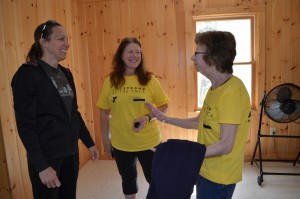 WESTFIELD- The Livestrong Foundation and the Westfield YMCA are partnering up once again to host an exercise class tailored to cancer patients and survivors beginning in September.

The 12-week program begins Sept. 9 and will be on Mondays and Wednesdays each week from 3:30 to 5 p.m. throughout the duration of the program. Westfield YMCA CEO Andrea Allard said that this will be the 11th session since they began holding them three years ago.

“We have people do it who are still undergoing treatment and people who have been cancer-free for 10 years,” said Sue Gaetz, one of the instructors for the program.

Allard and Gaetz said that they typically have 8 to 10 people doing the program in a single session, with a maximum attendance of about 12 to 15 survivors.

Gaetz said that the class is mostly one-on-one training with each person. They teach weight training and cardio exercises, as well as yoga and water exercises, to name a few.

Allard added that they will go on field trips to a Big Y supermarket, where a nutritionist will take them through the store and show them what foods would be best for them.

Gaetz noted that many of the people who take part in the program only do so once, but they often end up getting a YMCA membership afterwards anyway.

“I haven’t seen anyone who doesn’t enjoy it,” said Gaetz, “Most people come in with a positive attitude already, but I have seen a few who come in feeling very negative. I’m amazed that by the time they complete the program it’s like they’re a different person.”

Both Allard and Gaetz agreed that the comradery exhibited between the survivors in the program is huge for their motivation.

“One of the biggest things for the participants is that they are with other survivors and there’s a comradery and very strong relationships are formed,” said Allard, “They’re not in a medical environment. They’re in an environment of healthy wellness and healthy living.”

The program is free for all adult cancer survivors and patients looking to rebuild muscle mass, strength, and flexibility. It will be funded by the Jane Wensley Memorial Livestrong Golf Tournament on Saturday, Sept. 7. 100 percent of proceeds from the tournament will benefit the Westfield YMCA’s Livestrong Program.

The tournament is $65 to golf and $20 if one will only be participating in the lunch.