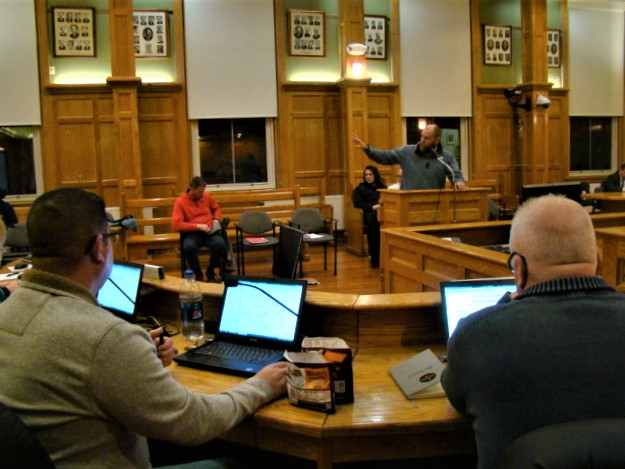 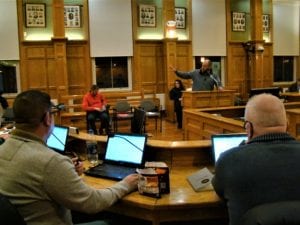 WESTFIELD – A zone change for 62 School St. from Business A to the Commercial Office Retail Enterprise (CORE) district will now go to a City Council subcommittee following a public hearing and positive recommendation at the Nov. 19 Planning Board meeting.
The zone change amendment was presented by Rob Levesque of R. Levesque Assoc. for WNG Holding, LLC c/o Patrick Berry.
Levesque disclosed that he has a Purchase of Sale agreement on the five acre parcel, which is comprised of the Westfield News Group building and parking lot and abuts R. Levesque Assoc. at 40 School St., which is in the CORE district.
The CORE district per zoning definition is designed to accommodate high intensity business uses appropriate for downtown locations and to set design standards consistent and complimentary to the historic architecture and streetscape design.
Levesque said the property is on the fringes of the CORE district, and currently the building does not meet the Business A zoning definition, but is a pre-existing, non-conforming use. He said Business A is designed for high traffic areas such as East Main Street and the Turnpike area.
Levesque said allowing it to be zoned properly would allow them to improve the property.
“CORE is more restrictive than Business A. Why would you want to make the change,” asked Planning Board member Richard Salois.
Levesque said due to setback and parking requirements in Business A. He said CORE does allow you to go vertical for parking. He said there is no intention to change the building, but would in the future allow a mixed-use building consistent with the CORE district.
“This is a nice little area to have a business in. It would allow us to clean it up and improve it,” Levesque said. He added that there is more activity in the area now than they’ve seen in the last 10 years.
Levesque also said, although CORE zoning would allow for multi-story development, in his opinion there is not the opportunity for such development in Westfield without being subsidized.
“I would expect that by the time I sell the property in 15-20 years, my building (40 School St.) would have value as a historic building,” Levesque said, adding that it was built in 1901.
“I love the idea,” said Planning Board member Cheryl Crowe, and asked whether the parking lot would be available to the city.
Levesque said the goal is to clean up the parking area and repave it, but that they would not police it. “We don’t need it at night,” he said.
Speaking for the proposal, 62 School St. owner Patrick Berry said that Levesque had eloquently described the project for the property, which he has owned for eight and a half years. He said by changing the zoning, it makes perfect sense for downtown.
No one spoke against the proposal.
The Planning Board voted for a positive recommendation on the zone change to the City Council, which is the authority. The matter will now go to the Zoning, Planning and Development committee for a recommendation, before going back to the City Council for a vote.