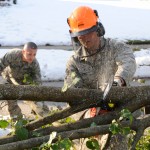 Staff Sgt. Sean Dowd, an aircraft avionics technician from the 104th Fighter Wing, cuts a tree apart in an effort to clear a road in Westfield. He and more than 50 saw-teams were activated to support clean-up efforts in the state following the unusual snow storm that hit the area. (Photo by Technical Sgt. Melanie J. Casineau)

The unmistakable buzzing of a chainsaw could be heard throughout the Westfield neighborhood of Munger Hill, as members of the Massachusetts Air National Guard shredded through downed tree limbs, after the damaging historic snowstorm that hit over the weekend.
Teams of 104th Fighter Wing Airmen, stationed at Barnes Air National Guard Base, were positioned throughout the picturesque suburban community, diligently cutting branches that loomed particularly low, as well as clearing roadways of debris, enabling full access to emergency response vehicles, utility crews and residents.
It was a scene repeated all over Western Massachusetts since Sunday morning. Many Guardsmen, most without power themselves, have been working since the storm hit, with little rest. Team members have been clearing the tree-filled landscape, or walking through the strewn tree limbs making welfare checks, or standing vigilant watch over the community members huddled in warming shelters.  The Guard could be, and still is, seen all around, supporting local recovery efforts.
Tech Sgt Gregg Harrison, a Springfield native, was leading a group of four Airmen as they cleared the street of a downed tree.
“It is good to help out in our community, especially when they are in need,” he said.  “We are here to help.”
A Munger Hill resident, Kirsten Thompson, was grateful for the Airmen’s assistance. The daughter of an Air Force Colonel, she was effusive in her praise, “Chainsaws are music to my ears.  We are very appreciative of the local Guard’s response.”
Many of the same Guardsmen volunteered for the recovery efforts after they performed a similar mission when the tornadoes hit five months ago, and, more recently, after the flooding following Tropical Storm Irene.
“Omigosh! They have helped us numerous times. Tornadoes, floods, hurricanes – they are there whenever we need them,” said resident Leslie Hanson. When speaking of the 104th Fighter Wing, she expounded on their importance to the community, and how they will always be welcome in this neighborhood.
As the clean-up operations come to a close, the Guard has had nearly 2,000 members supporting the Operation dubbed “Harvest Snow”, for an excess of a week.  The 104th Fighter Wing supplied nearly 100 of those positions. Since the first day of the snowstorm, the Guard has cleared over 200 miles of roadway in 19 communities across the commonwealth, as well as performed 3,800 health and welfare checks – proudly responding to the state’s call for help.