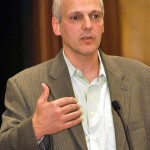 WESTFIELD – City Council members questioned emergency response officials Thursday night, asking about coordination of resources during recovery efforts following the Oct. 29 snowstorm, which knocked down trees and power lines across the city.
At-large Councilor John Beltrandi commended city departments for their response efforts, but suggested that, in future disasters, the Westfield Gas & Electric Department should be the “point agency” in assigning resources.
“I’m trying to get the WG&E to be the point agency when these disasters happen, so they can get together with the (Westfield) Emergency Management Agency (WEMA) and the Department of Public Works to get the assets where they are most needed,” Beltrandi said.
“This was a terrific response by city departments,” Beltrandi said.
WG&E crews spent much of their time in the early response stage cutting fallen trees and limbs to gain access to downed power lines.
Jim Wiggs, emergency management director, said that the municipal utility has personnel involved in the emergency response network, to facilitate communication with other departments and contracted resources.
The issue is a chicken and egg situation. Clearing crews were told not to cut limbs and trees in contact with wires, debris that had to be cleared to allow access by power crews attempting to restore electrical service.
Wiggs also said that the local emergency response structure is an extension of the Federal Emergency Management Agency (FEMA) and the Massachusetts Emergency Management Agency (MEMA). FEMA provides funding reimbursements for up to 75 percent of the cost of recovery works, funds channeled through MEMA to the city through WEMA.
MEMA allocates state resources, such as National Guard and Air National Guard personnel, who were dispatched to the city this week to help clearing streets of debris.
“It was harder to get resources because this was a regional event,” Wiggs said. “We were 24 to 36 hours into the response when we started to get resources. Meetings are held daily to determine where those resources are needed and what is available.”
Wiggs said the emergency response structure at the federal and state level are cumbersome and that communication at the local level will be reviewed.
“In a couple of weeks, I’ll do an after action report with the key responders,” Wiggs said.
That effort will focus on communication with local residents, fuel reserves and availability, as well as equipment failures.
The city has a mass telephone broadcast capability that failed in this emergency, because of the number of phone lines taken down by trees and limbs.
“I sent out 1,600 calls and 1,200 failed to go through,” Wiggs said. “People need to go onto the city’s emergency management website and register their cell phones.”
At-large Councilor Gerald Tracy suggested that the city require all gasoline stations be equipped with emergency generators to have the capability to dispense fuel.
“A lot of stations had fuel, but it was in the ground (holding tanks) and couldn’t be accessed because the stations did not have power,” he said.
Tracy also suggested that the city rely more on radio broadcast capabilities to keep residents informed.
Robert Sacco, chairman of the Municipal Light Board, said that the fact that the entire northeast area of the country was impacted by the storm slowed the response process.
“This storm taxed the (WG&E) utility like no other in our history,” he said. “Utilities have agreements to support each other, but because the entire region got hit, many of the closer utilities in New York and Connecticut could not respond.
“The good news is that we’re down to 800-1,000 customers who do not have power,” Sacco said. “There are pockets (without power) throughout the city. We hope to have the vast majority of those residents back on line (today).”
Sacco said part of the response issue is the character of the snow storm.
“Most utilities and emergency managers were surprised by the magnitude of this storm, because we didn’t have preparation time like we did with the hurricane, that we knew was coming for a week. With this storm we had 24 hours notice,” Sacco said. “In a couple of weeks we’ll tweak the response process.”