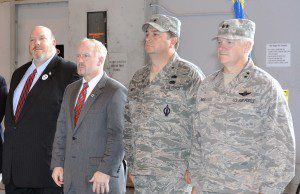 WESTFIELD – The 104th Fighter Wing held a Commanders Call with a change of command, offered awards and honored its Hometown Heroes during an hour-long ceremony Saturday.
Approximately 200 members of the wing who deployed over the past year were honored as Hometown Heroes in recognition of being deployed more than 30 days since the beginning of Operation Noble Eagle in 2001.
The families of the deployed were also recognized for their support and the children of the deployed members were given “We Serve Too” medallions.
Westfield’s own Christopher Pinney, a tech sergeant, has been deployed three times. This last one, however, was the toughest.
“This was my first deployment since I had my daughter,” Pinney said. “I think I was worse off than she was!”
Pinney said his wife, Amy, deserves a lot of credit for taking care of their daughter, Olivia, 3, while he was gone.
“My wife had to become a single parent,” he said. “She is the reason I can do what I do.”
Pinney is a full-time member of the 104th. He started as a traditional guardsman and took a full-time opportunity when it was offered.
“It’s a great place to work,” Pinney said. “I love being here.”
Pinney said he was inspired to join the air guard by his grandfather, who was a member of the Massachusetts Army Guard.
During the ceremony, Col. Peter Green was appointed commander of the 104th Maintenance Group, taking the reigns from Lt. Col. Robert Henry.
Henry is a career guardsman who has served as commander of the maintenance group for more than a year.
Henry said he is proud of the wing’s accomplishments.
Under his command, the 104th achieved a score of 98 in a recent inspection, which was the highest score received by a fighter wing at that time.
Henry said during the wing’s recent 90-day deployment, there were zero maintenance non-deliverables.
“To not have any MNDs speaks highly of the technical skills of this workforce,” said Henry.
Because of Henry’s record and vast experience with F-15s, he was asked to guide the wing as it prepares for an important inspection set for 2013.
Members of the unit received meritorious service awards Saturday, including Lt. Col. Denise Boyer.
Boyer joined the 104th last year after spending six years at the Air National Guard headquarters in Washington, D.C. where she was in charge of the asset management division. Boyer was honored for her work in D.C.
Both Boyer and Henry grew up in military families and moved throughout their lives. Boyer said she has moved many times throughout her own military career. She is a Title 10 guardsman, which means she serves in a federal capacity and her commander in chief is the President of the United States. Most guardsmen are Title 32 guards, which means their commander in chief is the state governor of their unit.
Boyer said the Air National Guard has changed over the years.
“The guard is becoming more and more like the active duty,” she said, noting that drills, exercises, and deployments have become more inline with active duty military.
Henry praised Boyer’s accomplishments.
“She has brought great capabilities to the guard,” he said.
MSSgt. Andrew Sharp was also honored with a meritorious service medal. Sharp has more than 30 years of military service, 16 of which has been spent at the 104th.
Sharp is retiring and said he is “very proud” to serve and that the work is “very fulfilling.”
“We are like a family here,” Sharp said. “It is a home away from home. The 104th has been good to me.”