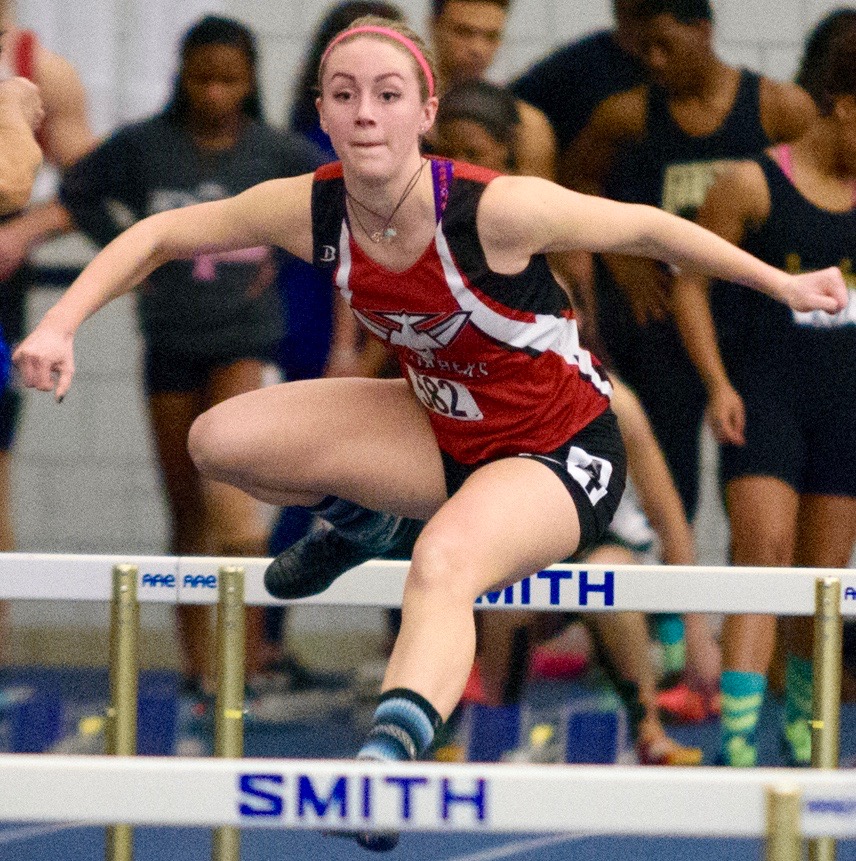 BOSTON – The phrase “to boldly go where no man has gone before” is typically reserved for fanboys and girls of “geek culture,” where comics, sci-fi, video games, Star Wars and Star Trek dominate daily life.
On Wednesday night, the Westfield High School girls’ indoor track team went where no other previous team went before it – 10th place in the state championships. While the outcome may have seemed more like a fantasy in the minds of some, that dream truly became a reality for the Lady Bombers.
The Westfield girls’ indoor track team posted the best ranking of any Western Massachusetts team and its highest finish in school history, securing ninth place with 17 points at the Reggie Lewis Center in Boston.
Needham won the girls’ championship title with 60 points, followed by Wellesley (54.33) and Mansfield (45).
“I think that the track and field program, over the years, has become a sense of pride for a lot of our athletes,” Westfield girls’ track coach Linda Rowbotham said. “It’s amazing what these athletes do with only being able to train in the halls of Westfield High School.” 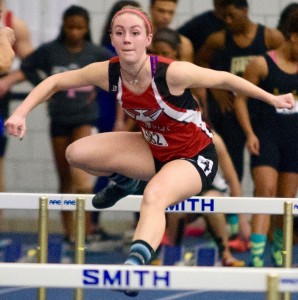 Westfield senior Morgan Sanders made the leap from the hallways to hallowed ground with a silver medal finish in the 55-meter hurdles. Plymouth South junior Madelyn Sessler (8.45) just edged out Sanders’ second place time of 8.49.
Sanders also placed sixth in the long jump (16-2.25).
Westfield nabbed two top 15 finishes in the 2-mile run. Taylor White finished fourth in a time of 11:46.92. Sophia Gronbeck was 12th (12:39.14).
White also helped anchor the Bombers’ 4×800 relay team – alongside teammates Katrina Arona, Carley Sensabella, and Mia McDonald – which finished 10th overall, but more importantly set a new school record (10:23.05).
Mia McDonald placed 8th in the 1000 meter run (3:11.60), and twin sister, Moira, was 12th in the 300 meter dash (43.92).
“The growth of these athletes has been amazing,” coach Rowbotham said. “A lot of these athletes have committed to track as their primary sport. That is why you see stuff happening. We have athletes going on to Division 1, 2, and 3 colleges, getting scholarships. That’s saying something.”
In each of the last two years, Westfield has made the jump up the final standings. The Bombers finished 19th at states in 2014, and 15th a year ago.
Westfield was also awarded the Massachusetts Interscholastic Athletic Association Joan Doherty Team Sportsmanship Award, also a first for the program.
Notes: Westfield male track athlete Ryan Prenosil, a junior, took second place in the 600 meters (1:23.84). Jeffrey McConkey also cracked the top 10, taking ninth in the 300 meters (37.20) … Local fans will get a chance to see several of these athletes and others this spring when the Bombers’ track and field team host a double dual meet at Westfield State University. Circle the date on your calendars – April 23.