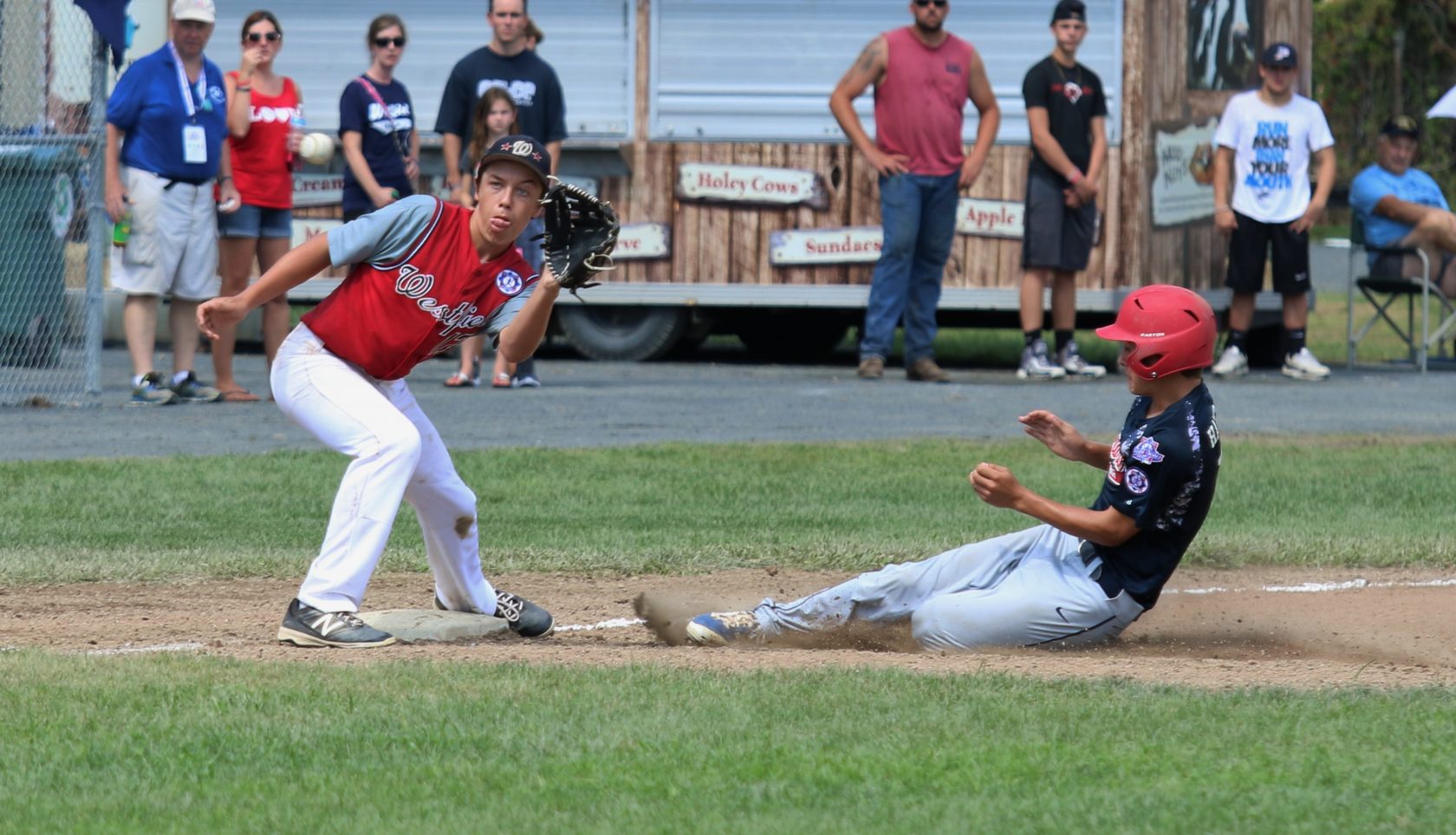 WESTFIELD – Welcome to the 2016 Babe Ruth Baseball 14-Year-Old World Series Westfield!
Westfield made a strong showing in its second game of the World Series, rallying from an early three-run deficit but fell late as Bismarck (N.D.) surged past the host team 9-6 Saturday morning.
“First couple innings, we had our bats somewhat rolling. Then we just made a little errors, and gave up a couple runs,” said Bismarck No. 2 batter Darin Nolz, who finished 3-for-4 at the plate. “I thought as a team we finished out the game really good. 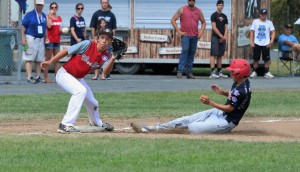 Westfield‘s Colby Gazda is looking for the out at third against Bismarck (N.D.) during the Babe Ruth World Series Saturday morning. (Photo by Kellie Adam)

Westfield stumbled out of the gate, getting thrown out while attempting to stretch a single to a double on an overthrow in the first and committing a first-inning error.
Bismarck jumped out to a 3-0 first inning lead. Darin Nolz got his team started with a one-out, bunt-single, followed by a single from Cade Feeney. An infield error loaded the bases. Luke Domres plated the first run with a sac-fly, and Cameron Miller followed with a line drive hit that resulted in two more runs.
Westfield threatened in the third with Jack Masciadrelli reaching on a one-out walk and Mason Collingwood single – a high-hopper over the third baseman – but Bismarck pitcher Skyler Riedinger recovered to force a ground out and fly out to end the threat.
Westfield arrived in the fourth inning.
In the fourth, Westfield loaded the bases with a Josh Lis single, C.J. Skribiski walk, and Colin Scanlon two-strike bunt. An infield error on Michael Hall’s hard-hit ball to third base got the home town team on the board. Then Matt Pelletier unleashed a booming three-run double that echoed throughout the Whip City and cleared the bases to give Westfield a 4-3 lead. Mason Collingwood tacked on one more run with a two-out RBI single to cap off a five-run fourth.
Bismarck responded, scoring four runs in the bottom half of the inning to reclaim the lead. The big hits in the inning included a Feeney two-run single, a fielder’s choice RBI, and a Domres RBI hit. North Dakota led 7-5.
Westfield reclaimed one run in the sixth inning, but Bismarck responded with two more in the sixth – a run-scoring, sac-fly from Miller and an RBI single – to take a 9-6 advantage.
“We’ve been through that a couple times in the state tournament,” Nolz said about his team falling behind.”I think that we all knew that we were going to get back the lead or even tie it, and we knew that even though we were the home team that we were going to finish it.”
Westfield catcher Jack Masciadrelli continued his mastery behind home plate. The Whip City catcher threw out a base runner for the third time in two games. He tossed out to two in Thursday night’s opener.
“It was a good baseball game,” Westfield manager Matt Avery said. “A couple defensive miscues cost us … More than ever, errors are going to cost you in a World Series.”
Avery said the energy translated much better in his team’s second game of the tournament.
“We were competitive all the way,” the Westfield manager explained. “I thought we hit the ball much better.”