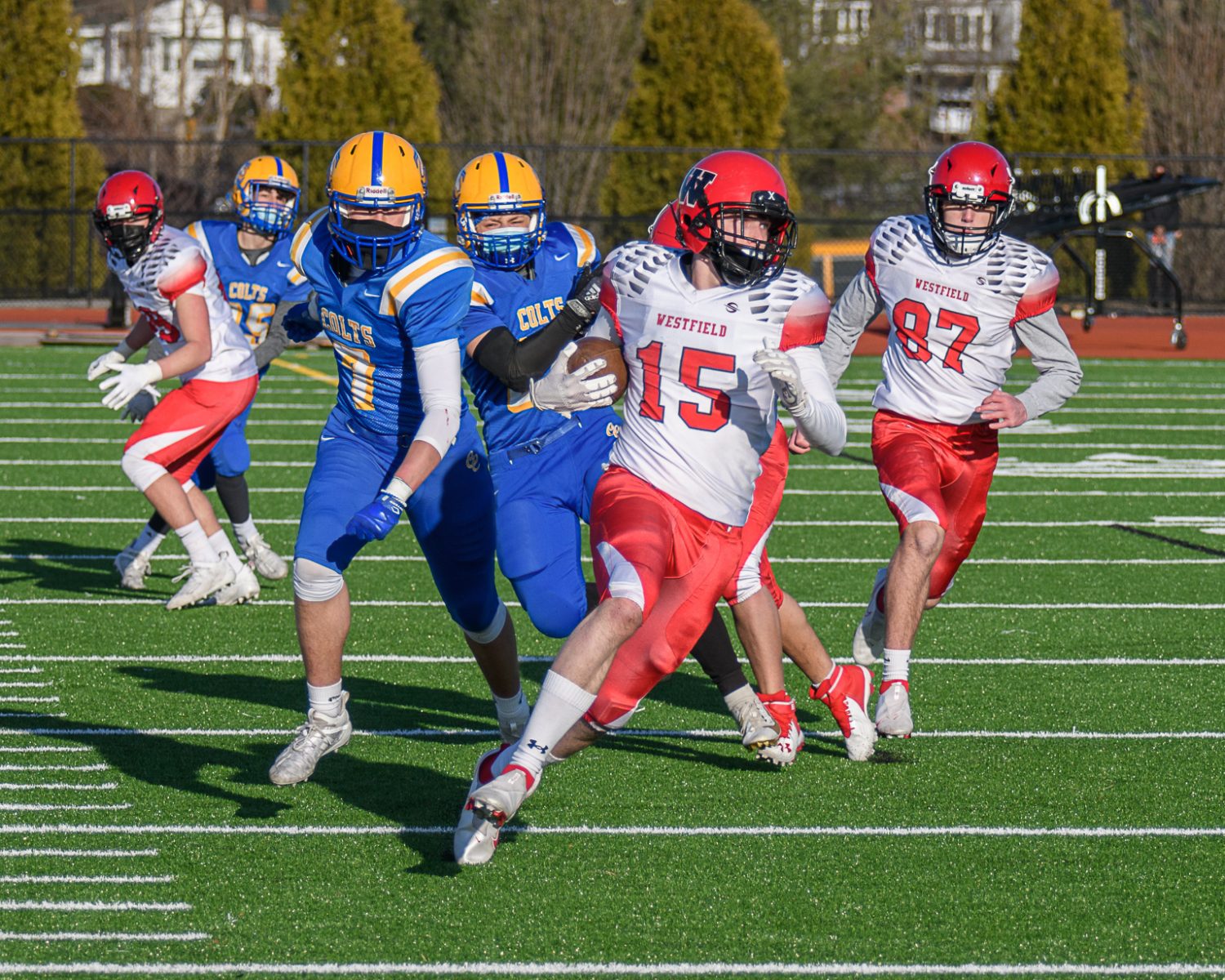 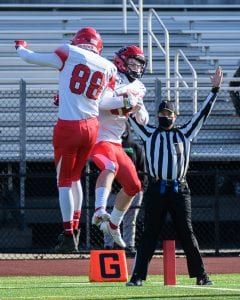 CHICOPEE – During the high school football season, the weather typically goes from warm to cold. The pandemic flipped the fall sports season – – and the entire world for that matter – – upside down. Now, temperatures will rise during the months of March and April as football teams finally compete in what is being dubbed, “Fall II.”
That being said, the Westfield Bombers were hot from the get-go despite the chill in the air.
On a frigid evening Friday, Westfield junior quarterback Matt Adamites threw for three touchdowns and the Bombers cruised to a 35-0 shutout of the Chicopee Comp Colts in a high school football season opener.
Chicopee Comp’s best effort came on Westfield’s first drive. The Bombers moved the ball to their opponent’s 11 yard line but were stuffed on fourth and one.
Chicopee Comp took over, and on its next drive on fourth down, snapped the ball over the punter’s head and through its own end zone for a safety.
On its second possession, Westfield would not be denied. After taking over near midfield, the Bombers drove 52 yards in nine plays. The drive culminated with Adamites hitting sophomore wide receiver Conor Connally for an 11 yard touchdown pass completion with 1:48 remaining. The extra point failed. 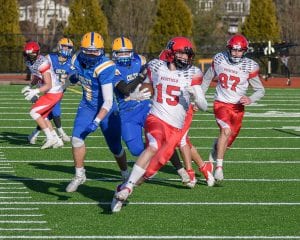 Westfield’s William Brewster (15) cuts back to the middle of the field for a 62 yard return for touchdown with 5:15 remaining in the second half. (MARC ST.ONGE/THE WESTFIELD NEWS)

Westfield had equal success on its next drive, scoring when Adamites connected with sophomore wideout Andrew Scott for a 23 yard pass with 11:47 left to take a 14-0 advantage.
Westfield charmed its way to a third straight touchdown. The Bombers started on their own 43 yard line and needed just five plays to punch the ball into the end zone. Sophomore running back Christopher Barber scored from 10 yards out to make it a 20-0 ball game. Barber ripped off a 38 yard touchdown run on its first play from scrimmage, putting the team into the red zone.
Chicopee Comp’s special teams unit wilted under Westfield’s defensive pressure again, snapping the ball into the end zone. A Colts special teamer kicked the ball out of the end zone to avoid the Bombers pouncing on the ball for a touchdown, but still lost two points in the process.
Westfield took over and – – surprise – – scored again. Bombers’ senior Will Brewster returned the ensuing kickoff 62 yards for a touchdown and a 28-0 lead.
Adamites tossed another touchdown late in the first half, a strike to Scott in the corner of the end zone, to go up by five touchdowns.
Both teams went scoreless the rest of the way.
“Our energy that we started with just carried us along in the game,” Adamites said. “It didn’t feel like I was playing a real game but I got into the hang of things. …I started to feel more calm and then everything began to go smooth.”
Westfield High football coach Rob Parent commended Adamites on his opening day performance and applauded his team for its efforts.
“I thought Matt did a really good job taking command of the offense, and when the play needed to be made he made the play,” coach Parent said. “I thought our guys executed the game plan really well and we were able to capitalize on the mistakes from Chicopee (Comp). We scored, turned them into points. That’s signs of a good team.”