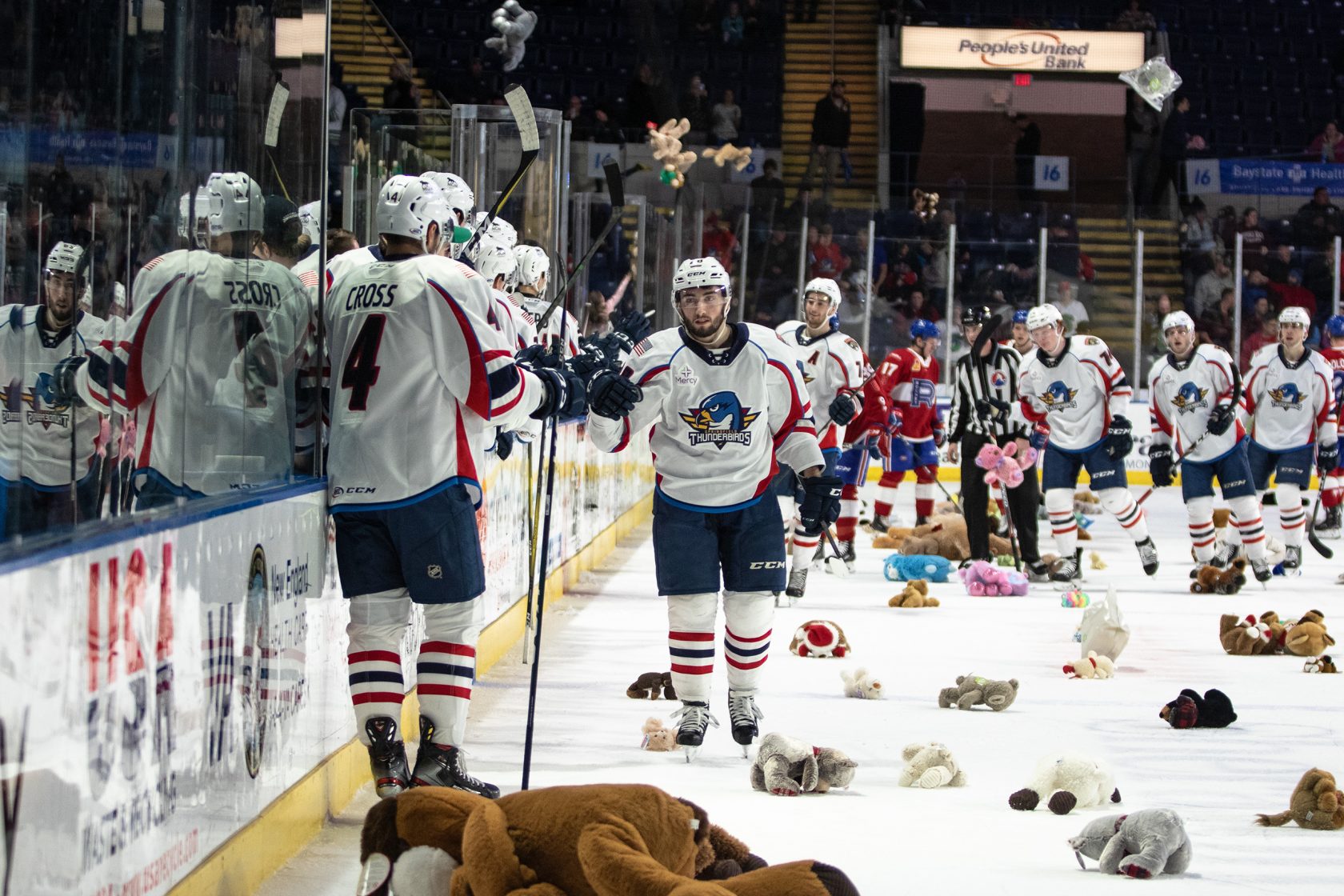 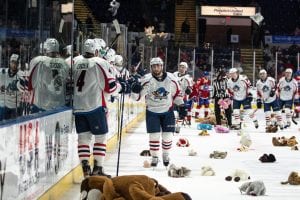 SPRINGFIELD – The Springfield Thunderbirds (14-13) saw their fans launch 4,887 bears onto the ice as part of the 4th Annual Teddy Bear Toss pres. by Teddy Bear Pools & Spas, but they fell, 4-3, against the Laval Rocket (14-10-3-0) on Saturday night at the MassMutual Center.
The teddy bears would have to wait after Jake Evans opened the scoring on a Rocket power play at 7:42 of the first. Springfield goaltender Philippe Desrosiers stopped the first two Laval power play shots, but off a face-off, Evans deflected a Josh Brook shot in behind the goal line to vault the Rocket to a 1-0 lead.
Just 39 seconds later, ex-Rocket Daniel Audette continued his reign of terror on his old team, beating Charlie Lindgren over the right-hand catching glove to bring the 4,887 bears down from all areas of the MassMutual Center to tie the game, 1-1.
After the clean-up, and with an injured Lindgren replaced by Keith Kinkaid in the Rocket net, the T-Birds just kept gaining steam, and on their first power play of the night, Thomas Schemitsch scored his first goal of the season on a one-time slapper past Kinkaid at 18:36, from Dryden Hunt and Audette.
Springfield’s power play, 4-for-6 on its first half-dozen power plays against the Rocket in two games, picked up another one at 11:52 of the second. Hunt parked himself on the goal line, and after Anthony Greco forced a rebound on jam shot from the left side, Joel Lowry pried the puck free to tap it over to Hunt, who lifted his second goal of the season into the top shelf.
Despite holding the 3-1 lead into the third period, the Thunderbirds could not hold off the charging Rocket in the final period. Evans picked up his second goal when he crashed the back pipe and deflected a Ryan Poehling pass into the net behind Desrosiers to make it 3-2 at 3:14.
Just over three minutes later, the Rocket got the game even when Kevin Lynch deflected a point shot to the short side of Desrosiers at 6:23 to tie the game, 3-3.
Springfield had a pair of power play chances to retake the lead, but Kinkaid steadied his game, finishing with 23 saves on 25 shots in relief.
The Rocket used their power play to complete their comeback as Riley Barber jabbed a backhand rebound past Desrosiers with just 3:22 to play to give Laval a stunning win.
Springfield will look to get back on track on Friday night as they welcome the Binghamton Devils to the MassMutual Center at 7:05 p.m.
?For more ticket information or to become a 2019-20 Springfield Thunderbirds ticket package member, or to purchase single game tickets, call (413) 739-GOAL (4625) or visit www.SpringfieldThunderbirds.com. – Courtesy of Springfield Thunderbirds.