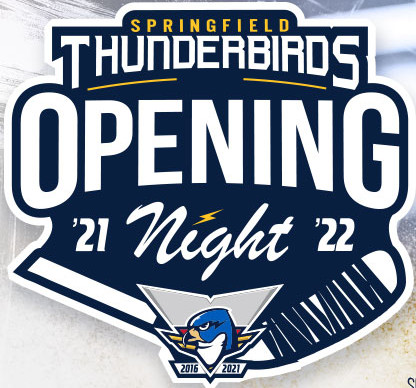 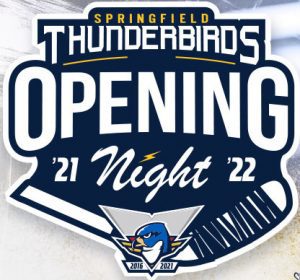 SPRINGFIELD – The Springfield Thunderbirds, in conjunction with the American Hockey League, recently released their full schedule for the 2021-22 regular season. The season marks the first year in the Thunderbirds’ new affiliation agreement with the NHL’s St. Louis Blues. It will also be the 5th Anniversary season of Thunderbirds hockey after the club opted out of the abbreviated 2020-21 campaign.
For the second straight occasion, the Thunderbirds will begin their regular season on home ice when they play host to the Hartford Wolf Pack on Sat., Oct. 16 at 7:05 p.m. inside the MassMutual Center for Opening Night. It marks the first of six contests on home ice against the I-91 rivals, as the Wolf Pack will also visit Springfield on Fri., Nov. 12, Sat., Nov. 27, Sat., Dec. 18, Fri., Feb. 4, and Fri., Feb. 25.
The Thunderbirds’ 2021-22 schedule features new puck drop times on a handful of occasions, including matinee 2:05 p.m. Saturday games on Nov. 27 vs. Hartford and on Jan. 1 vs. Rochester. The team will also play host to 6:05 p.m. contests on Wednesdays (Nov. 24 vs. Bridgeport and Dec. 29 vs. Utica).
Finally, Saturday night game times in April will be shifted to a 6:05 p.m. puck drop, as Springfield will host Belleville on April 2, Charlotte on April 16, and Wilkes-Barre/Scranton on April 23.
The Thunderbirds will once again compete in the AHL’s Atlantic Division, and Springfield will face every Eastern Conference team at least twice during the 2021-22 regular season, with the exception of the Cleveland Monsters. The 76-game regular season schedule includes 38 home and 38 away games. Springfield is one of 10 AHL teams that will play a 76-game slate this upcoming season. Division rivals Hershey, Lehigh Valley, and Wilkes-Barre/Scranton will also play 76 contests, while Bridgeport, Charlotte, Hartford, and Providence will each play 72 games.
The staggered schedule in 2021-22 will be the final such season in the AHL, as all 32 member clubs, including the new Seattle Kraken affiliates in Palm Springs, Ca. will play 72 games in the 2022-23 regular season.
Springfield will play a total of 62 games against Atlantic Division opponents, including 31 at the MassMutual Center. One of the Thunderbirds’ most common opponents in 2021-22 will once again be the Providence Bruins, who will visit the MassMutual Center on six occasions. The Bruins make their first trip to Springfield on Sat., Dec. 11 for a 7:05 p.m. start. Other matchups in Springfield between the T-Birds and Bruins are slated for Sat., Jan. 15, Sat., Jan. 29, Sat., Feb. 12, Sat., March 5, and Sun., April 24.
The Thunderbirds will host their fourth T-Birds 101 School Day Game in the month of March against the Bridgeport Islanders at 10:35 a.m. on Weds., March 16. The Islanders will make five other trips to Springfield prior to the School Day Game. Those contests are scheduled for Sun., Oct. 17, Fri., Oct. 22, Sat., Nov. 20, Weds., Nov. 24, and Weds., Feb. 23.
The Charlotte Checkers will make four visits to the MassMutual Center as familiar foes, as they will now feature the AHL prospects from both the expansion Seattle Kraken and the Florida Panthers. Springfield and Florida were affiliated for the Thunderbirds’ first four AHL seasons from 2016-2020. The Checkers, who hoisted the Calder Cup the last time the trophy was awarded in 2019, will visit the Thunderbirds on Sun., Oct. 31, Sat., Feb. 26, Fri., April 15, and Sat., April 16.
The Thunderbirds will also play 14 games (7 home, 7 away) against teams from the AHL’s North Division, including a back-to-back set with the Belleville Senators on Sat., April 2, and Sun., April 3 at the MassMutual Center. The Laval Rocket (Fri., Jan. 14), Rochester Americans (Sat., Jan. 1), Syracuse Crunch (Weds., April 13), Toronto Marlies (Fri., Dec. 10), and Utica Comets (Weds., Dec. 29) will each make one visit to the MassMutual Center. – Courtesy of the Springfield Thunderbirds 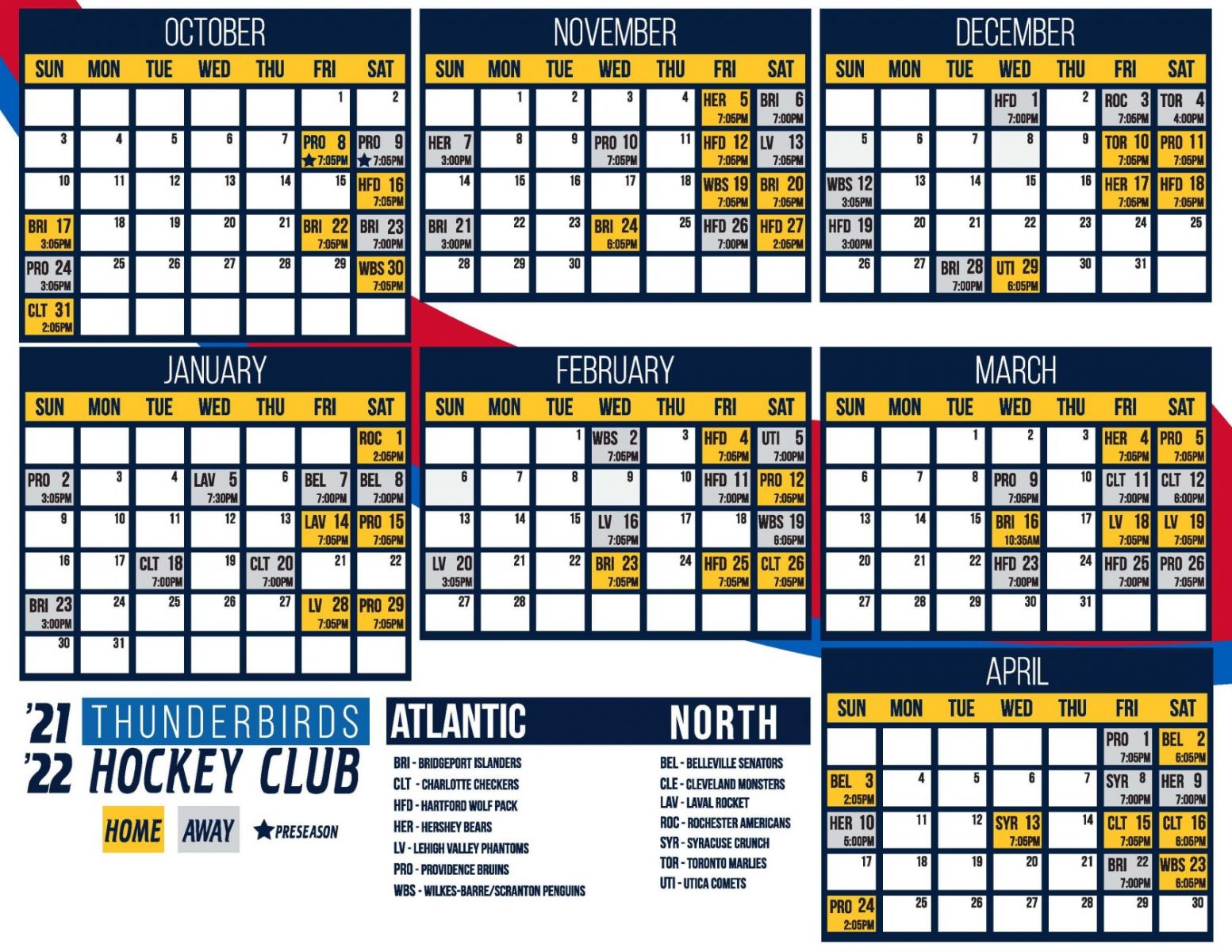