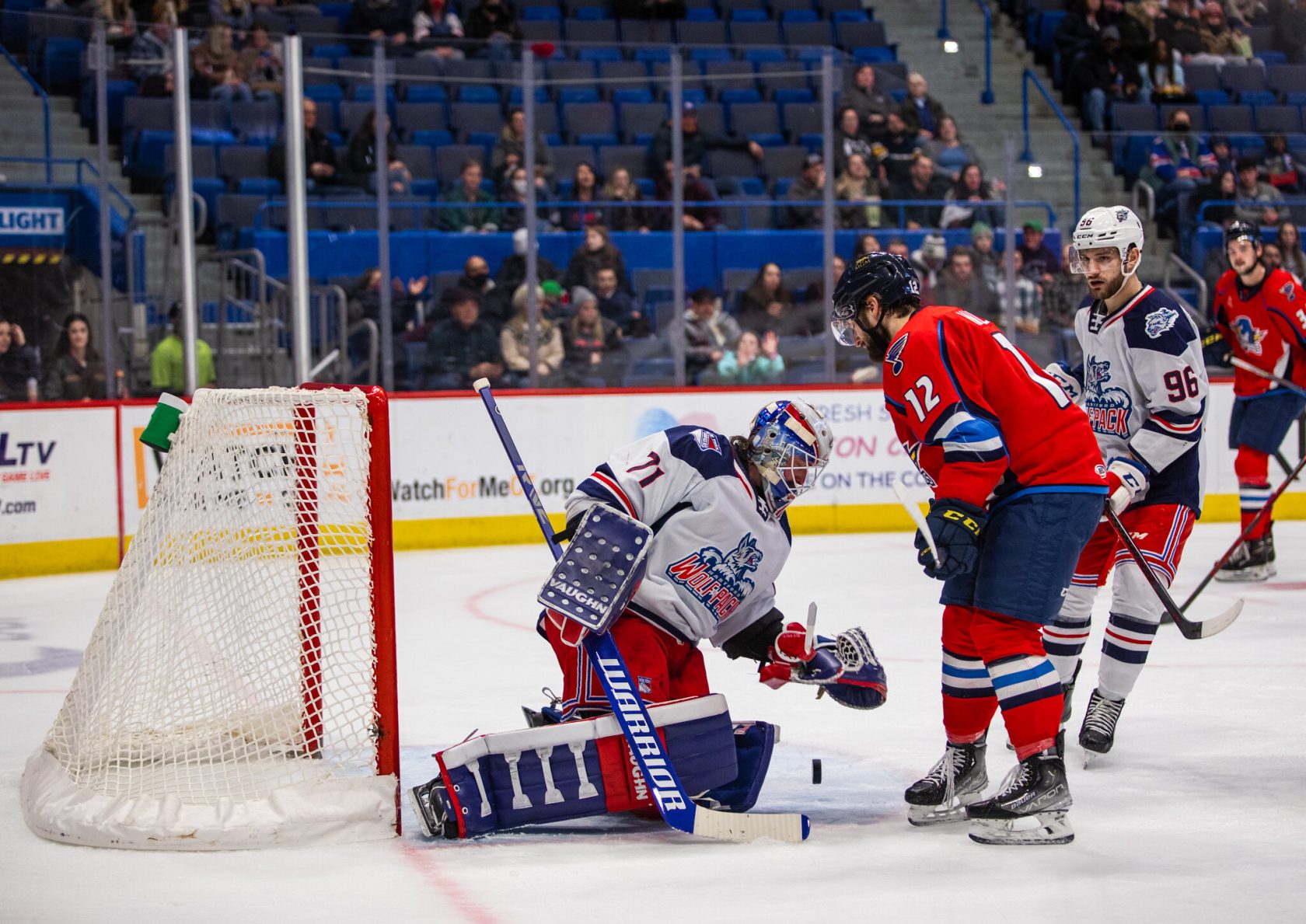 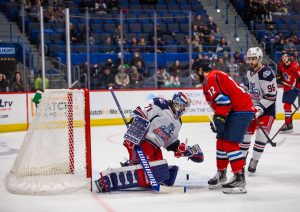 The Hartford Wolfpack snapped the Springfield Thunderbirds season-long win streak Friday night. The T-Birds avenged that loss one day later in a rematch between the two teams. (SPRINGFIELD THUNDERBIRDS PHOTO)

HARTFORD, CONN. – The Springfield Thunderbirds succumbed to a second-period surge from the Hartford Wolf Pack in a 5-3 loss on Friday night at the XL Center. The defeat snapped the T-Birds’ season-best five-game winning streak.
Springfield’s special teams were a little extra special in an opening period that saw them take a two-goal lead despite having just five shots on goal in the frame. After killing off an early penalty, the T-Birds’ power play got its first crack past the midpoint of the period. After being held off the scoresheet in his past four games, Nathan Todd changed that as he ripped a wrist shot from the left-wing circle under the crossbar behind Keith Kinkaid to make it 1-0 at 12:44.
The Thunderbirds’ penalty kill was called back into action almost immediately after, and not only did they complete a second successful kill, but they added an offensive punch of their own. Tommy Cross cleared a puck to a waiting Nathan Walker in the neutral zone. Walker moved into the Hartford zone on the left side to create a 2-on-1 with Mackenzie MacEachern, and MacEachern made no mistake with a one-time slapper from the middle of the ice that eluded Kinkaid and gave Springfield a 2-0 lead just 1:41 after the Todd goal.
Looking for his sixth win in seven starts, Joel Hofer started his night in sturdy fashion, turning away nine Hartford shots in the first, including four on the Wolf Pack’s power-play chances.
Much the same way the game script materialized on Nov. 12 in Springfield, the Wolf Pack had a major rebuttal in the middle period. Zac Jones, who helped spearhead the Wolf Pack’s come-from-behind win two weeks ago, got Hartford on the board for the first time just 34 seconds into the second when he maneuvered into the right-wing circle on an activated rush from his blue line position. He was able to sneak a backhander through Hofer’s legs, and the T-Birds lead got trimmed to 2-1.
Just 4:16 later on a power play, the Wolf Pack got even as an initial shot by Jones leaked behind Hofer’s pad, and Jonny Brodzinski won the race to the loose change to tuck the rebound home to tie the game, 2-2. 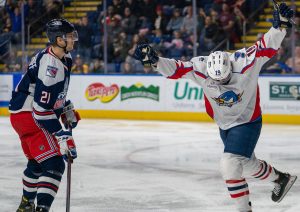 The Springfield Thunderbirds celebrated a win in a rematch with the Hartford Wolf Pack on Saturday. (SPRINGFIELD THUNDERBIRDS PHOTO)

Springfield did not lack chances to add to their total in the middle period, but Kinkaid answered the bell from a tough first period to stop all 15 shots he saw in the second, and he got some help from the goal post as Matthew Peca narrowly missed giving the T-Birds a 3-2 lead on a power play. The Hartford penalty kill went 3-for-3 in the middle frame as well.
Moments after one of those kills, Lauri Pajuniemi got the Wolf Pack on top with a curl-and-drag move to the slot area before backhanding a shot through Hofer on the stick side at 11:37 of the period.
Hartford’s power-play then bolstered the lead as veteran blueliner Anthony Bitetto found a lane through traffic at 17:17, beating Hofer upstairs to give the Wolf Pack a 4-2 lead heading into the third. The man advantage added one more when Tim Gettinger deflected a Tarmo Reunanen shot past Hofer at 1:19 of the third period to make it a 5-2 game.
On a night littered with man-advantage opportunities, the T-Birds got one back at the 16:15 mark as Walker found a loose puck around the crease area to beat Kinkaid while the T-Birds were on a 6-on-4 advantage. Springfield’s power play went 2-for-7 for the game, but the Wolf Pack’s 3-for-5 man advantage proved too much to overcome.
The Springfield Thunderbirds got some payback against the Hartford Wolf Pack on Saturday afternoon though, taking a 4-2 decision over their I-91 rivals before a crowd of 6,015 inside the MassMutual Center.
Picking up where they left off on Friday night, the Hartford power play continued its red hot run to take an early lead at 4:55 of the first. Former T-Bird Anthony Greco raced down the right wing, cut to the middle on a defender, and found Ty Ronning in the low slot for a one-time blast that beat Charlie Lindgren to make it a 1-0 game.
Hartford goaltender Adam Huska entered the game with a 1.81 goals-against average and was at his best in the first period, stopping all 13 Springfield shots that came his way to keep the Wolf Pack lead intact heading into period two. Lindgren kept it a 1-0 game thanks to a flashy right-glove save on a Brodzinski breakaway with less than two seconds on the clock in the period.
That stop by Lindgren proved to be a massive turning point for the T-Birds, who got the game equalized just 3:03 into the second with a little bit of lady luck on their side. After Steven Santini blistered a one-time slapper wide of the goal, Alexey Toropchenko and MacEachern poked away at the loose rebound, and eventually MacEachern got it to bounce up in the air over Huska, who had lost his stick in the fray. MacEachern extended his goal streak to three consecutive games to get the T-Birds back on even footing, 1-1.
Springfield followed that up with its first power play of the day, and Sam Anas surprised Huska with a low wrist shot from the left circle that slipped between the Wolf Pack goalie’s pads to make it a 2-1 game at 8:36. Anas snapped a personal seven-game goal drought with the tally.
Nikita Alexandrov followed Anas’s lead and broke his own seven-game drought at the 11:10 mark as he circled the offensive zone to the right-wing circle before snapping a wrist shot through traffic and past Huska to make it a 3-1 game.
Lindgren help up his end of the bargain as well, stopping all eight Hartford shots in the middle period, including a remarkable skate blade save on a Brodzinski breakaway backhander with the score just 2-1.
Springfield further bolstered its lead at the 3:09 mark of the final period when Matthew Peca found a rebound in a sea of traffic outside the crease area to deposit his 10th goal of the season past Huska and make it a 4-1 lead.
Hartford did not go down quietly, as Zac Jones beat Lindgren through heavy traffic at 12:18 to get the Wolf Pack back within two goals, 4-2. The Wolf Pack then drew a late power play, but the Springfield penalty kill bounced back from a tough Friday night to finish its evening 3-for-4 in dispatching Hartford advantages.
Lindgren finished his day with 24 saves to win his fifth consecutive game. In that time, he has stopped 122 of the last 128 shots he has faced. Springfield maintains its hold of first place in the Atlantic Division, and the T-Birds became the first team in the AHL to reach 30 points on the season.
Springfield (14-3-2-0) now embarks on a three-game road trip, beginning with a third straight tangle with the Wolf Pack (12-4-2-0) on Wednesday night at 7:00 p.m. at the XL Center. – Courtesy of Springfield Thunderbirds