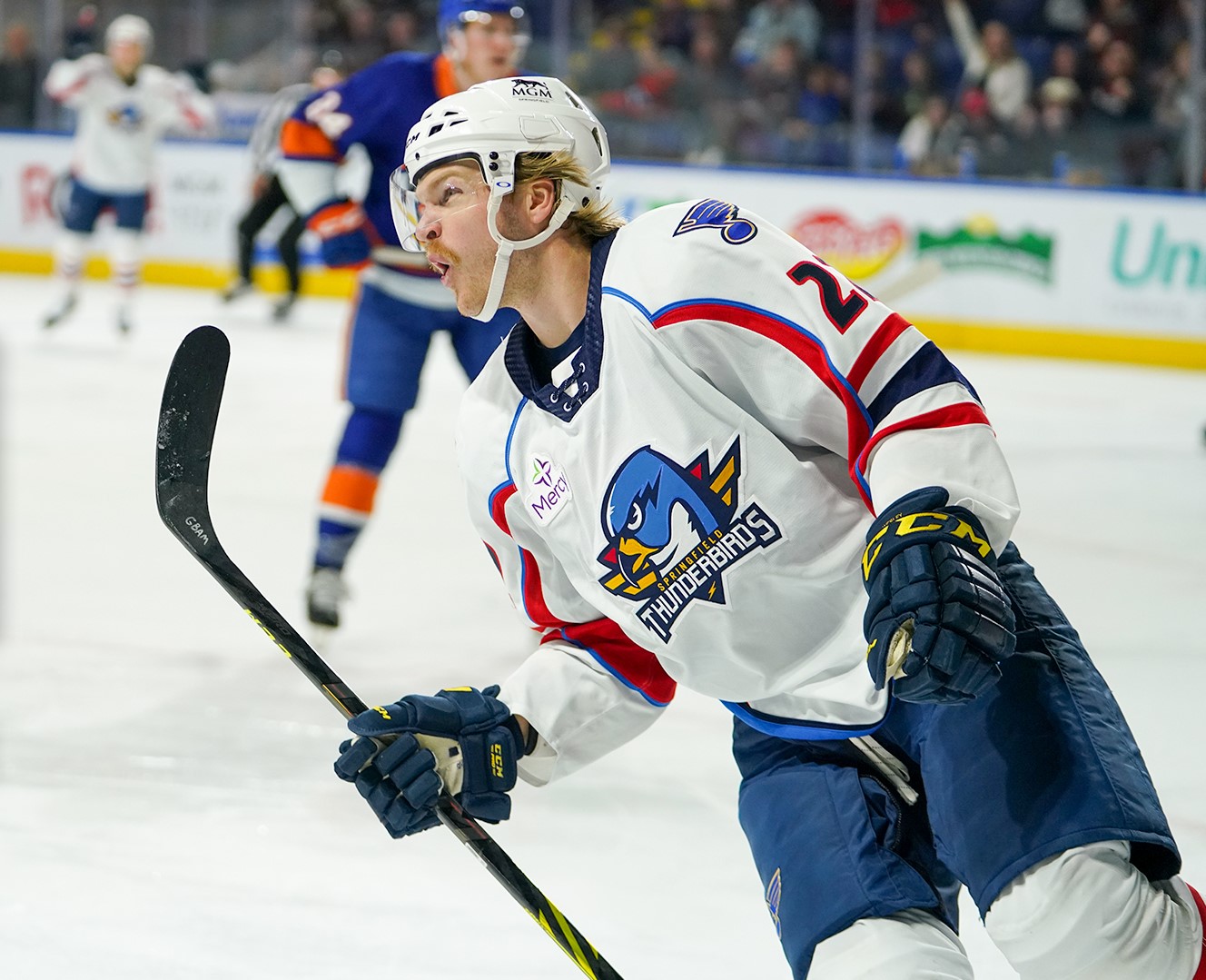 SPRINGFIELD – The first place Springfield Thunderbirds (13-2-2-0) completed a three-game sweep of the Bridgeport Islanders (5-10-1-2) and captured their fifth straight win overall in a 4-1 win on Wednesday night at the MassMutual Center.
Springfield’s offense gave Bridgeport goaltender Cory Schneider plenty of work in the opening 20 minutes, using three power plays and steady offensive pressure to post 19 shots on net over the opening stanza. However, the Islanders defense never buckled in front of Schneider, and a perfect 3-for-3 penalty kill supplemented Schneider’s stellar start to the game.
At the other end, Charlie Lindgren, who entered with a 6-1-1 record in his first eight starts, saw just eight shots, but his rebound control was superb to keep the Islanders’ offense equally puzzled.
Schneider did all he could to keep the game in check, but the T-Birds broke down the levee walls in the second period with a four-minute stretch that rivaled the most prolific in-game charges in team history. Josh Wesley fired the first blow with a bar-down wrist shot over Schneider’s glove hand at 6:04 to make it a 1-0 game off a slick cross-ice feed from Logan Brown.
Two minutes, seven seconds later, at 4-on-4, Nathan Walker and Brown continued their feast against the Islanders as Walker set up Brown from the side of the net, and Brown pushed a backhander home as he was cruising through the blue paint to make it 2-0. Walker and Brown’s points on that tally put each of them at nine points against the Islanders on the young season. 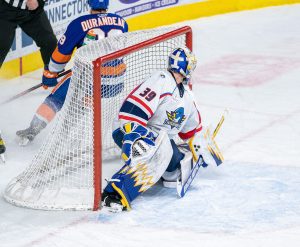 Only 29 more seconds passed before Hugh McGing rocketed a one-time slapper over Schneider’s glove on a pass from Matthew Peca. McGing’s blast from the left circle at 8:40 made it a 3-0 lead on Springfield’s second 4-on-4 goal of the game.
The T-Birds still were not content with a three-goal cushion, as Mackenzie MacEachern pounced on a rebound from an Alexey Toropchenko redirection and potted his second of the season at 9:57, ending a run of three goals in just 3:53 of game action to turn a scoreless game into a 4-0 romp.
Lindgren carried his shutout into the game’s final two minutes before Austin Czarnik finally cashed in for Bridgeport on a power play with just 1:34 left on the clock. Springfield finished the 4-1 victory having outshot the Islanders 48-19. Schneider battled to make 44 saves in the loss. Lindgren’s win was his fourth straight overall, and he has allowed just four goals on his last 96 shots faced.
The Thunderbirds entered the weekend seeking to tie the team record with a sixth straight victory. – Courtesy of Springfield Thunderbirds