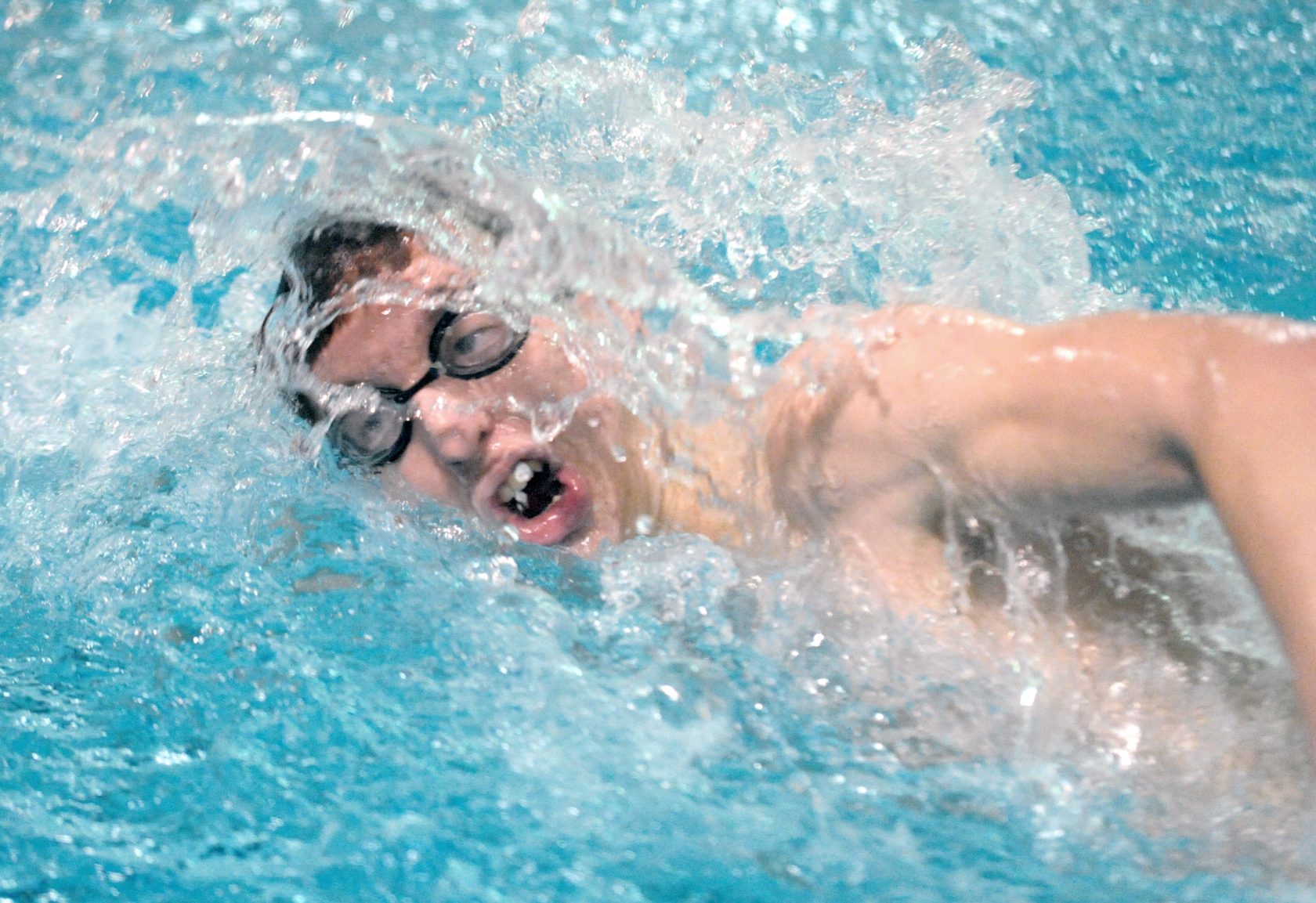 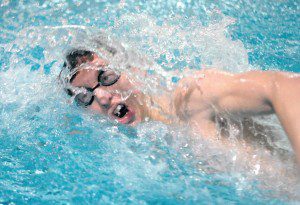 WESTFIELD – “Senior nights are supposed to be nights to remember,” Westfield Bombers head swim coach Tom Lewis said after an epic win over Minnechaug on Tuesday night secured a perfect regular season for the entire program, a combined 20-0. “They are full of smiles, hugs, and memories of what it has meant to be part of your high school team. (It) will be a night that few will ever forget.”
“The girls’ swim team easily beat Minnechaug (130-56) to cap their fourth straight undefeated season. Yet, as incredible as that was, it was the boys’ team that brought the very loud cheering fans to their feet with an incredible last-event, upset victory over a Minnechaug team that had not lost a dual meet in over six years.”
The Westfield boys’ squad edged the Falcons, 94-92, ensuring the entire program of an unbeaten sweep of the Minutemen League titles.
The boys’ meet began with a big victory in the 200 medley relay as Matt Jacobson, Jimmy Stinehart, Tim Kwarcinski, and Christopher Tu finished a mere two-tenths of a second ahead of Minnechaug with a time of 1:46.48 to claim first.
The next three events went fairly much as planned, Lewis said, with Matt LaBombard (200 freestyle), Tim Kwarcinski (200 individual medley), and Jimmy Stinehart (50 freestyle) taking care of business.
But despite having won every event to start the meet, the Westfield boys found themselves tied going into the diving competition.
James Wagner and Igor Belokopytov dove well, but were outmatched by Minnechaug’s divers, and the Bombers trailed by four points when the swim events resumed.
LaBombard (100 fly), John Dolan (100 free), and Kwarcinski (500 free) finished first in the next three events for Westfield. But even with great back-up swims and personal best times from Christopher Tu in the 100 free and Roberto Morales in the 500 free (a personal best by 7 seconds), the Bombers found themselves trailing by eight points because of Minnechaug’s depth.
The meet may have appeared to some to be slipping away. Still, four events remained.
The meet’s defining moment may arguably have taken place during the 200 free relay. Westfield’s “A” team of Jimmy Stinehart, Matt LaBombard, Pat Monette and John Dolan won easily with a time of 1:36.82. However, it was the Bombers’ “B” relay that brought the fans to their feet with an incredible second-place finish.
Slav Ptashuk, Matt Jacobson, Christopher Tu and Austin Kearney combined to stun the Minnechaug relay team and reclaim a two-point lead for Westfield.
Dolan then swam to an impressive win in the 100 backstroke with teammate Matt Jacobson taking third to put the Bombers up by four points with two events remaining. The 100 breastroke was won by Minnechaug’s Tommy Normoyle, the pre-season pick to win the WMASS championship. Stinehart finished a very close second, and when Pat Monette held on to a very important fourth-place finish, the meet was tied at 86-all with just the final relay remaining.
“Win the relay, win the meet,” was the slogan.
The 400 freestyle relay began with LaBombard giving Westfield a very slim lead. Tu went second for Westfield and even though he swam a personal best time, Minnechaug took a 2-and-a-half-second lead going into the third leg. Kwarcinski swam Westfield’s third leg and when he turned at the 50 wall and had virtually eliminated the deficit, the fans were back on their feet and louder than ever. Kwarcinski finished his leg in an astounding fashion with a split of 50.71 seconds and gave Dolan a very slim body-length margin to hold on to.
With the overflow crowd on its feet, Dolan seemed to increase his lead over the first 50. When he came off his last turn and victory was within sight Bombers’ fans were whipped into a joyous frenzy not seen in quite some time at Westfield High School.
Final margin of victory in the relay – 1.3 seconds. Final margin of victory in the meet – 2 points. It was the Westfield boys’ first undefeated season and league championship since 2004.
GIRLS’ MEET: “The Westfield High School girls were looking forward to a meet that was supposed to have some close swims and a fairly close score as a last good preparation to defend their WMASS title next week,” coach Lewis said. “The close meet never materialized.”
Westfield completely overwhelmed the Falcons.
Kate McCabe, Erin Lewis, Genna Senecal, and Jordan Jacobson got the meet started with a very impressive win the opening relay (1:55.27).
The meet was clearly in control for Westfield when the trio of Lauren Longley, Hannah Plourde and Shaylyn Jurczyk took 1-2-3 in the 200 freestyle. In one of the few good races of the day, Lewis took on Minnechaug’s best swimmer, Christiana Greco, in the 200 individual medley, and won with a personal best time of 2:16.66.
Jordan Jacobson led a 1-2 finish in the 50 free; Kelsey Veillette finished her stellar diving career with an impressive score of 214.05 points; Senecal easily won the 100 fly; Hope Walsh, Lauren Longley and Sarah Plourde led another 1-2-3 sweep in the 100 freestyle; and Jacobson led yet another sweep – in the 500 free.
The 200 freestyle relay team of Lauren Longley, Erin Lewis, Hope Walsh and Jacobson beat back a strong Minechaug relay with a time of 1:44.34. McCabe, a freshman, won the 100 backstroke. The 100 breastroke – a real crowd pleaser competition on this particular day featured Erin Lewis and Lauren Quinn, who are currently ranked third and fourth in Western Massachusetts, respectively. Lewis took an early lead and finished first with an impressive time of 1:10.66.
The meet came to a rather anticlimactic finish with the WHS relay team of Longley, Senecal, Hannah Plourde and Walsh finishing with a time of 3:51.26, the second best time in Western Mass. to date.
“The victory was a great win and now prepares the Bombers to try and defend their championship title next week at Springfield College,” Lewis said.
The Division I west sectionals will be held Sat., Feb. 9 at Springfield College. The boys’ competition begins at 9:30 a.m., followed by the girls at 3:30 p.m.