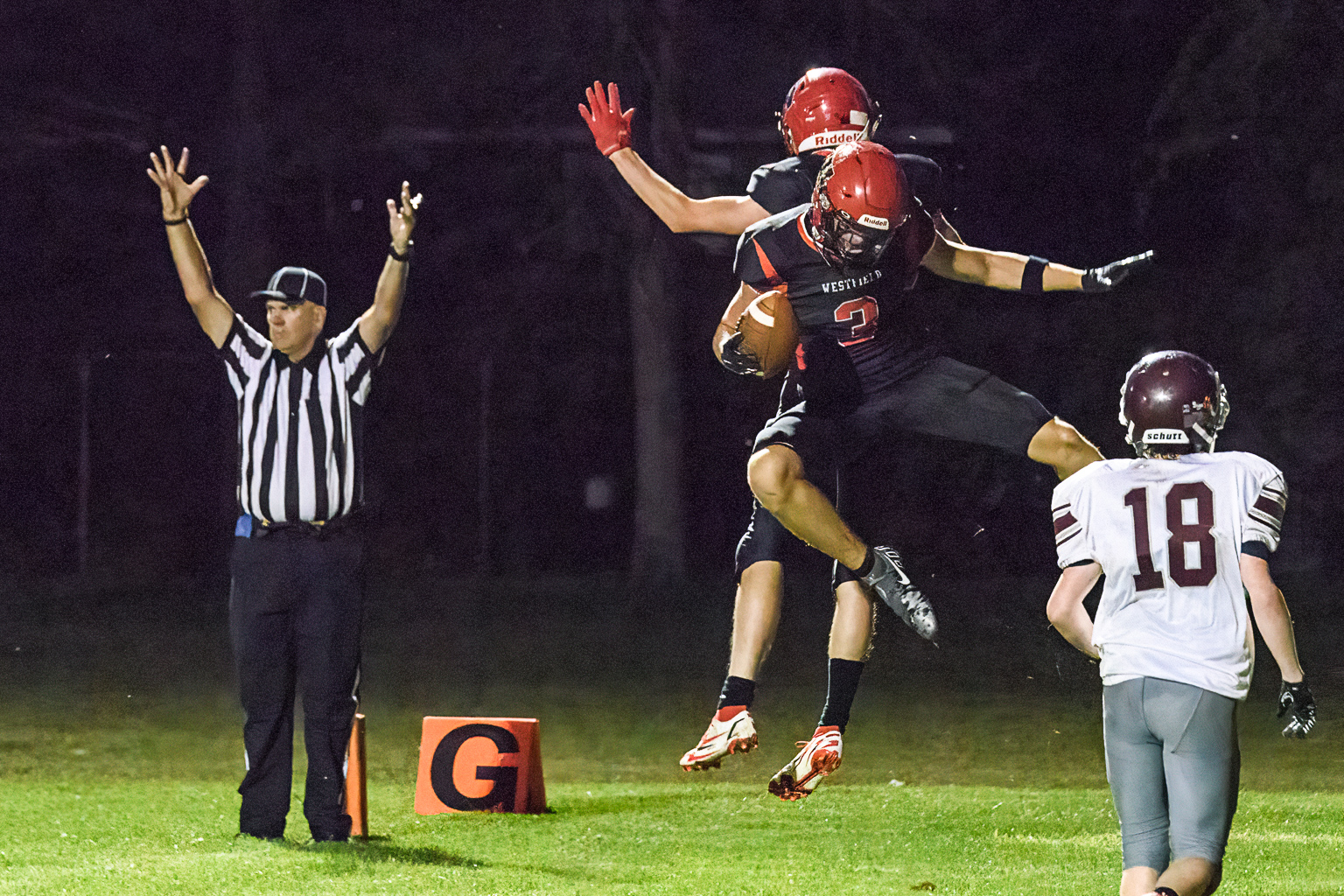 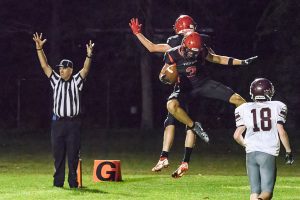 WESTFIELD – The Westfield High School football team welcomed back Friday night football with a very special show of force.
Westfield attacked by air – – senior quarterback Matt Adamites threw three touchdowns, two to senior wide receiver Andrew Scott and one to senior wideout Michael Collins – – by land – – senior running back Ryan Cimini rushed for two long touchdowns and totaled nearly 200 yards on the ground – – and by sea – – as the Hurricanes were swept up in a defensive tidal wave at Bullens Field. The Bombers overwhelmed Amherst 44-0.
“We did the right things; we moved the ball when we wanted to,” Westfield High School football coach Rob Parent said. “The outcome is the way we wanted it.”
Area police and military members were honored during a special 9/11 tribute prior to the kickoff. After the national anthem, Westfield quickly established the lead and never looked back.
Cimini took the game’s opening handoff and rumbled 68 yards up the right sideline for a touchdown.
“I just felt great,” Cimini said. “The corner dipped inside. I saw the outside. I just took it and ran all the way to the end zone.”
Westfield stalled out on its next possession and their next two drives appeared headed for the end zone before ending in turnovers. Still, the Bombers defense remained suffocating, swallowing up nearly every run and deflecting just about every pass.
Then, midway through the second quarter, after forcing a turnover, Westfield took advantage of a short field scoring on a first-and-10 from the Amherst 20 when Adamites hit Scott in the corner of the endzone for a 20-yard touchdown. The Bombers led 12-0.
“Matt threw a really good ball,” Scott said. “He gave me a chance to make the play and I made the play. …We got going with that.”
Westfield took off from there.
After forcing a three-and-out late in the first half, Westfield put together a short drive. The series of plays culminated in an 18-yard touchdown reception from Collins. Collins plucked the ball from Adamites out of the air in traffic in the back of the end zone, and when his feet came down the Bombers led 18-0.
Amherst attempted to run out the clock late in the first half but the Hurricanes ran into a brick wall in the form of the Westfield defense. The Bombers forced another punt.
On their next play from scrimmage, Adamites hit a wide-open Scott who easily took the ball 40 yards down the right side of the field untouched for another touchdown. The Bombers led 24-0.
If there was any doubt whether or not Westfield would maintain momentum throughout the second half, the Bombers quickly put that question to rest.
Westfield’s defense swarmed the ball early, forcing an Agawam punt to begin the third quarter. On the Bombers’ first play from scrimmage, Cimini took the handoff, turned the corner on the left side of the field and raced 43 yards for the score with 7:29 on the clock. The home team led 30-0.
“Our mindset was just to put them away,” Cimini said.
Westfield freshman running back Lucas Guay came off the bench late in the third quarter and immediately ripped off a 30-yard run with quickness and some fancy footwork. Four plays later, he scooted into the end zone for a 13-yard touchdown. The Bombers advantage ballooned to 36-0.
Senior Josiah Alvalle scored a short TD run in the waning moments for Westfield. Bombers freshman Jaxson St. Pierre converted a two-point conversion.
NOTES: Unofficial stats show that the Amherst Hurricanes finished with zero total yards of offense. …Westfield will begin a road trip next Friday night at Northampton at 7. The Bombers then travel to Pittsfield to face the Generals Sept. 24 before returning home to take on the Holyoke Purple Knights Oct. 1.