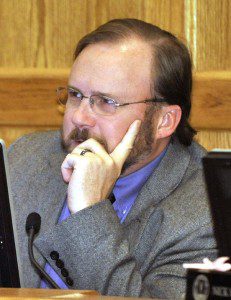 WESTFIELD – The City Council abruptly adjourned last night, leaving 80 percent of its agenda still on the table and freezing the clock in naming a new Ward 2 councilor, following the resignation of James E. Brown Jr., who represented that ward for the last three years.
Ward 5 Councilor Richard E. Onofrey Jr. made the motion to adjourn at the end of the Communications from the Mayor segment of the council meeting and prior to the Reports of City Officers, during which City Clerk Karen Fanion would have submitted Brown’s letter of resignation, starting the clock on which the council would have to approve a replacement. The council must act to replace Brown within 15 days of accepting his letter of resignation.
Brown was reelected without an opposing candidate on the ballot in the last municipal election held in November of 2011. If Brown had been opposed in his reelection bid, the losing candidate would be appointed by the council to fill the remaining term in office.
The Law Department has issued an opinion that while there was no opposing candidate’s name on the ballot, there was opposition in the form of write-in votes. While there was no formal candidate opposing Brown on the ballot, a Cross Street couple, opposed to the new Ashley Street School and Brown’s support of that project, wrote in each other’s names. The wife, Erin M. Winters of 34 Cross St., has expressed no interest in accepting the position, but here husband, Brian S. Winters, has expressed interest in the post and attended the City Council meeting last night.
The Winters are also party to a Hampden Superior Court suit charging that the city violated the provisions of Massachusetts General Law, Article 97, when part of the Cross Street playground was taken for the school project. There is a hearing slated for that suit Wednesday, Sept. 12 and a temporary injunction issued last week to halt further site preparation work.
Onofrey said that he made the motion to abruptly adjourn because he, and other council members, want more information before accepting the resignation and beginning the replacement process.
“It keeps the clock ticking,” Onofrey said following adjournment. “I, and other councilors, are not ready to accept Brown’s resignation because there are too many unanswered questions. I’ve requested, from the Law Department and the state, a definition of a candidate.”
“In my opinion, a write-in vote does not make you a candidate and is different from a write-in candidate who campaigns,” Onofrey said. “Scratching your own name does not constitute a nomination, which requires 50 valid signatures to get your name on the ballot.
Ward 4 Councilor Mary O’Connell blasted Onofrey for his “possibly illegal” motion.
“The people of Ward 2 are being denied representation on the council,” O’Connell said, “because the councilor cannot accept that a person is legally ready to represent them. Residents of Ward 2 can thank the Ward 5 councilor for that blockage of representation.”
O’Connell said that she recently spent time talking with Winters, and said he will withdraw his name from the suit if appointed to the council. O’Connell said that she is impressed with Winter’s dedication and desire to serve residents of that ward.
O’Connell never had time to voice her opposition to Onofrey’s motion which was immediately given a second. No discussion is allowed after the motion is given a second. Council President Christopher Keefe called the vote and there were no “nays”.
“I got a majority of votes to adjourn,” Onofrey said.
Alvin See,a member of the Zoning Board of Appeals, which is also being sued by the school opponents, spoke during public participation at the beginning of the council meeting, urging ward councilors to have an opponent on the ballot.
“Find someone you’re comfortable with to run against you, to be your successor if you need to resign for some reason,” See said. “That establishes a line of succession and gets more people involved in city government.”