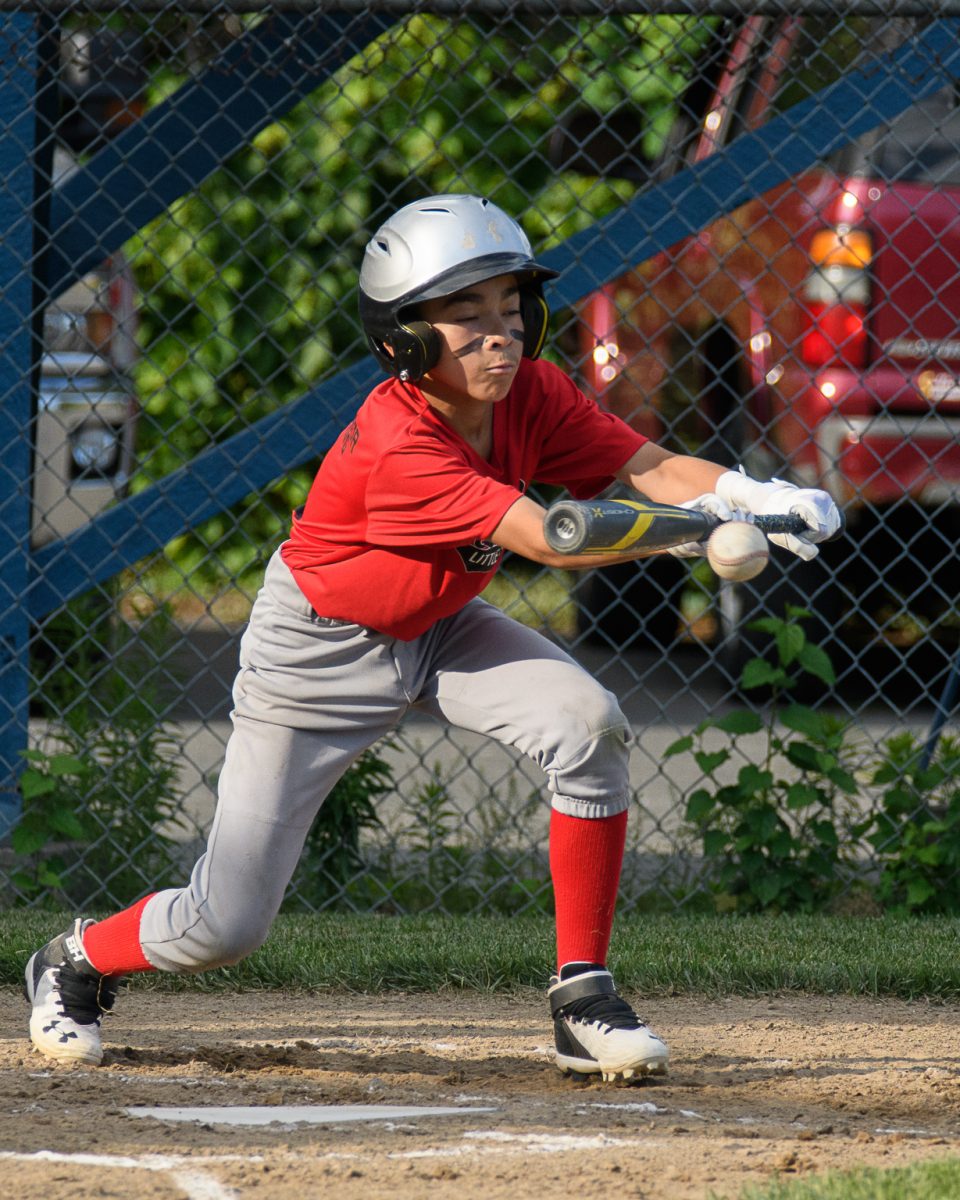 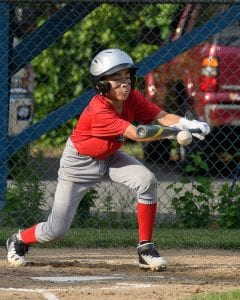 Air Compressor’s Jadiel Adorno lays down a bunt that gets him a double and eventually the game’s only run in his team’s 1-0 win over Commercial Distributing in a Westfield Little League Baseball game Wednesday night at Ralph E. Sanville Memorial Field on Cross Street. (MARC ST.ONGE / THE WESTFIELD NEWS)

WESTFIELD – Sports may be shut down in pockets of cities and towns all throughout the country due to coronavirus concerns, but one local baseball team – – make that two, in fact – – did their absolute best to stay safe and deliver a quality effort on the field in their latest effort.
Air Compressor blew away COVID-19 with disinfectant, masks, and strict social distancing measures and still found a way to push aside Commercial Distributing in a 1-0 Westfield Little League Baseball thriller Wednesday night at Ralph E. Sanville Memorial Field on Cross Street.
No. 11 batter Jadiel Adorno scored the game’s only run in the top of the third inning, using his blazing fast speed to cross home plate on a wild pitch. Adorno reached second base with a well-placed, two-out bunt. The ball traveled nearly halfway down the third base line, coming to a stop just inches short of foul territory. Adorno’s heads-up base running resulted in a bunt double. He advanced to third base on a passed ball, and scored on a wild pitch.
Adorno said he was just following the coach’s instructions for a bunt, but then saw nobody covering second base “so I just ran over there.” As for the scoring play, “I thought I had the speed to get there,” he said.
Air Compressor also sped up its delivery on the mound with Brandon Mielke, Donovan Cummings, and Jack Madsen pitching a combined one-hitter. Each pitcher tossed two innings.
Commercial logged its only hit in its first at-bat when Audrey Amaral smacked a line drive up the middle for a one-bagger. Mielke bounced back by retiring the side with three straight strikeouts; he continued his dominance, striking out all three batters in the second inning before exiting the game. 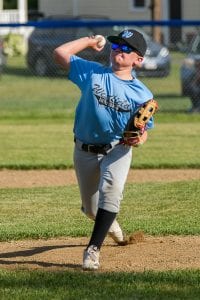 Cummings took the mound in the third. He struck out all three batters in the inning and another to begin the fourth. A ground out and a fly out sandwiched around an infield error completed his outing.
Madsen shut down Commercial over the final two innings. He flirted with a bit of trouble in the fifth inning when Nolan Wondolowski walked and Logan Csekovsky reached on an error. Two straight strikeouts and a ground out ended the threat.
In the sixth, a couple of fielding miscues allowed Liam Condon to reach third base without any outs.
Madsen responded by striking out the next batter. Condon attempted to score on a wild pitch but the catcher quickly tracked down the ball near the backstop, fired to Madsen at home plate. Madsen tagged out the base runner just inches away from safely touching the plate.
“We’re just chucking it, having fun,” said Madsen, who noted the hard work of the pitching staff during practice sessions.
Commercial Distributing’s pitching staff also put on a solid display. Other than Adorno’s bunt double, Wondolowski allowed just one other hit – a Madsen first-inning double to deep center field. He finished with three Ks.
Noah Amaral also pitched well, allowing not a single hit over the final three innings. He struck out five batters.
Amaral said he attributed his success to the location of his pitches, and also expressed his enthusiasm for his team’s long-delayed return to the field after COVID-19 led to a three-month shutdown. “It feels awesome because we need to do things during quarantine,” he said.