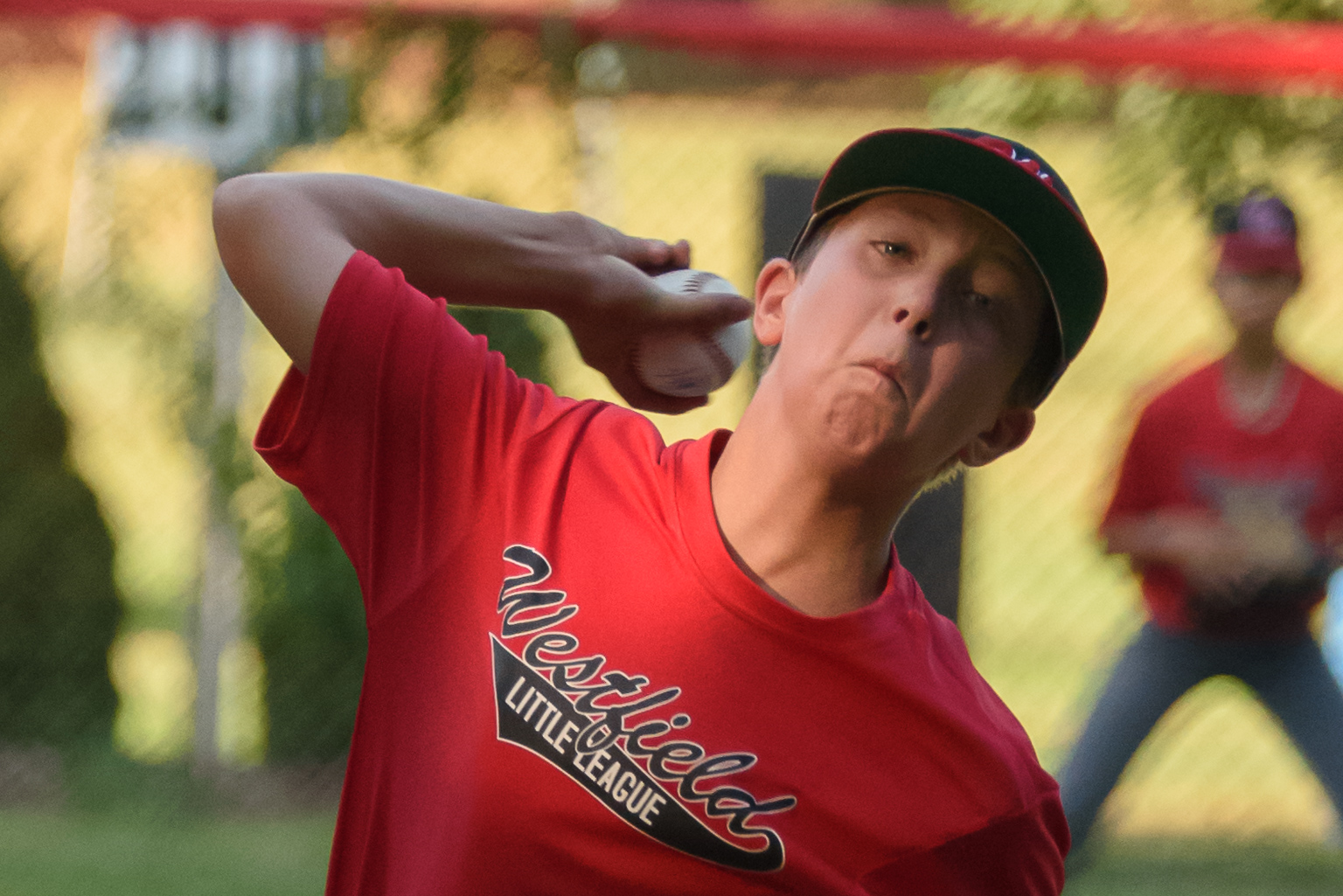 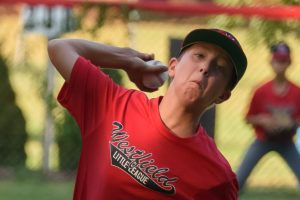 WESTFIELD – Snap, crackle, pop!
With the snap of a wrist and the crack of a bat, Slovak Club slugger Brian Penland changed the outcome of Wednesday’s Westfield Little League Baseball showdown against league heavyweight Air Compressor.
Penland launched a towering two-run home run in the sixth inning as Slovak Club completed a thrilling 2-1 come-from-behind victory over Air Compressor Wednesday night at Paper Mill Field.
“I was just trying not to think to lose, try to think to win,” said Penland, who belted a sixth-inning fastball over the left field fence for the eventual game-winner. “I was very lucky, and grateful.”
Offense was a struggle for both teams with superb pitching from both squads on display.
Air Compressor starting pitcher Jack Madsen shut out Slovak Club for five solid innings before his coaches turned to the bullpen.
Madsen retired the first three batters he faced, and after walking a batter to begin the second, struck out the next three batters.
Slovak starting pitcher Jack Stathatos was also effective on the mound.
Air Compressor’s Anthony Sanchez singled with one out in the bottom of the first, but a double play ended the inning. In the home half of the second, Air Compressor’s Donovan Cummings was hit by a pitch and – – with a little small ball – – was bunted over by Luke Cummings with a perfect sacrifice. Stathatos struck out the next batter to end the inning though.
Madsen continued his brilliance on the mound in the third, striking out three of the four batters he faced, the lone hit being a Jacob Barnes single.
Air Compressor manufactured a run in the bottom of the third. Brandon Mielke smacked a hard single down the third base line, and advanced to second base on a wild pitch. John Sardinha put the ball in play in the left side of the infield. With some heads-up baserunning, Mielke waited for the ball to be thrown to first base and successfully made it to third. He scored on a dropped third strike as Matt Bedore made it to first base in time.
Slovak Club applied some pressure in the fourth with back-to-back two-out singles from Penland and Anthony Roberts. Madsen escaped the inning unscathed though, striking out the final batter of the inning.
Slovak Club reliever Michael Sanchez kept the game close, retiring the side 1-2-3 in the bottom of the fourth, two batters via the K.
Slovak Club threatened again in the top of the fifth, beginning with a two-out bunt single from Barnes. Barnes advanced on a wild pitch. Andrew Galczynski walked. Both runners advanced on a wild pitch. With runners in scoring position, Madsen retired the No. 3 batter with a key strikeout.
The tide turned in the sixth.
Stathatos reached on a towering double to right center field. Then Penland stepped to the plate and smashed what turned out to be the game-winning hit, a round tripper for a 2-1 win.
Sanchez allowed just one hit in the bottom of the sixth, a single from Brodie Grabiec. John Sardinha was hit by a pitch before Sanchez struck out the next batter and forced a ground out to end the game.
It was only the second loss of the season for Air Compressor. Both losses came against Slovak Club.