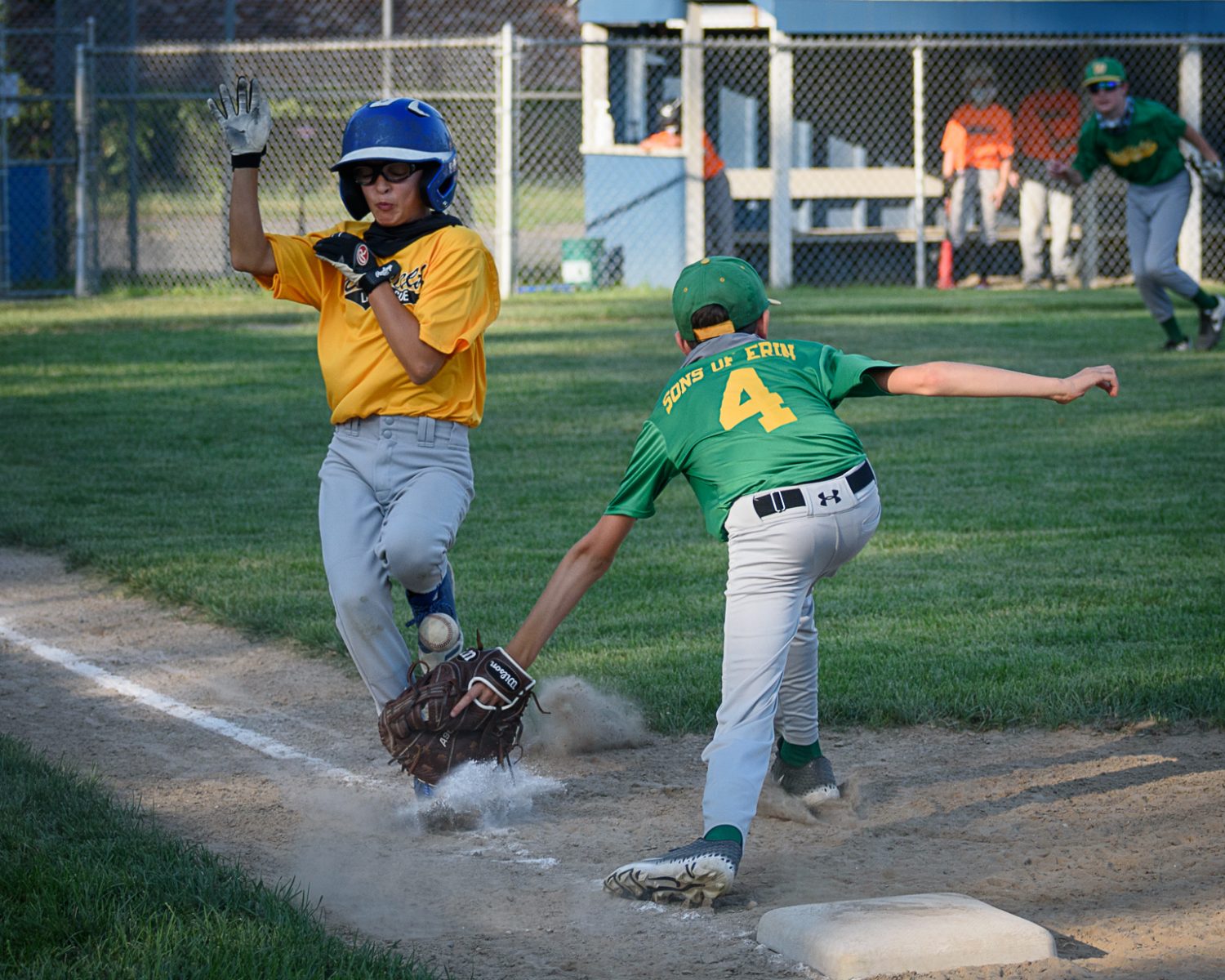 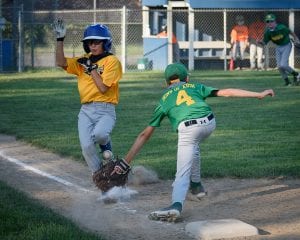 Jacob Barnes makes it to first base for Kiwanis Club as the ball just scoots past Sons of Erin’s Evan Miller (4) at first base in a Westfield Little League Baseball game Tuesday night at Ralph E. Sanville Memorial Field. (MARC ST.ONGE/THE WESTFIELD NEWS)

WESTFIELD – While the number of games remaining in the Westfield Little League Baseball season continue to wane, there is no shortage of thrills and chills.
On Tuesday, Kiwanis and Sons of Erin waged a battle of epic proportions before Kiwanis slipped past Sons 7-6 at Ralph E. Sanville Memorial Field.
Both teams came out with a purpose.
Kiwanis immediately loaded the bases in the top of the first inning with a bunt single from Josiah Pouliot, an infield single from Austin Kenyon, and a walk from Carsen Michelucci. Owen McIsaac drove in the game’s first run with line drive single that zipped through the right side. With two outs, Pouliot laced a line drive single through the left side, scoring two runs. A run-scoring single from Michelucci to left field made it 4-0.
Sons of Erin delivered a loud response.
Lead-off batter Peter Szenda was hit by a pitch. Ben Daley reached on an error. No. 3 hitter Keith Drzyzga drove in both runners with a booming triple to right field. Drzyzga then scored on a Jack McGrievey sac-fly RBI.
Despite both offenses attacking the ball with regularity in the early going, both starting pitchers soon settled in.
While two batters reached base in the second, both courtesy of infield errors, Sons of Erin pitcher Tyler Neal allowed no hits and struck out one batter. Kiwanis pitcher, Michelucci struck out three of the four batters he faced.
In the third, Neal retired the side 1-2-3 with the first two batters going down on Ks.
In the bottom half of the inning, mistakes fueled Sons of Erin’s comeback. Kiwanis committed consecutive infield errors, the second of which resulted in a game-tying run. Sons took a 5-4 lead on a two-out McGrievey single to center field.
Kiwanis squeaked out a tying run in the top of the fourth off Sons of Erin reliever Ben Daley before Daley settled into a groove. Pouliot drew a lead-off walk, advanced on consecutive wild pitches, and scored on a fielder’s choice when Kenyon put the ball in play. Daley struck out the next two batters to end the threat though.
Kiwanis pitcher Sean Aponte followed up Daley’s mound appearance with a dandy of his own. Aponte retired three batters on just four pitches, forcing three straight ground outs in the city’s most efficient half-inning outing of the year.
Jacob Barnes, who was called up from Slovak Club to help offset a shorthanded Kiwanis squad, quickly manufactured the go-ahead run. Barnes reached on a hit-by-pitch, stole second base, and then advanced two bases on a wild pitch with acute base awareness. With runners at the corners, Sons of Erin reliever Angel Villanueva came on to record a K to end the top of the fifth.
The efficiency meter stayed at an all-time high for Aponte. Aponte retired the side 1-2-3 in the top of the fifth, striking out the inning’s first batter before inducing a fly out and ground out to end the inning.
Kiwanis added an insurance run in the top of the sixth when Barnes singled, moved to second on a Pouliot base hit, stole third, and scored on a fielder’s choice. Kenyon was credited with a RBI.
Sons of Erin gave its all as the game waned.
Jadiel Cruz walked to begin the last half of the sixth for Sons. Cruz advanced two bases on wild pitches and scored on Drzyzga’s two-out RBI single. With the score now 7-6, anticipation built … until a ground out finally ended the game.