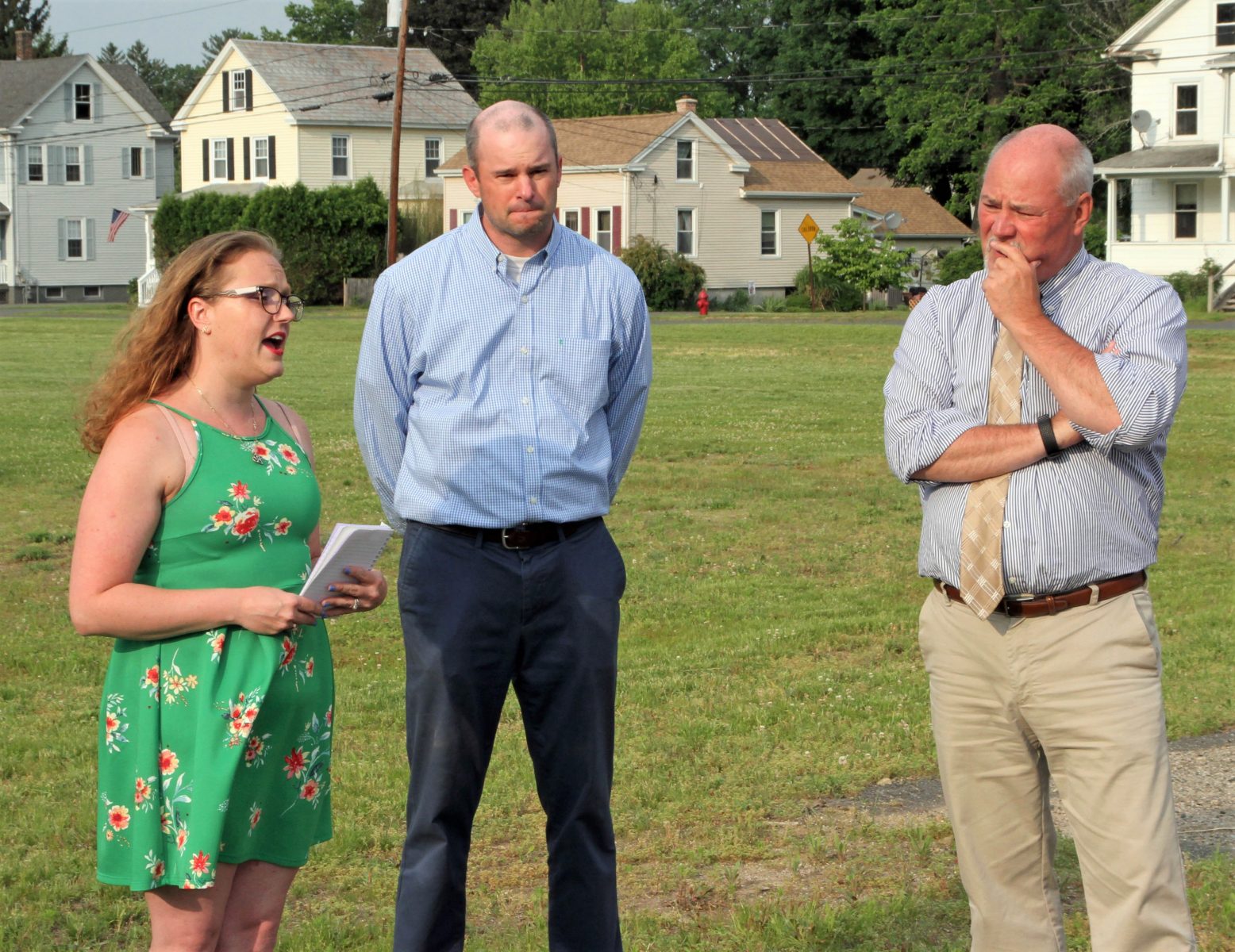 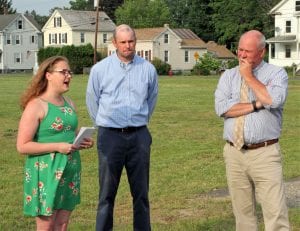 Mandi Riel Rodriguez speaks on some of the needs the new playground should include for consideration as Community Development Director Peter Miller and Mayor Brian Sullivan listen. (Don Wielgus Photo)

Miller received mixed reactions, with most residents in attendance in favor of the plans and others hoping to bring back more baseball.
The all-abilities playground was spearheaded by Mandi Riel Rodriguez. She has two children with special needs and wanted them — and all children — to be able to play safely with their peers. Her 5-year-old daughter has cerebral palsy and has a tough time navigating typical playscapes.
“The slides are high off the ground, stairs and ladders, too,” Rodriguez said.
She noted that the proposed playground would also be easier for adults with any sort of mobility to traverse with their children and grandchildren. She said it would allow for all-inclusive play and teach teamwork.
She said it’s a step in the right direction.
“We can’t change the world , but my husband told me we can start in our little corner,” said Rodriguez.
Miller said the city is applying for a $400,000 grant to help pay for the project. The entire cost is estimated at close to $900,000.

St. Peter and St. Casimir Parish Pastor, Fr. William H. Wallis, expresses his concern to Peter Miller about fencing that should be erected between the playground and the Church parking lot during a Cross Street neighborhood meeting on a proposed playground. (Don Wielgus Photo)

“We’re going to look at our local resources for the rest,” Miller said. “We will look into Community Preservation funds and we have $75,000 from the disabilities commission and we may look at private funding, which Mandi has offered to help with.”
Neighborhood resident Colleen Powers said she was happy to see the land being used for recreation.
“I love the idea of green space and a walkable space,” she said.
The playground is proposed for the southern part of the field on Parks and Recreation land. The adjacent blacktop area is owned by the school department and with an interdepartmental agreement, would remain parking.
Several residents asked about bringing back the second baseball diamond that was taken away several years ago when the land was almost the site of a new elementary school,
Neighbors rallied to legally stop the school from being built based on Article 97, which protects land for environmental and open space purposes, among others.
City Councilor Matt Emmershy asked whether the baseball field could return at Cross Street and the Chapman Playground rehabbed to become inclusive for all abilities.
“We couldn’t get a grant for that,” Miller said.
The city used a state grant to fund renovations at Chapman six years ago.
“To apply for a second grant would be a 20-year wait,” Miller said.
Miller said the 18,000 square-foot pad alone costs $280,000, with the actual playground equipment coming in at a similar price tag. 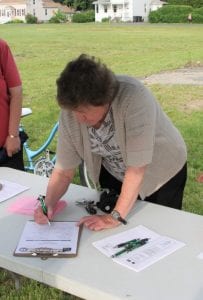 There would be other costs, including fencing, irrigation, improvements to the existing bathroom and paving.
Fr. William H. Wallis of St. Peter and St. Casimir Church was concerned about the church parking lot, located on the side of the proposed playground.
“Speaking as the largest principle abutter of this property, we need to talk,” Wallis said. “We would like to see fencing and a standing understanding as to what the official access to our parking lot is going to be.”
Wallis said he didn’t want access through the church lot.
Miller agreed and said it would be discussed.
Plans include an accessible meandering path connecting the playground and playing fields to the bathroom. Fencing along Cross Street will be one of the details the city will work on with a designer once the grant is approved. Miller said he believes the proposal is strong and said with the rail trail close by, dense neighborhood and a PVTA bus stop at the end of the street, the city has a good chance to receive the grant.

“I see this as a regional playground,” he said, noting that aside from the inclusive playground in Belchertown, this would be the largest playscape for children of all abilities in the area.
Miller said the application deadline is in July and he expects a decision late in the year. If approved, the city would go out to bid according to grant guidelines, which could be sometime in fiscal year 2021. Miller hoped construction would begin in the spring of 2021.