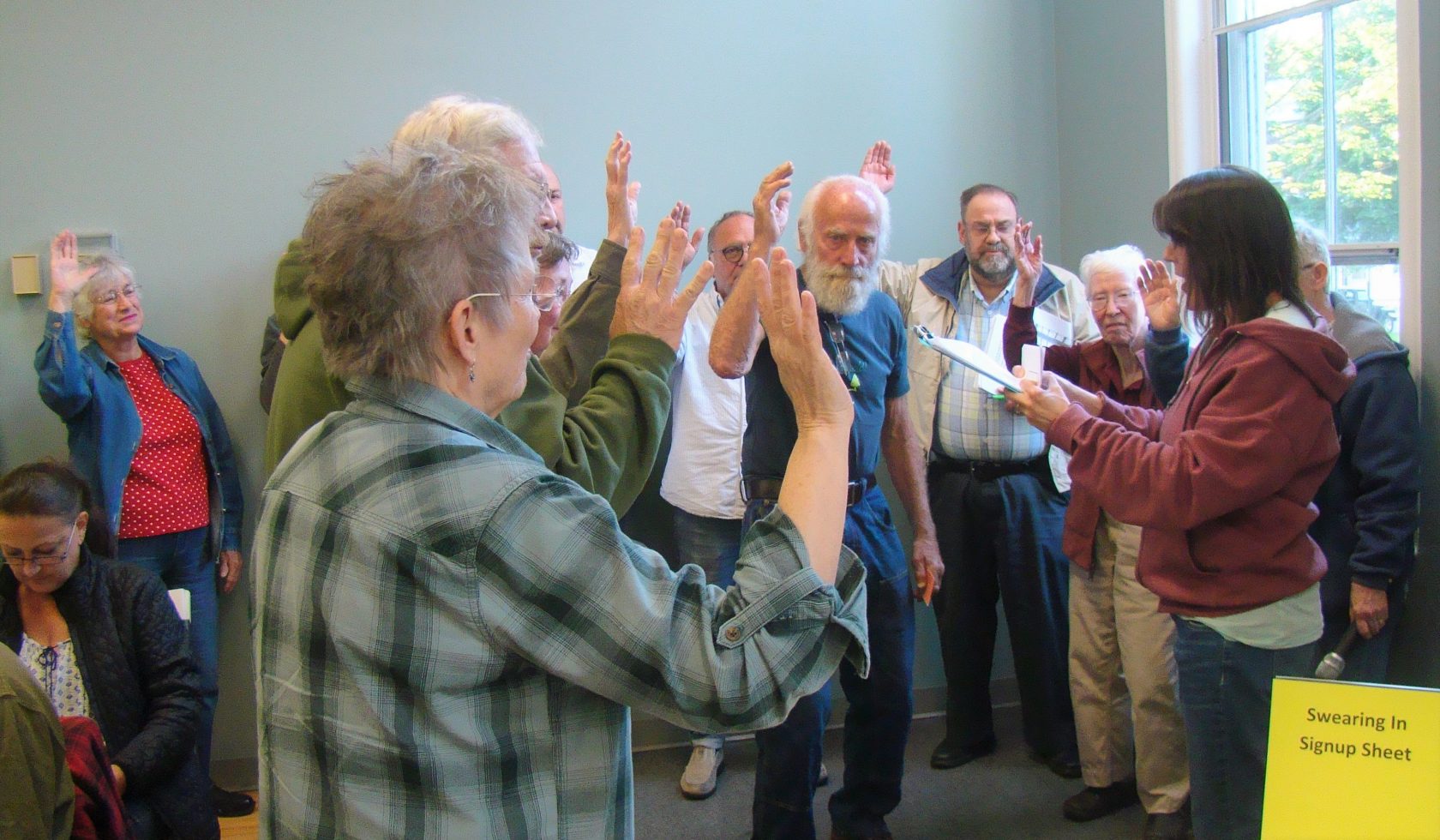 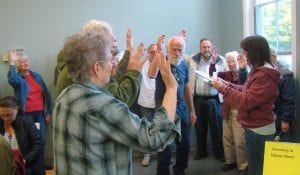 New and reappointed board members are sworn in by Huntington Town Clerk Kathy Thomas before the start of Huntington’s Annual Town Meeting. (Photo by Amy Porter)

HUNTINGTON – Even with a packed agenda requiring some explanation, the 78 residents in attendance passed every item at the Annual Town Meeting on Monday.
The meeting opened with a ceremony where the retired Memorial Day flag was presented to Vietnam Veteran Lou Purinton, who runs the transfer station in town. Purinton said it meant a lot to him. He served with the 544th Engineers in Vietnam, and one year in peacetime for the 2nd Infantry in Korea. He also served stateside duty as a heavy engine mechanic, he said.
The 2018 Annual Report was dedicated to Tom Gralinski, former firefighter, training officer, Zoning Board of Appeals chair and Town Moderator. Select Board chair Edward Renauld said Gralinski had encouraged and inspired many people from town to participate in local government, before presenting him with a birdhouse as a gift. 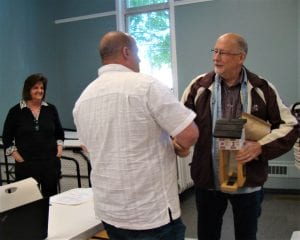 In welcoming residents to the town meeting, Renauld called it “a pretty cool process.” However, he said the town was missing a finance committee for a few years, which he called important for “checks and balances,” leaving the budget to the Board of Selectmen to prepare. He encouraged residents to volunteer for that committee.
The town budget of $1,965,377, not counting the school budget portion, passed the meeting unanimously with little discussion.
The warrant article on the school budget was amended on the floor by Selectman Darlene McVeigh, who also serves on the School Committee. McVeigh said because Montgomery residents voted down the alternative assessment, which holds each town to the same percentage increase as the district budget and requires all six towns to pass each year, the budget reverts to the statutory assessment, which is based on the March 1 student census for each town.
McVeigh’s amendment increased the school budget amount by $95,000 to $2,784,289, the statutory assessment for Huntington this year. The article passed with three opposed.
Residents also passed the newly revised Regional School Amendment, which eliminated Worthington as a member town and gave School Committee members weighted votes based on percentage of school population. Also passed were vocational school tuition of $510,000, and vocational school transportation of $84,670.
Five Free Cash transfers were also approved, including $100,000 to reduce the amount to be raised for taxation in fiscal year 2020. Renauld said the town did not have enough new commerce to offset increased taxes. 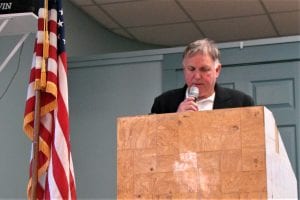 Also approved from free cash were $12,000 for the Other Post Employee Benefits (OPEB) Liability Trust Fund, and $75,000 for the Capital Equipment Stabilization Fund. Renauld explained that the town got behind on capital purchases, and the fund will help pay for the next one, which will probably be for a new pump truck for the Fire Department. The $75,000 will be added to $25,000 passed last year, leaving $100,000 in the capital equipment fund.
Also passed was $20,000 in free cash to be added to $20,000 from the Stanton Fund, to purchase a back-up generator for Town Hall and Stanton Hall.
The free cash transfer of $14,000 to the Economic Development Director Account, a position currently held by Jeanne LeClair created some discussion before passage, after resident Linda Hamlin asked LeClair to speak about what she has done for the town of Huntington.
LeClair said she is a shared employee of four of the six Gateway hilltowns, which were branded together last year in a new marketing campaign, and directed residents to the website at gatewayhilltowns.org. LeClair said she also spends a fair amount of town working with local businesses on their online presence and business plans.
LeClair said this year, the Gateway Regional School District will be paying a portion of her salary, as she covers some of the work of community relations director Wendy Long, who will be retiring in the fall. LeClair also noted that subsequently, the salary portion to Huntington has dropped from $19,000 last year to $14,000. At the meeting, LeClair received an endorsement from Council on Aging chair Kathleen Peterson, who said she has been very helpful to the COA.
Selectmen gave an impassioned plea for support of a transfer of $140,835 from the stabilization fund for the extension of cable services to the last remaining 17 homes unserved in the town. McVeigh said last year, Comcast built out to over 97% of the homes in town, paid for by a grant from the Massachusetts Broadband Institute. She said the amount in the warrant is all that Huntington will have to pay to become 100% connected.
Renauld said that Cable Advisory Board chair Chris Saner did a very thorough job for three years to ensure that all the homes were connected, and to get Comcast to commit to a quote of $140,835 for the buildout.
“If this is not voted, these 17 homes are out of luck,” Saner said.
The article passed, as did new bylaws for the Council on Aging, and authorization to allow the Select Board to enter into a contract in excess of three years with a new vendor for recycling processing services, once the current vendor in Springfield closes.