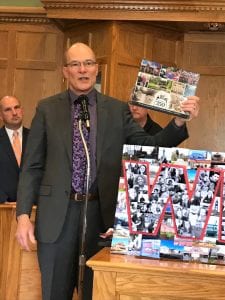 WESTFIELD- Channel 15 will be continuing the Westfield 350 celebrations with a marathon broadcast of all video relating to the city’s milestone birthday.

Harry Rock, president of the Friends of the Westfield 350 announced last week that there would be a rebroadcast of just about every major Westfield 350 event during the weekend.

On Nov. 28, 29 and 30 at 10 a.m. following the last community shows on WSKB, approximately 16 hours of 350 footage can be viewed on the local TV station. This will include the coverage of the city’s first-ever “First Night” on New Yea’s Eve all the way to the climactic parade celebrating the city’s birthday on May 19. Westfield’s Media Systems Specialist, Peter Cowles put together the schedule and was responsible for filming and editing many of the events of the Westfield 350.

The video will be played out of chronological order and it will be played in different orders on each day of the broadcast. For the most part, however, all of the lectures from the Westfield 350 Historical Lecture Series will be played one after another. It will include the most recent lecture on the Pure Foods Murder by McCabe.

“Much of what is available is already on the Westfield 350 website,” said Rock, “People can even go to youtube and look up Westfield 350 and see everything that we have filmed.”

In addition to the broadcast, Rock announced that the city will have its 2nd annual First Night on New Year’s Eve. He noted that it will likely be a scaled back version of last year’s event, but that there will be fireworks.