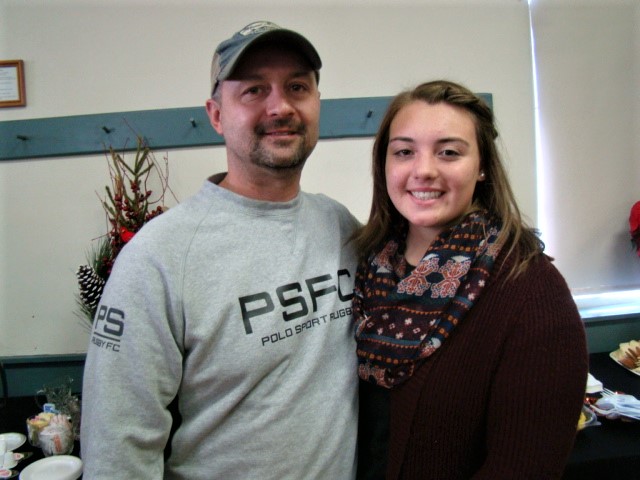 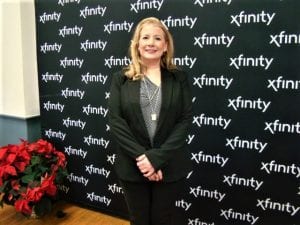 MONTGOMERY – Montgomery residents are giving thanks today for nearly 100% broadband connectivity, after a years-long effort that seemed hopeless at times.

On Nov. 26, leaders from the MassTech Collaborative, Massachusetts Broadband Institute, and Comcast joined residents to celebrate the official launch of the town’s broadband network, a project constructed by Comcast with support from the Commonwealth’s Last Mile grant program.

Julie Ruszala, chair of the Montgomery Broadband Committee, said she joined the committee to bring broadband to Montgomery three years ago, when the town was designated to receive a $550,000 grant from MBI. She said they still needed $1 million for the infrastructure, which did not exist in the town at all, where most residents had satellite or a digital subscriber line access.

Ruszala said the town was initially split on how to go forward, voting down joining the WiredWest collective as a municipal light plant three times, largely due to an elderly population on fixed incomes that were wary of raising the needed taxes to go forward. She said the Baker-Polito Administration got involved, negotiated with Comcast, and paid for the infrastructure through the Last Mile program.

She said the last street in town was just wired, and they are very close to 100%, with maybe one or two homes not yet reached. “It works great,” Ruszala said. She said her family used to have DSL, and two people couldn’t use the internet at the same time, making it hard on her as a graduate student, with two sons in high school. 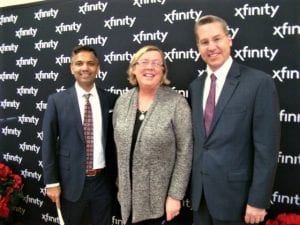 Dennis Mathew, regional senior vice president of Comcast for Western New England, said the company started from the ground up, in partnership with the MBI.

“We’re excited to be able to deliver internet to more homes,” Mathew said, adding, “It’s a great example of when a partnership goes well, ahead of schedule, and delivers great results.”

During the event at Montgomery Town Hall, Carolyn Kirk, Executive Director of the MassTech Collaborative, and Peter Larkin, chair of the MBI’s board of directors, who have been involved in the effort for four years, heard from town officials and local students who highlighted the changes the new connectivity will have on home-based learning, on small businesses, and in driving economic growth in the town.

Kirk thanked Gov. Charlie Baker and Lt. Governor Karyn Polito for prioritizing the delivery of broadband internet to residents of every city and town, and recognizing that access to a high-speed internet connection is critical for the success of families, businesses and communities. “We’re here to celebrate,” Kirk said. 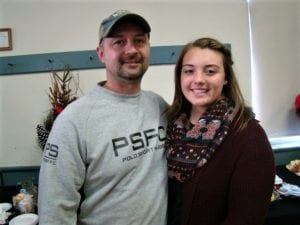 Montgomery resident Adam Bialas and his daughter Julie, a freshman at St. Mary’s, spoke about the impact of broadband. (Photo by Amy Porter)

Several students from Montgomery were at the celebration to talk about the impact of having broadband on their lives. Emma Bialas, a freshman at St. Mary’s High School in Westfield, said before having internet, she had to plan out everything that she would need to do at home online, and take into consideration the weather. “If the weather was bad, the internet was bad,” she said.

“It’s pretty cool getting to watch Netflix, because I couldn’t before,” said Gateway Regional High School eshman Jacob Tester. Gateway junior Daniel McKellick II said the most surprising thing for him was that people could watch two different shows on Netflix, upstairs and downstairs. Both students also said the internet is essential to their studies.

All three students are being given iPads by Comcast, to help them explore their new connectivity. 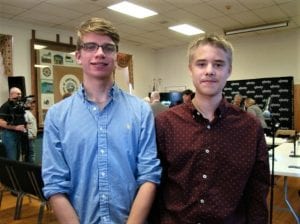 The launch makes Montgomery the 16th Last Mile town with a completed project, as 373 households in Montgomery now have access to high-speed internet through the new network. The project has delivered broadband connectivity to more than 99 percent of premises in the town, well above the Last Mile grant’s target of 96 percent, and Comcast is completing construction to the remaining homes and will reach 100 percent of premises in town.

“We thank the Commonwealth of Massachusetts and the Baker-Polito Administration for their commitment to expanding broadband coverage to our town, and appreciate Comcast’s dedication to connecting the homes and businesses across Montgomery,” said Michael Morrissey, chair of the Montgomery Select Board, adding that the infrastructure was critical for emergency responders in town. “This new connectivity will have a profound impact on our current residents and to attract new people to our town. For our town offices, they’ll be able to access new cloud based software and more easily submit project plans to state agencies. This is critical infrastructure for the future of our community.”

The MBI at MassTech Collaborative awarded Comcast a grant of up to $805,800 in June 2017 to design, build, own, and operate a broadband network in the Town of Montgomery. The grant was the first made under the MBI’s Private Sector Request for Proposals, which sought out companies willing to expand high-speed internet in an unserved town.

This will be the second Last Mile project completed by Comcast, following the completion of a nine town project for partially-served towns in September 2018. The company is also constructing networks to deliver broadband to the Town of Worthington and in the Town of Middlefield, projects also supported by the Last Mile program.

“We thank Comcast for partnering with the Commonwealth on this project and for delivering a 21st century network for the people of Montgomery,” stated Peter Larkin, MBI’s Board Chair and Special Advisor to the Secretary of Housing and Economic Development for the Last Mile project. “We’re excited to see the impact this enhanced connectivity will have on the future of Montgomery.”

Since 2016, the Last Mile program has invested nearly $35 million in direct awards to support broadband connections, including public/private projects and municipal-owned fiber-to-the-home networks. Of the 53 communities that were either completely or partially unserved at the beginning of 2016, only one remains, as 52 towns are now on a path to broadband connectivity. To date, 16 of these 53 towns have completed networks, delivering internet speeds at or above the FCC’s definition of broadband (25 megabits per second for downloads/3 megabits per second for uploads) to over 6,800 premises.

“The Last Mile program has seen great progress over the past few years, with more residents gaining broadband access,” stated Carolyn Kirk, Executive Director of the MassTech Collaborative, the parent organization of the MBI. “As we head into 2020, more municipalities are scheduled to come online, closing the digital divide for thousands of residents across western and central Massachusetts.”