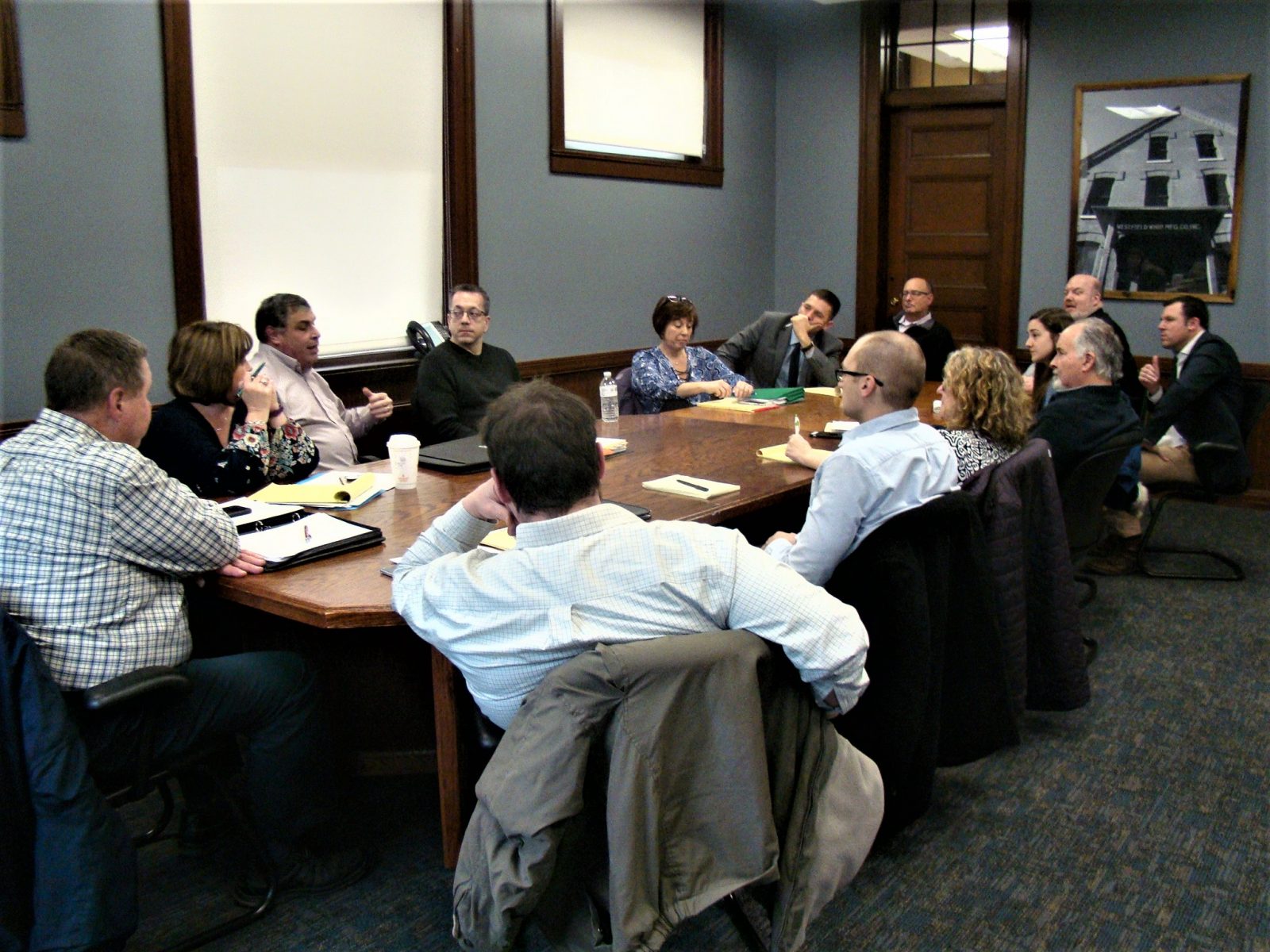 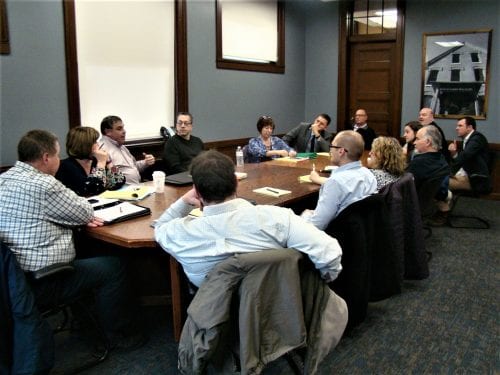 Area leaders meet in Westfield for a second time to discuss increases in recycling costs to cities and towns. (Photo by Amy Porter)

WESTFIELD – For the second time in two weeks, leaders from area cities and towns met at Westfield City Hall to discuss the rising costs of recycling to their communities.

Represented at the table were Springfield, West Springfield, Agawam, Chicopee, Holyoke, University of Massachusetts Amherst and Westfield.
Westfield Department of Public Works Director David Billips said that for Westfield and other communities that had gone to single stream recycling at the urging of the Department of Environmental Protection, they would either be signing a three-year contract at $150 a ton to get rid of the recycled materials, or be forced to find a cheaper alternative. The total increase to Westfield would be $500,000 to $600,000 per year.
For communities that retained dual-stream recycling, such as Holyoke, costs went from zero to $93 per ton.
Billips had said at the first meeting that the city has been paying nothing for recycling for years, and transporting recyclables to the Material Recycling Facility on Bondi’s Island in Springfield, which is owned by the DEP and leased to Waste Management, as had many of the towns
Westfield Purchasing Director Tammy Tefft said there is no “out” clause after one year in the new contract with Waste Management, and they are still unsure of the penalties for breaking the contract, if the city were to find a less expensive solution.
Billips said Westfield will be looking into getting permission for a temporary waiver to “tip” or dump recyclables at its transfer station, which would then offer the city more options for disposal at lower rates. Currently, they are hauling the materials directly to Bondi’s Island in Springfield, where it is then collected and transported off-site.
Billips said while they previously did tip at their station, the DEP had said the site had to be entirely enclosed. He said another option for Westfield may be to erect a building, which would take two years, but then would potentially allow other communities to bring their recycling to the city.
“The timing stinks,” said Mayor-elect Donald F. Humason, Jr.
State Rep. John C. Velis said that the increase was something, as a state delegation, that they weren’t tracking. He asked when local DPWs had been made aware of the increases.
Chris Cignoli of the Springfield DPW said that in August of 2018, Waste Management had attempted to impose a fee for single stream recycling. He said the DEP had asked their opinion, and they all said no.
Cignoli said there have been a handful of presentations, but DEP didn’t make it public until mid-fall.
Michael McManus of the Holyoke DPW said at the time, the DEP downplayed the impact.
Velis said he has reached out to Patrick Carnevale, director of the governor’s Western Massachusetts office, to set up a meeting with the DEP representative and area legislators.
“There should be a lot more people here at this meeting. There’s more people to this puzzle,” Velis said.
“We’re stronger together if we can band together,” Humason added.
State Rep. Aaron Vega of Holyoke said if the legislators go to the state for help, “we’re not going to get answers in a week.” Contracts are due to be signed by the end of January. He said it’s also going to be hard if everyone is using a different company.
“Pricing has forced us to look at different places,” said Tracy DeMaio, solid waste coordinator for the Agawam DPW.
“This is not just a contract crisis for Western Mass. communities,” McManus said adding that the overall crisis is national. “Now we’ve lost the incentive to recycle,” he added.
Cignoli said the DEP has already signed the contract with Waste Management for recycling, and that company was unlikely to change its position due to hardship on the communities.
Humason said it doesn’t seem fair that Waste Management makes a profit while cities and towns go into debt. The total of increased fees for the communities around the table was estimated to be between $5 and $6 million.
McManus said Waste Management would argue that they lost $6 to $7 million the last couple of years on disposal of recycled materials.
Cignoli said part of the problem is that raw materials are cheaper for companies to buy then recycled materials. He said waste companies have to pay to get rid of glass, and even with the five cent rebate from the state, they’re just breaking even. He said they make money on aluminum. He also said he doesn’t see the commodities market changing in the next two or three years.
DeMaio said there used to be a collective benefit to recycling, and now it will cost cities and towns.
Billips said it would be great if they could negotiate a one-year contract. McManus said it would look good for the DEP to come to the defense of the towns in that negotiation.
John Pepi of UMass suggested asking for $3 per capita from the bottle bill to defray the increases. At the last meeting, the group said there is $40 million in unspent funds from that account.
Velis said in the meeting with the DEP and area legislators, he will talk about why recycling is the right thing to do, and how the cost increases will cause communities to go back in time.
“Our conversation with the DEP (will be); do you really want this backward in time debate,” Velis said, adding they could have a meeting as early as this week.
“The last thing DEP wants to do is go back 30 years and justify recycling,” Pepi said.
“That, to me, is how you get DEP to engage,” Velis said.