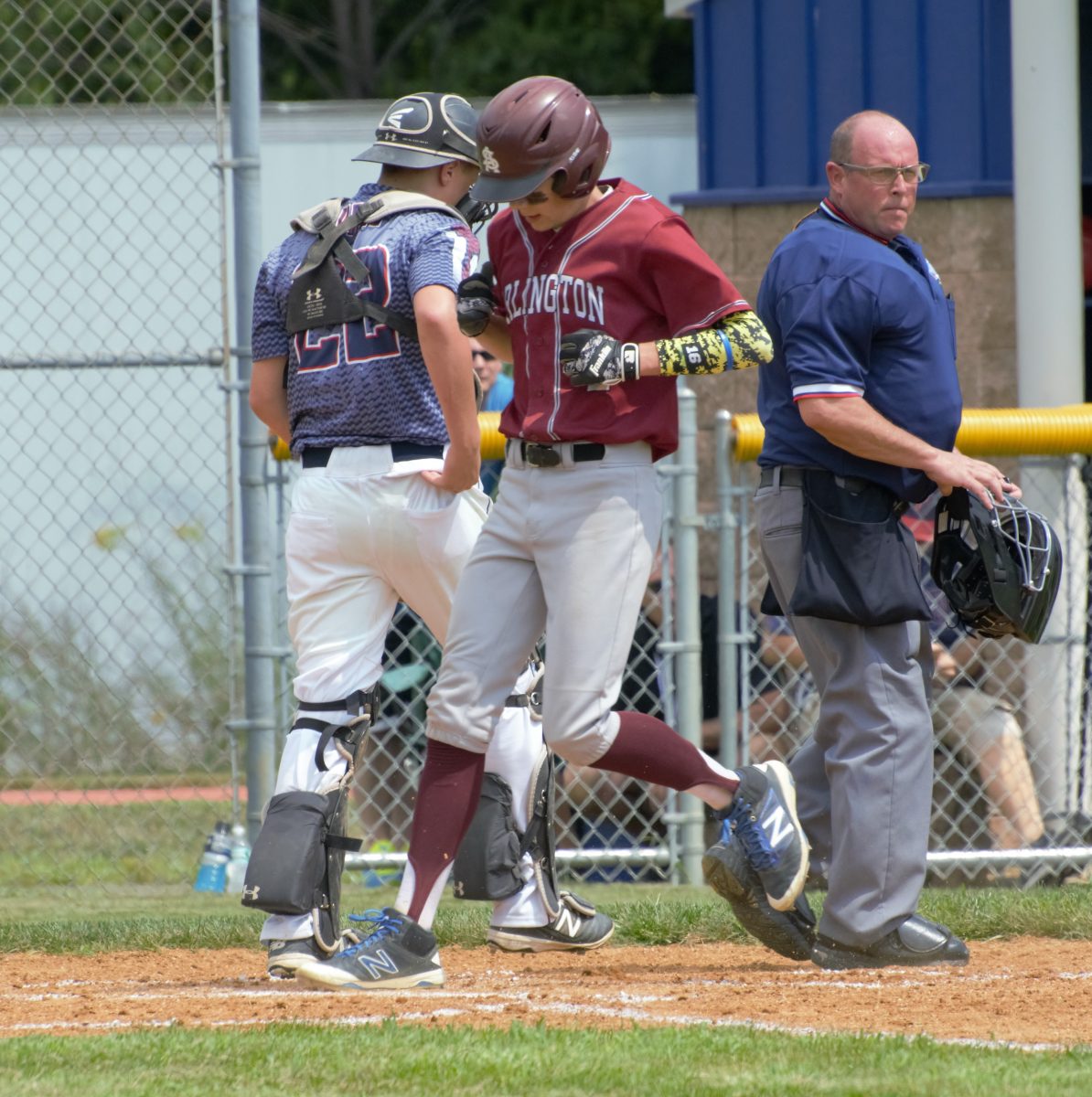 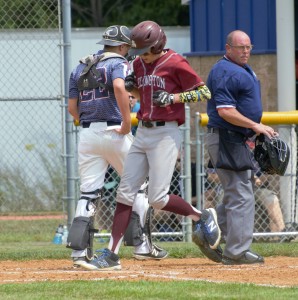 WESTFIELD — Eastern Massachusetts representatives from Arlington waited through rain, thunder and over an hour of delays to eventually beat the Western Massachusetts champions from Pittsfield, 6-3, in a Babe Ruth Baseball 14-Year-Old World Series opener Thursday night.
Arlington got a strong performance from starting pitcher Brendan Jones, who struck out five in four shutout innings and also added an RBI and a run scored on two hits in three at-bats. Arlington took the lead early and never looked back, scoring three runs in the first and never leading by less than three.
“It was good to get on the winning track against Pittsfield,” Arlington manager Tom Ahern said. “Our defense played very well and our team pitched great; Jones pitched very well. He’s been doing it all year.”
Pittsfield got two quick outs in the bottom of the first by third baseman Zach Zerbato and it looked like it was going to be a quick inning. But Arlington got Jones on first following a throw by Pittsfield second baseman Nick Taylor that pulled Jake Harrington off first that was scored a hit. This was followed by a double to right field by left fielder Tyler Callahan, moving runners to second and third.
Arlington third baseman Timmy Mazzei followed up the double with a single through the middle that scored two. Pittsfield pitcher Steinman then walked Arlington catcher Caden Fitzpatrick, then first baseman Tommy Kitzmiller ripped a single to right field to load the bases. Arlington second baseman hit a weak grounder that would have gotten Pittsfield out of the inning, but an error on the play by Pittsfield shortstop Christian Womble allowed a run to score and the hitter to reach, reloading the bases and making it 3-0. Steinman was able to induce a pop out to left by Arlington’s Timmy Shaw to end the inning.
Arlington continued its offensive onslaught by adding a run in each of the following two innings, making it 5-0 by the end of the third, which is where play was delayed due to rain and lightning in the area.
Following the hour-and-15-minute rain delay, Steinman of Pittsfield was removed after just 2.1 innings, giving up five runs (four earned) on six hits and four walks. Daniel DiMassimo came in and proceeded to give up another run in the fourth but was able to settle down after that, ending with 3.2 innings pitched, two hits, no walks, no strikeouts and one earned run.
Pittsfield made a push in the fifth inning though, after Jones was pulled from the game. With Kitzmiller on the mound for Arlington, Pittsfield was able to draw three consecutive hits-by-pitch before Kitzmiller got DiMassimo to strike out. However, Womble blasted a double to left that scored two, making it 6-2 in favor of Arlington. After the double, Tyler Callahan came in to relieve Kitzmiller, and allowed a sacrifice grounder to third from Nicholas Taylor to score another run, but got out of the inning without allowing any more damage.
Callahan was able to cruise through the rest of the game, allowing just two Pittsfield baserunners over the next two innings and no runs, closing out Pittsfield for the save.
The Ron Tellefsen awards, which go to the players of the game from each team, were awarded to Brendan Jones and Christian Womble. Jones ended his day 2-3, with an RBI and a run scored, as well as four shutout innings pitched, a walk, two hits and five strikeouts, while Womble was 2-4 with two RBI.