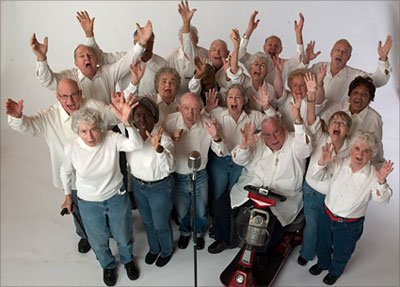 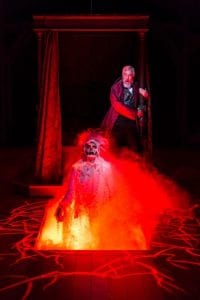 Now in it 22nd season, this production of Dickens’ classic, adapted by and originally directed  by Michael Wilson, and directed by Rachel Alderman, has proven itself to be the gold standard of holiday fare. A large cast, stunning sets, costumes, and lighting, dazzling special effects, and family friendly, it’s a great way to kick off the holiday season. It’s recommended for kids 8+, and there’s a special sensory friendly performance on December 7. For details: www.hartfordstage.org.

When Barrington Stage commissioned and presented the world premiere of Christopher Demos-Brown’s tense drama, American Son, audiences were riveted by this play which explores family relationships and racism. A black mother and white father are called to a police station, when their son has been involved in “an incident.” Its shocking resolution will have you talking about your own feelings about race long after the curtain falls. Tamara Tunie and Michael Hayden starred in the Berkshires. Kerry Washington starred in the Broadway production which was filmed for Netflix, and it’s scheduled to premiere in November. TheaterWorks opens their season with American Son in their newly renovated Pearl Street theatre in downtown Hartford. For details: www.twhartford.org

This Stephen Sondheim musical, with book by John Weidman has shocked an enthralled audiences since its premiere in 1990. It profiles a group of Presidential assassins and wanna-bes in a carnival setting, with a fascinating musical score. It’s difficult to say whether the show is actually sympathetic to historical types like John Wilkes Booth, Lee Harvey Oswald,  and John Hinkley. But, in todays political climate, it’s still tensely relevant. K&E Theatre Group is the ambitious up-and-coming area theatre group, who are performing at the Northampton Center for The Arts. For details: http://www.ketg.org/ 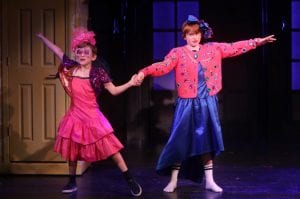 Jon Marten as Michael and Liam Liam Vincent Hutt as Billy in Billy Elliot: The Musical at Goodspeed. (Photo by Diane Sobolewski)

The Elton John and Lee Hall musical based on the English film, electrified Broadway, winning 10 Tony Awards along the way. Billy, a small town boy is caught between his family’s coal-mining roots and his newly discovered passion to dance. Is his future boxing gloves or ballet shoes? Gabriel Barre, the innovative director whose Sweeney Todd was one of the most exciting Goodspeed productions I’ve seen, stages the musical, and Mark Kimmelman provides the choreography. For details: www.goodspeed.org.

This breezy Stuart Ross musical is a favorite in theatres across the country. Once upon a time, a semi-professional harmony group was in their cherry-red 1954 Mercury convertible on their way to their first big gig at the Hilton airport cocktail bar. They were rehearsing their big finale and just getting to their favorite E flat diminished seventh chord when they were slammed broadside by a school bus full of teenage girls on their way to witness the Beatles make their television debut on The Ed Sullivan Show. None of the girls were injured, but all four guys in the harmony group were killed instantly. Somehow, though, they posthumously manage to take the stage for one final gig. For details: https://majestictheater.com/ 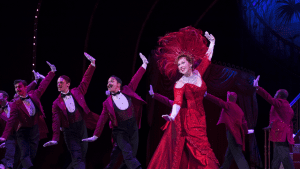 Hello, Dolly! is one of the most beloved American musical classics, and its recent Broadway revival, created for Bette Midler, ramped up the original Gower Champion production that made history in 1964. Carolee Carmello from Broadway’s Parade, and John Bolton from Hartford Stage’s and Broadway’s Anastasia head the cast. This tour of Hello, Dolly! has been selling out in every city it plays. For details: www.bushnell.org.

The Hartford Symphony Pops is probably the most exciting pops series, aside from The Boston Pops, with its programs at The Bushnell and Talcott Mountain. The film that gave the world one of its greatest movie heroes, Indiana Jones, is back and better than ever before! Relive the magic on the silver screen with the original great adventure, Raiders of the Lost Ark with John Williams’ epic score performed live to picture by the Hartford Symphony Orchestra! Armed with his hat, whip and wits, our intrepid hero must face formidable enemies – and impossible odds – to save the day and the world. By the way, Karen Allen, one of the original stars, is a Berkshires resident, where she acts, directs, and films. For details: www.bushnell.org. 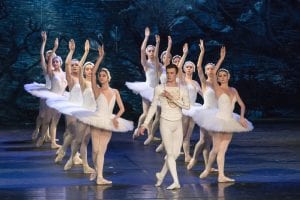 Russian Ballet Theatre. Swan Lake. November 10 at The Bushnell, and November 15 at The Berkshire Theatre Group’s Colonial Theatre in Pittsfield.

Outside of the summer dance season at Jacob’s Pillow, ballet performances outside of The Nutcracker season are few and far between. The Russian Ballet Theatre brings Swan Lake to the region twice. The Russian Ballet Theatre’s new production of Tchaikovsky’s timeless classic is a dazzler. Choreographer Nadezhda Kalinina from The Mariinsky Theatre retouches the oldest St. Petersburg version of the ballet and adds her vision and something more that undoubtedly will leave audiences flushed with emotion. Designed by the young, accomplished Mariinsky Theatre’s Sergei Novikov For Hartford details: www.bushnell.org. For Pittsfield details: www.berkhiretheatregroup.org. 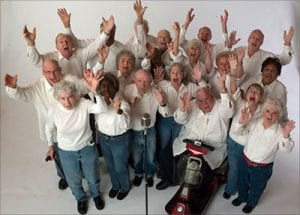 You’ve got to love the senior singers with [email protected] Chorus, who have made that Northampton muisc group world-renowned. They’re combining forces with members of the Springfield Symphony Orchestra in a performance that combines their classic rock with a little classical. For details: www.aomtheater.com.