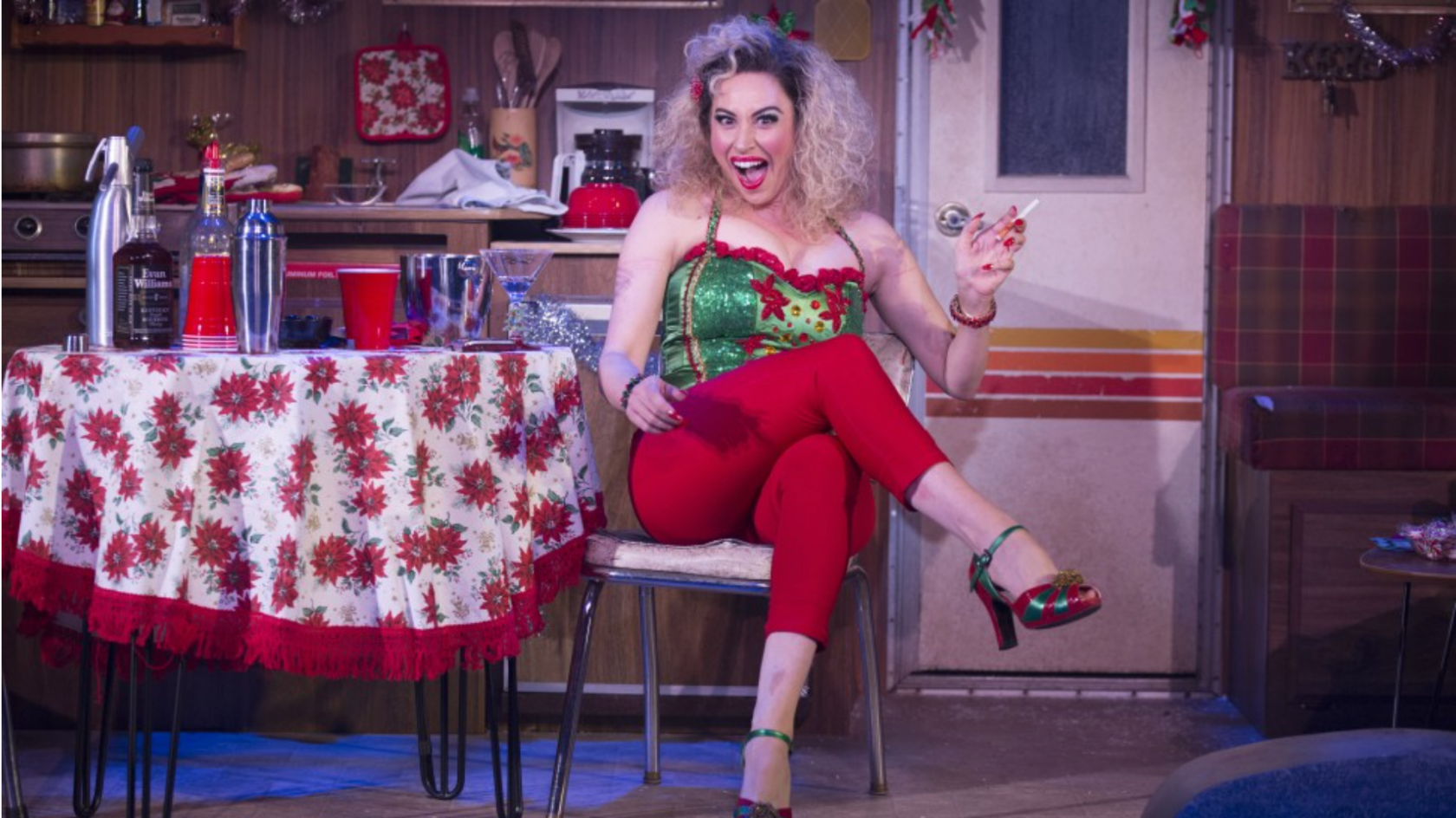 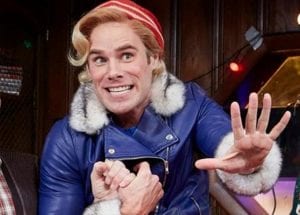 Matt Wilkas in ‘Christmas on The Rocks.’

‘Christmas on The Rocks’ returns to TheaterWorks Hartford

Hartford’s twisted, hilariously funny holiday tradition, Christmas on The Rocks returns to TheaterWorks Hartford for the holiday season, Dec. 1-31. The production, created and directed by Rob Ruggiero, is being filmed for streaming. The good news is that you don’t have to drive to Hartford and line up for tickets (it’s always a holiday sell-out), and the better news is that your friends, who live too far away to visit Hartford for the holidays, can stream it wherever they are.

In a series of playlets, your favorite kids from Christmas stories past—Clara from The Nutcracker, Tiny Tim, Charlie Brown and more, all grown up, shaken, stirred, and twisted, show up at an out of the way bar on Christmas Eve. The stories are told by some of the best contemporary playwrights, from John Cariani to Jacques Lamarre, and acted by a polished group of comedic actors, among them Jenn Harris, three of her former leading men, Harry Bouvy, Randy Harrison, and Matthew Wilkas, plus Ted Lange as the Bartender. Ms. Harris spent an hour chatting about Christmas on The Rocks on ArtsBeat TV/Radio. https://thewestfieldnews.com/review-theaterworks-christmas-on-the-rocks/

I’ve seen Christmas on The Rocks four times over the years, and I continue to find it incredibly funny (and yes, it has a heart). It’s the perfect alternative to the more traditional holiday fare like The Nutcracker or A Christmas Carol. And, as the finale for a pandemic year which has been a struggle for so many of us, Christmas on The Rocks is the laugh we all need right now.

Facing The Future: Climate Change Theater, an online short play festival, will be presented by the LAVA Center in Greenfield. In plays penned by 13 playwrights from 3 continents, characters from cerulean warblers, insects, brown bull catfish, and fire to a wide age range of humans plus a couple of time-traveling aliens confront questions of our collective survival. The plays are divided into two programs. Program A (Dec. 4) offers plays of animal perspectives and extreme weather, Program B (Dec. 5) offers food for thought and action. The entire set of plays can be viewed on demand between Dec. 6-8. The plays are written by Lindsay Adams, Sara Becker, Kay Bullard, Patricia Crosby, Colette Cullen, Stephen Fruchtman, Nina Gross, Jan Maher, Rex McGregor, Michael Nix, Candace Perry, Vanessa Query and Karen Shapiro Miller. Twenty-eight actors from as near as Greenfield and as far as Dublin, Ireland and Auckland, New Zealand bring it all to life via Zoom. For details: https://localaccess.org. 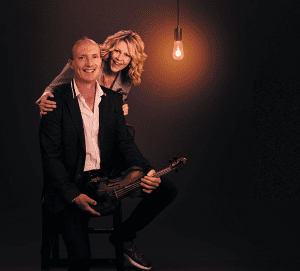 A Celtic Family Christmas at Home, a virtual holiday program with Natalie MacMaster and Donnell Leahy, streams beginning Dec. 12, courtesy of the Mahaiwe Performing Arts Center in Great Barrington. MacMaster and Leahy have, prior to the pandemic, toured this holiday tradition to theatres around the country. Mostly music, this year’s stream will include candid moments around the tree and in the kitchen. For details:www.mahaiwe.org. 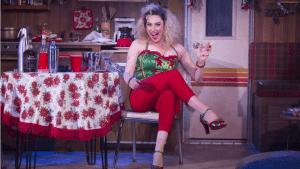 Lesli Margherita as Cindy Lou Who.

Who’s Holiday, Matthew Lombardo’s silly Off-Broadway comedy with Lesli Margherita as Dr. Seuss’ “Cindy Lou Who” will stream Dec. 11-15, as a benefit for Broadway Cares/Equity Fights AIDS. Lombardo’s play is an expanded version of a sketch he originally wrote for TheaterWorks’ Christmas on The Rocks, when that production premiered in 2013. Lombardo recast and rethought the sketch, and brought it full-tilt, this time with Margherita, who got rave reviews in the Hartford Stage musical The Flamingo Kid. Who’s Holiday tells the story of the beloved Seuss character, who has fallen on hard times, and is now living in a trailer park. And, it’s strictly adults only. For details:www.broadwaycares.org. 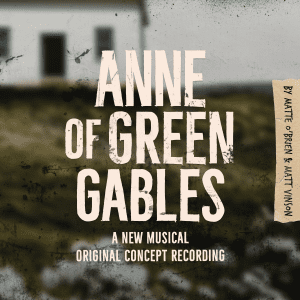 Anne of Green Gables, the new musical based on the books by L.M. Montgomery, was scheduled to have its world premiere this year at Goodspeed Musicals, but the pandemic postponed that to next season. Meanwhile, Broadway Records has released a concept album of the score, with nine tracks from Matte O’Brien and Matt Vinson. The recording features the vocal talents of Diana DeGarmo, George Salazar, Colin Donnell, Patti Murin, Aurelia Williams, Chris McCarrell, Emily Bautista, Michelle Veintimilla, and more. Goodspeed will present a virtual conversation with the authors on Nov. 24 at 7 p.m. For details:www.broadwayrecords.com.

Masterworks In-Depth with Carolyn Kuan celebrates music that the Hartford Symphony Orchestra would have performed on their December masterworks series at The Bushnell. Guests include acclaimed pianist Alessio Bax, who was scheduled to perform Grieg’s Piano Concerto with the HSO, and choreographer Miro Magloire, Artistic Director of New Chamber Ballet, who discusses The Nutcracker. The program is available for streaming Dec. 4-9. For details: www.hartfordsymphony.org., 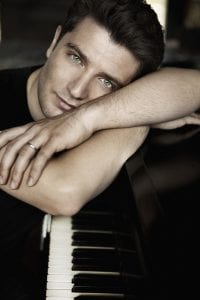 Holiday Gift Idea. Those who love Broadway are aware of Michael Riedel’s books, plus his many must-read theatre columns in the New York Post. His newest book, Singular Sensation: The Triumph of Broadway has just been published. It’s the extraordinary story of a transformative decade on Broadway, featuring gripping behind-the-scenes accounts of shows such as Rent, Angels in America, Chicago, The Lion King, and The Producers—shows that changed the history of the American theater. It’s just been published by Avid Reader Press / Simon & Schuster, and it’s available in print and electronically, wherever you get your books.