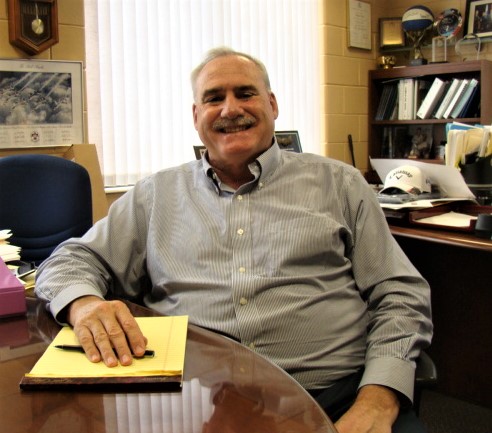 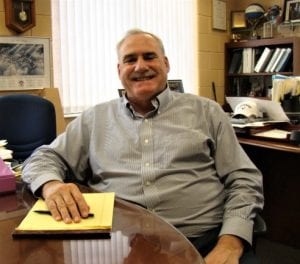 Bill Parks discussed plans for the Boys & Girls Club of Greater Westfield on its 50th anniversary. (Photo by Amy Porter)

WESTFIELD – The City of Westfield wasn’t the only one to celebrate a birthday this year.

The Boys & Girls Club of Greater Westfield turned 50, and is just now ramping up for the celebration, with plans for expansion and big events scheduled.
“Being the same year as the 350th, we didn’t want to conflict,” said Chief Executive Officer William R. Parks, as to why they waited to celebrate. But now the club is literally bursting at the seams, and ready to announce its plans.
The Boys and Girls Club serves 350 kids a day, which Parks said will increase to 400 when winter sports, including basketball, swim team and wresting start. He said there is a need for more space.
On Oct. 21, Parks went before the School Committee, seeking to amend its lease for the property. The land the Boys & Girls Club and Children’s Museum sit on is school property, which they lease for $1 for 99 years. In order to expand, they need an additional 100 by 130 feet of land in the rear of the building, Parks said.
Receiving the School Committee’s blessing, they filed their application last week for a $1 million state grant from the Early Education and Out of School Time (EEOST) capital fund, to expand their licensed after school child care program space. The total cost of the project is anticipated to be $2.2 million.
“We currently have maxed out overall use of the building for licensed child care, in the back of the building where kids ages 5 to 13 go as a group. We’re limited for the number of kids by the amount of space,” Parks said.
In addition to three licensed child care rooms to serve 80 additional children, and one preschool room for 20 additional children, Parks felt if they were going to build additional space to meet that need, they would also add space for their growing theatre, music and dance classes.
“We don’t have a stage or a music room,” Parks said. As part of the grant, half of the space will be for a performance area, larger dance studio and a music room along with storage and bathrooms.
Parks said if they receive the expansion grant, they will start building in July, and it would take approx. 30 weeks. Since they would build out the back, they will remain open, he said. “We’re never shut down; always open and ongoing.”
Parks said the arts is important to staff and children. Currently guitar, drum and piano lessons, and some voice classes are offered. He said when they couldn’t find instructors that would stay, he met with Westfield High School Band Director Patrick Kennedy, who has a group of musicians that maintain a certain grade level. Parks said they are now hiring the high school band members to  give music lessons.
Westfield is also one of only two Boys & Girls Clubs in the state being considered by a private Boston group for a performing arts grant, which would help pay for a full-time instructor. The group has already made a site visit to Westfield.
“We’re excited that we’re one of the finalists, and the first one in Western Mass.,” Parks said.
The Boys & Girls Club also recently received a 21st century grant to fund an after school program for students at Franklin Avenue Elementary School, aimed to keep kids on track, with homework enrichment and other learning activities (even though they may not know it), he said. Westfield Boys & Girls Club was one of only 12 agencies of any kind in the state to receive funding for the program, which started in October, and also involves parents.
Parks said he worked with Superintendent Stefan Czaporowski on the 21st century grant.

“We are an extension of the school day, with opportunities for learning in after school settings,” he said. “All clubs have a core set of programs that they have to provide, but each has a unique identity.”

Parks said their club is very involved with the community; the School Department, Park & Recreation Committee, the YMCA, and health agencies.
“We know we’re not the one and only thing in the community. We need to work with everybody,” Parks said, adding that it’s the same with sports. If they see kids that have advanced to a level beyond theirs, they recommend them to another program. “A big part of us in Westfield, is we work with a lot of other agencies.”
As for other big events planned for the 50th anniversary, Parks said to be on the lookout for First Night, which is coming back. He said the Boys & Girls Club, in conjunction with the Amelia Park Skating Rink and Children’s Museum, will host a family-friendly event from 4 to 6:30 p.m., that will also include fireworks.
The Boys & Girls Club is also planning a formal 50th anniversary gala Feb. 8, 6 p.m. at Tekoa Country Club. Parks said they are hoping to bring back Boys & Girls Club alumni and are looking for old pictures, keepsakes, trophies, flags – anything people might have from their days at the club.
“It’s been great,” said Parks of his almost 16 years at the club. “When I got here in 2004, the budget was $600,000. We started looking at things, and kept growing, adding more programs, services and reaching out to find what’s needed. This year, the budget is $2.5 million, balanced by the way.”

The goal for this anniversary year is to raise $500,000, which will go towards the expansion.