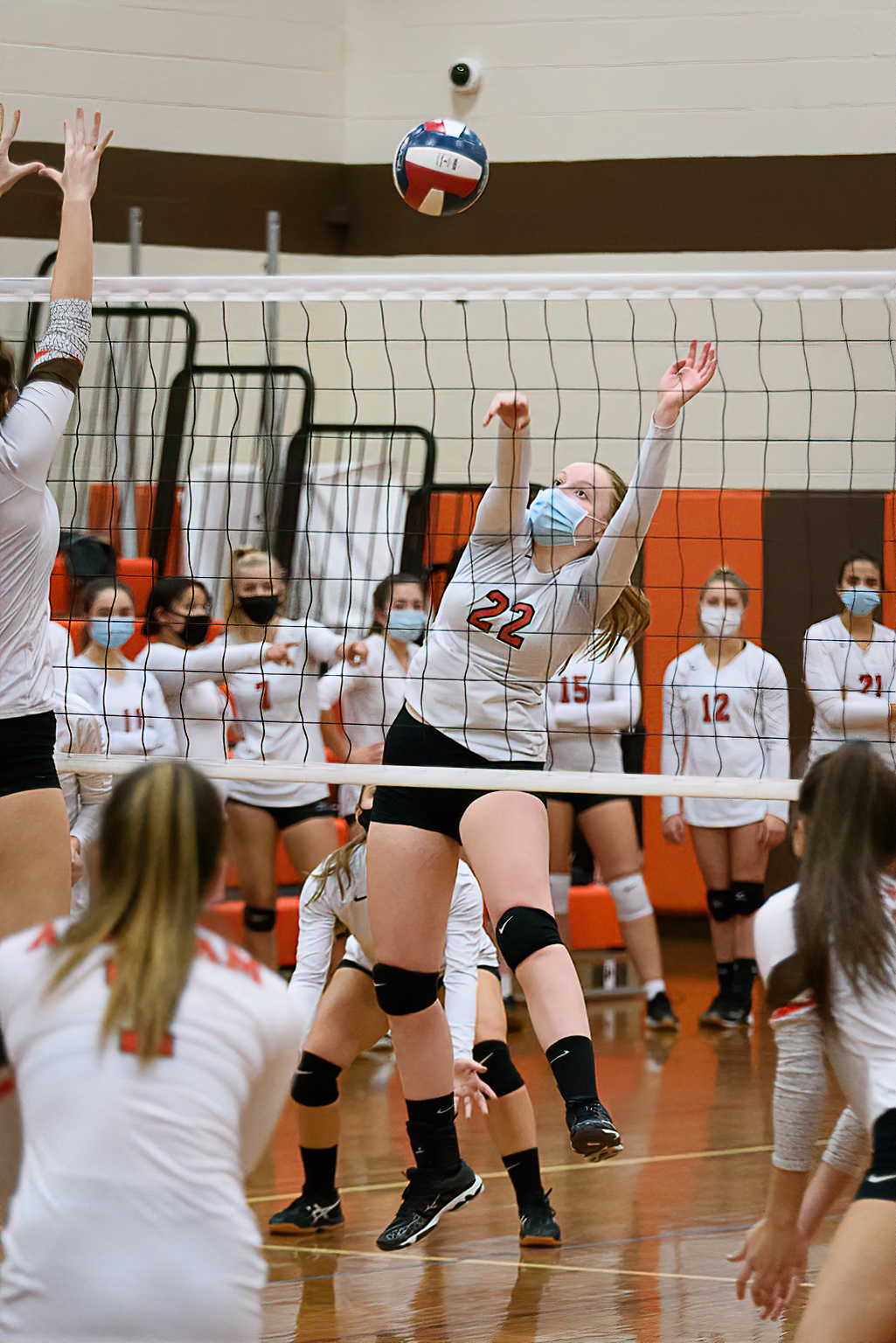 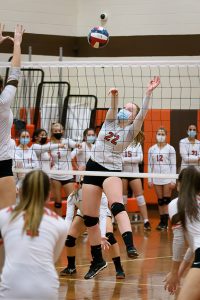 AGAWAM – There is no championship – – COVID made sure of that – – but no one can question the Westfield Bombers girls volleyball team if they label 2020 a banner season.
As they have done all season, Westfield established a commanding lead, going up 6-0 in the first game and cruised to a three-set sweep of Agawam on the road Tuesday night, 25-9, 25-21, 25-22.
It was the Bombers ninth straight win this season, and the final game of 2020.
“We didn’t know if this season would happen, never mind go undefeated,” said Westfield senior Viktoria Pavlyuk, who logged a team-high 15 kills against Agawam. She finishes her career with a total of 450 kills.
During the team’s fast start, Kaitlin Price reeled off six straight serves, including an ace that caught the top of the net and trickled onto the Agawam side of the court without return. Irelis Rodriguez Escobar also landed an ace during a 4-0 run as the Bombers built another decent lead.
The middle frame was much closer, especially early on with the two teams tied at 1-1, 4-4, 5-5, 6-6, 7-7, 8-8, and 9-9 before Westfield took a lead it never relinquished. The key point came when Pavlyuk unleashed a blistering kill that smacked an open piece of Agawam hardwood for a thunderous splash that reverberated all throughout the gymnasium. The service point gave the Bombers a 10-9 advantage that they continued to build upon.
Pavlyuk put the icing on the cake later in the set, hanging in mid-air, and completing a couple more “splash plays,” this time a bit softer as she strategically tapped the ball into open spots with a graceful touch.
Agawam would not go quietly into the night though.
Late in the match, Westfield found itself trailing by eight points, 20-12. But behind more solid serves from Price, the Bombers went on a sterling 7-0 run to cut their deficit to one, 20-19.
Westfield tied the game at 21- and 22-all before going ahead and securing the victory. Pavlyuk launched a couple of unstoppable kills and Rodriguez capped it all off with a kill of her own, smacking the ball onto the uppermost part of the net. The ball tumbled over the net, registering the team’s 25th point and signaling the program’s first unbeaten season in school history.
“You never really set out to go undefeated,” said Westfield girls volleyball coach Tyler Wingate, who last led the 2018 boys volleyball team to a one-loss season and state championship title. “It’s a daunting task. We respect every opponent and approached every match the same way.”
Just like with previous boys’ teams, the Bombers head coach got his players to buy in – – and the rest is history.
Notes: Abigail Menzel finished Tuesday’s contest with 23 assists and six digs. Rodriguez had 12 digs.