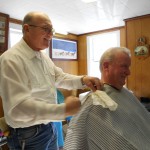 John Penn finishes up with Tom Stout of Montgomery.  “It’s been a great trip, Tom,” Penn said when he finished.  (Photo by Amy Porter)

HUNTINGTON – This past Saturday, John Penn cut his last haircut at around noon. He had already taken his sign down that morning.  Penn, originally from Ohio, opened his barber shop in Huntington in August, 1964, after coming to the area to serve at Westover Air Force Base as a gunnery assistant’s technician.
After 46 years, the day was bittersweet.  “It’s been a tough day. I’ve been taking down pictures, and looking through things,” Penn said.  “You gotta know that at my age, most of the people I’ve known here are gone.”
“Every haircut is different, and every personality is different. And that’s the real story of a country barber. They’re all friends. There are no customers. All of my customers are friends,” Penn said.
Penn is not retiring, however. “I’m starting a whole new career, and I’m going to be 75,” he said, with excitement in his voice.  John and his wife Andree are heading off to take over the horse program at Freedom Village USA in Lakemont, NY, a Christian ministry and school for troubled youth.
“We were looking for a place that would take our horses and treat them decently,” John said, explaining how he got involved with Freedom Village.  Last year, Andree, an accomplished equestrian, was thrown from her horse, sustaining serious back injuries. John said she is 95% recovered, but one of the things that didn’t come back was her balance.  John said Andree lost her confidence when she lost her balance, and didn’t feel comfortable on the horses anymore.
The Penns have three horses, a mother and two daughters who they birthed themselves. “These are our kids,” John said.  He said they were having no luck in finding a home for the horses, when somebody told them about Freedom Village.
“We went up, and the place is just unbelievable. So we brought the horses up. But within three weeks, they quit writing to us. They said the barn manager quit, and he was the one writing,” Penn explained.
They went up again, concerned about their horses. They were then offered the position of overseeing the equine program for the school, a voluntary 12-month program for 150 youth. The equine program, which currently has 35 horses including their three, teaches responsibility and self-esteem through caring for the horses.  The position is considered a missionary endeavor, so the Penns will be given room and board, but must raise support for their operating and living expenses.  John and Andree are members of the Otis Congregational Church.
Andree is fully on board with the move. “I’m really excited,” she said. “It’s a new adventure.” Andree will be teaching horsemanship at the school.
The Penns are hoping to leave by next weekend, to avoid the Thanksgiving traffic. They will keep their home in Huntington, however.  And for the people who supported his barber shop over the years, John had this message: “Thank you for your support and friendship for the last 46 years. It’s been a wonderful trip. I’ve met some wonderful, wonderful people.”