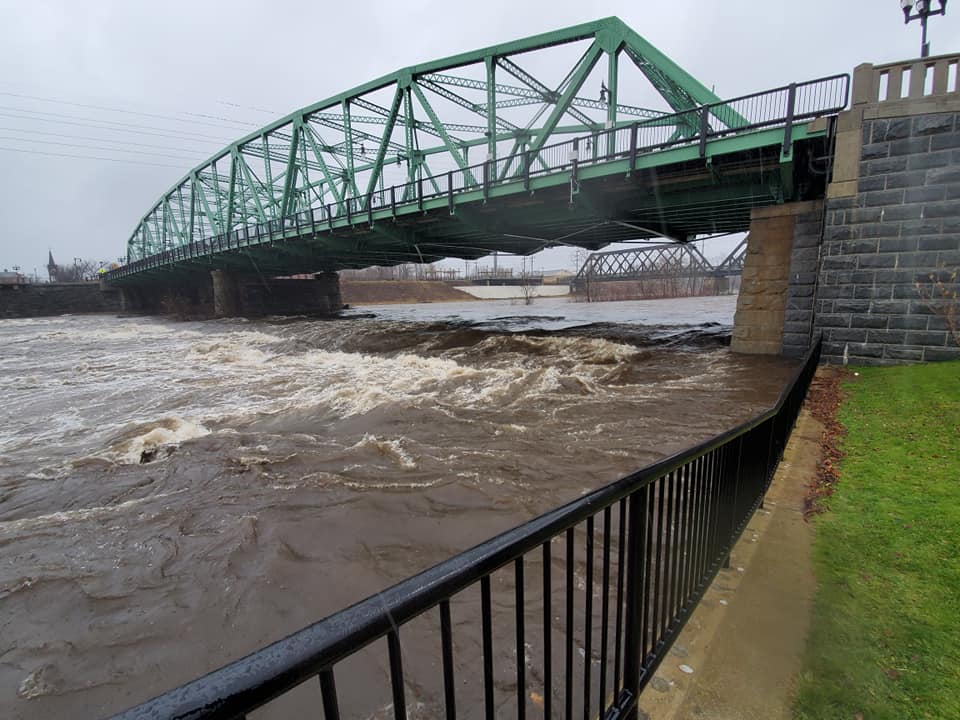 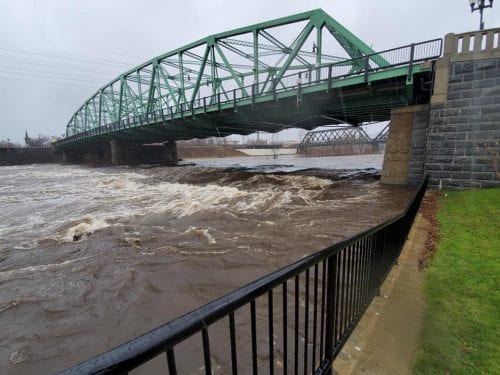 WESTFIELD – Residents may have noticed high rushing water on the Westfield River after the rainy Christmas. Following the storm, Westfield Flood Control Commission Chairman Albert G. Giguere, Jr. went on social media and spoke to The Westfield News about the river and flood control in the city, after receiving a couple of calls from concerned residents.

Giguere said the Westfield River has five branches, including the Little River and another upper branch that feeds into it. He said Knightville and Littleville Dams in Huntington offer flood control on only two of the branches.

On Christmas Day, over an inch of rain fell and combined with a flood of snow melt to cause the rushing waters. Giguere urged people to stay out of the water with kayaks or canoes, due to the abnormal amount of debris and undercurrents.

“It’s different than when they release water in the spring for the canoe race; those are controlled events, water coming from a controlled point,” Giguere said.

“This is just water coming from everywhere, from every brook and stream that flows into the river, which creates a lot of snags,” he said. He also noted that the water temperatures are very cold, another serious risk.

However, Giguere said there was no risk of flooding from this storm, and there wasn’t enough volume to put any significant pressure on flood structures in Westfield. “Westfield was up, but not enough for an emergency,” he said. Flood warnings had been put up for the Connecticut River during the storm, due to the large amount of snow melt coming from Vermont and New Hampshire, which caused the concern. 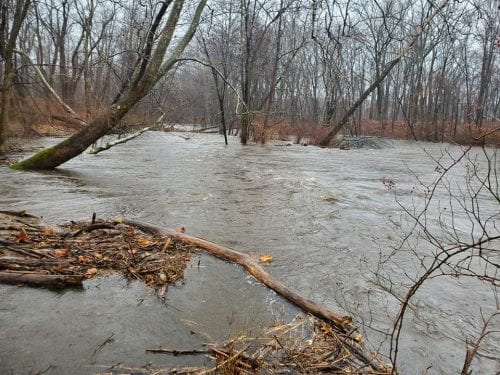 Giguere said the Flood Control Commission has been doing a lot of work over the last eight years or so to repair and maintain some of Westfield’s long-neglected flood control structures. “We’ve done a lot of work, but we still have a long way to go,” he said.

One area he monitored during this rain event was the Little River Levee. He said the river rose above the conduits, which are in disrepair, and water was back flowing into the canal on the other side.

Currently, the commission is seeking to repair the conduits, to prevent the backflow. They just approved a plan for Tighe and Bond to do Research & Development (R&D) engineering studies on the conduit repairs, which have to be presented to the Army Corps of Engineers. Giguere said pending approval of more funds from the City Council, they may be able to get them repaired, “but it won’t be cheap,” he said.

He said because the Little River Levee has been rated unacceptable by the ACE, the city is not eligible for their financial assistance, and may not be eligible for other assistance because it hasn’t been maintained properly. “We are inquiring with MEMA to see if we qualify for FEMA grant money,” Giguere said.

Two city dams that are eligible for grant funding and have been in the R&D process with the Natural Resources Conservation Service (NRCS) over the last two years are the Powdermill Brook and Armbrook dams. Giguere said Armbrook is for “all intents and purposes done,” and Powdermill is six months behind.

Giguere said at its last meeting, the Flood Control Commission voted to accept all of the NRCS’s recommendations for the rehabilitation of the dams, and will be sending them to the City Council in the next couple of months.

The City Council will then have to vote on its 35 percent cost share of the projects, or reject the proposal. However, he said if they do not fund the projects, the responsibility for bringing both dams to meet current standards will be entirely the city’s responsibility, and will cost more in the end.

“The city’s commitment will probably be late spring, early summer. The Mayor and City Council will have to commit to going forward,” Giguere said.

Giguere said that the Armbrook and Powdermill dams and the Little River Levee are the three biggest concerns in terms of flood control in Westfield, and the Little River Levee is the only one without a long term plan. “We have to repair the drainage conduits before we can do that,” Giguere said. He said after they are repaired, the levee may also qualify for federal funds at an even more favorable rate in terms of the city share.