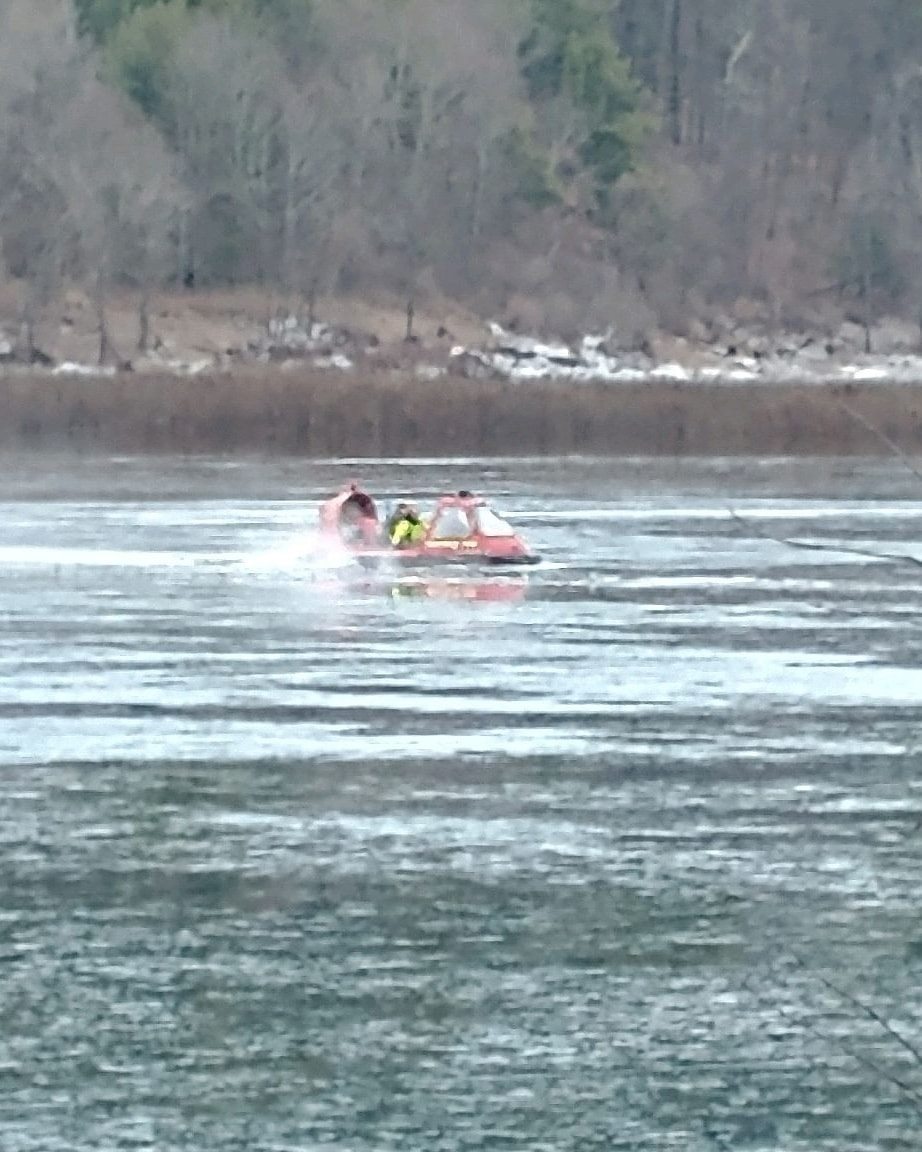 HUNTINGTON – A hovercraft with a firefighter in a thermal suit carried a hunter to safety after the man got lost hunting and became stranded in the middle of a pond about 300 feet from shore in the Knightville Dam area during the holiday week, according to local emergency officals.
After becoming exhausted, cold and wet walking through ice and water, a hunter became stranded on an ice island in the pond late in the day on Dec. 28. The man called 9-1-1 from his cell phone, and dispatchers from Northampton’s control center were able to pin point his location using GPS from his cell.
Huntington Fire, Police and Hilltown Ambulance were dispatched, and requests were made for a Huntington Emergency Management drone and Westfield Fire Department hovercraft. 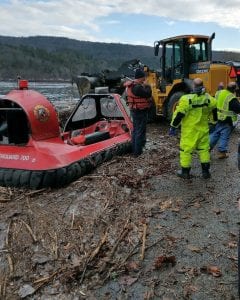 “Our people knew well enough to make that call early for the hovercraft to get things rolling,” Huntington Fire Chief Josh Ellinger said.
Due to large amounts of ice and debris on the roads going into the Knightville Basin, access to the scene proved to be very difficult, according to reports.
Huntington Police Chief Robert Garriepy and a Huntington firefighter trudged on foot closer to the reported location and located the victim standing on an island of ice approximately 300 feet from shore.
The drone was deployed to relay messages to the victim and to monitor his condition.
Mutual Aid was also requested from Northampton Fire Rescue with cold water exposure suits, ropes and personnel, reports went on to state. Huntington Highway Crews were able to clear ice and debris on the access roads to allow vehicles closer access to the scene. A second drone was requested from Massachusetts Department of Fire Services. Westfield Fire hovercraft was deployed with a Huntington firefighter in an exposure suit to rescue the victim while Northampton firefighters stood by in case they were needed to assist. The victim was brought back to shore and tended to by Hilltown Ambulance, and his hunting rifle was secured by Environmental Police.
The hunter was reported to be in “good” condition.
The joint effort between departments and neighboring communities proved to be an overwhelming success. 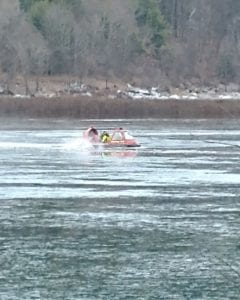 Emergency personnel from Huntington and Westfield came together to rescue a hunter from an ice island in the middle of a pond in the Knightville Dam area during the holiday week. (HUNTINGTON EMERGENCY MANAGEMENT PHOTO)

“It’s all about having good mutual aid agreements, knowledge, and the proper equipment to get the job done,” Ellinger explained.
Area firefighters are also no stranger to these type of incidents, and, in fact, have been performing ice rescue training with other fire departments in recent weeks.
On average, four or five ice fishing deaths occur in North America every winter, usually the result of thin ice, according to comingbackalive.com/winterfishing. River ice is usually 15 percent weaker than pond or lake ice. New ice is usually stronger than old ice. As ice ages, the bond between the crystals decays, making it weaker even if melting has not occurred.
Slush is a danger sign, indicating that ice is no longer freezing from the bottom and indicates weak or deteriorated ice.
“In general, just don’t go out on the ice, especially in our area, unless it’s thick enough,” Ellinger said.
In Southwick, Congamond Lakes Management Committee Chairperson Dick Grannells urged extreme caution when it comes to ice on the ponds.
“We have a thin coating of ice in some locations,” Grannells said, “but the lakes are not frozen in any way, shape, or form. I am really, really concerned that we will not have any good ice this winter.”
Grannells said any ice that has formed has melted away with the rain, daytime sunshine, and rising temperatures, before any nighttime refreezing occurs. According to Grannells, it would take several prolonged days, if not weeks, of deep freezes for the ponds to completely ice over at this point. Temperatures are expected to reach the upper 30s and low 40s for much of the next two weeks.