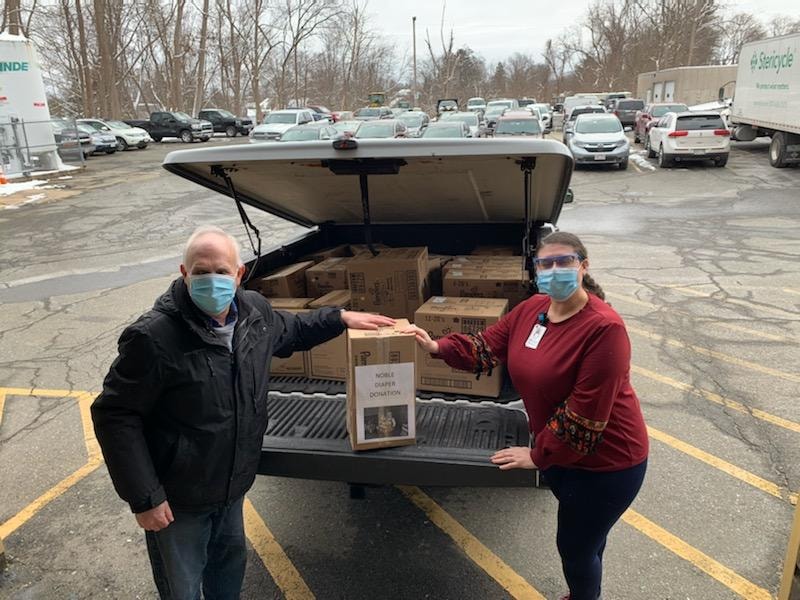 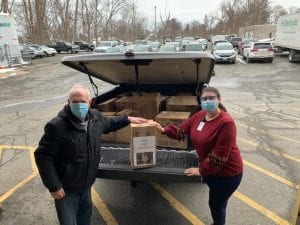 Kiwanis Club member George Delisle picks up a truckload of diapers and baby supplies from Baystate Noble for delivery to the Village Closet in Huntington. (PHOTO SUBMITTED)

HUNTINGTON – Kiwanis Club member George Delisle delivered a truckload of diapers, baby wipes and baby shampoo to The Village Closet in Huntington, thanks to a generous donation that he picked up at Baystate Noble this week.

Mollie Hartford, director of outreach and development for It Takes a Village said the donation was part of a Community Impact Grant of $5,000 the non-profit organization received this year from Baystate Health. She said $500 is in in-kind donations, which included the 2,600 diapers that were delivered.

Hartford said The Village Closet has the only diaper bank registered with the National Diaper Bank Registry, and is the only one to her knowledge in the area. She said they also received 2,000 newborn diapers from the Ronald McDonald House in Springfield, and more from the United Way of Hampshire County.

The Village Closet relocated in August 2020 to the former St. Thomas Church on 2 E. Main St. in Huntington. In addition to diapers, they offer maternity, baby, and children’s clothing, supplies and toys. All items are free to everyone in the community, regardless of income or town of residence.

“We gave away just under $100,000 worth of materials in December – usually what we give in a whole year. People came from all over,” Hartford said, adding they do recommend programs in other towns that are closer to people that come from far away, but nobody gets turned away.

In addition to the need for diapers, Hartford said they get a lot of requests for baby formula, because a lot of food pantries don’t carry it. She said one mother told her that even one can of formula makes WIC dollars go farther.

“It’s such an amazing space. We’re grateful every single day for Gerry (Farrelly, owner),” Hartford said about their new location in the former church, adding that when they do get a large donation like the one from Baystate Health, they now have the space to put them out. “We are also big enough to let in one appointment at a time,” she said.

Appointment and donation information may be found at hilltownvillage.org, emailing [email protected], or by calling 413-650-3640.