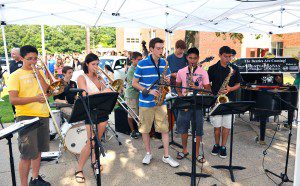 On Friday September 7, Westfield High School will host the Beatlemania Stage Show accompanied by members of the high school band. The performance consists of four musicians who delve into the impossible: recreating the experience that was the Beatles.
The Beatlemania Stage Show chronicles the career of the legendary band beginning with their early hits after coming to America through the infamous break-up in 1970. Costume changes and authentic Beatles instruments enhance the musical journey through time by the stage show. Over 25 of the greatest Beatles tracks will be played throughout the night.
“It’s going to be more or less as if you were at a Beatles concert,” described Westfield High School Band Director Patrick Kennedy. “The show will start just like it’s 1964. There will be a multimedia presentation at the beginning. The performers will come out as a quartet and become the Beatles. The group brings in their own lights, sound and vintage instruments.”
Kennedy views Beatlemania as a “great opportunity for kids to see how a professional program is put together in a short period of time, and right here in our auditorium.”
The Stage Show expressed interest in working with the high school last year, but due to prior commitments – including a New York performance in honor of the ten-year anniversary of 9/11.
Kennedy was optimistic about the number of Beatles fans among his students, and about their overall ear for quality music.
“A lot of kids are big fans. Isn’t that part of my job? Awareness,” said Kennedy.
Proving no generational disconnect exists between the Beatles and current students, seniors Chris Cloud and Peter Kochanek are ecstatic to be a part of the show. The two describe themselves as the band’s biggest fans.
“I listened to nothing other than the Beatles until age 9,” said Cloud, who is most excited for the “insane” drum solo in “The End,” his favorite Beatles tune.
Kochanek picks “Sgt. Pepper’s Lonely Hearts Club Band” as his favorite, a track that the band will perform during halftime at the high school’s home football games.
As percussionists, Cloud and Kochanek will not be performing in their own department (Beatlemania has their own drummer), but will instead lend their vocals to the show. They join 80-100 additional members of the Westfield High School Band participating in the concert.
Band members first met on August 22 to prepare for the Stage Show. Kennedy knows the next week will be difficult, but confidently declared, “we’ll get it done.”
The main goal of the concert – along with providing a night filled with nostalgic entertainment – is for the Westfield High School Band members to raise money for their biannual spring trip. Students who sell in the neighborhood of 20 tickets may have the entire trip paid for.
This year’s spring destination has not yet been decided, with Kennedy only revealing that it will be on the east coast. Kochanek hopes for a trip to Disney World.
“I think Disney World would be an optimal spot. The band has gone to Florida,” he said. “This band has come to a place where we are ready for that.”
Regardless of where the band travels, all members are sure to be in for a great time.
“Anywhere we go, we’ll have a blast,” said Cloud.
“It’s just fun to go somewhere,” Kochanek added.  “We don’t go to many places. It’s exciting to go, even for the New York trip last year. We did enough fundraising that everyone went. That was the biggest thing, that everyone was able to go.”
A potential free trip is not the only incentive of selling tickets for the students: the biggest seller will receive a George Harrison Magical Mystery Tour Guitar.
Anyone in attendance will appreciate the Beatlemania performers’ likeness to the actual Beatles, as Cloud says the quartet is “pretty spot on.” The band members were impressive themselves. Anyone listening in on yesterday’s practice would think that the band had been at it for weeks.
Tickets for the Beatlemania Stage Show are currently on sale, and can be found online or at Big Y and Rocky’s.

Kevin Romani can be reached at [email protected]