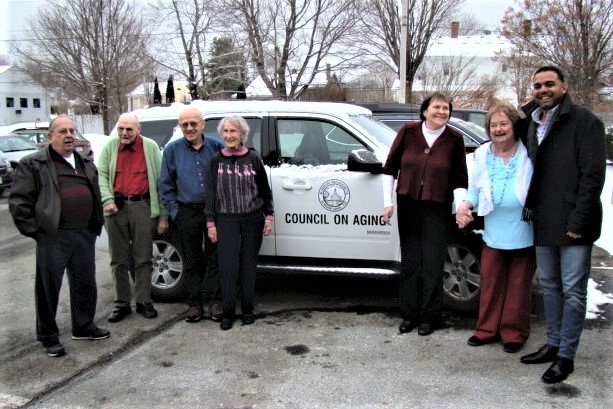 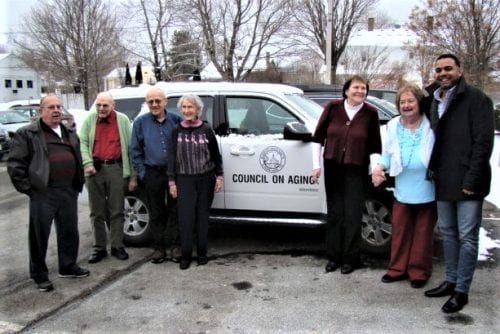 WESTFIELD – Judith MacKinnon, chairman of the Blandford Council on Aging, said she is excited to announce the donation of a Buick Mariner SUV to the COA by a member to help seniors with errands and other transportation needs.
MacKinnon said a couple of years ago their COA, which meets in Blandford Town Hall, participated in a focus group with an outreach consultant hired by a consortium of surrounding towns to discuss what are the greatest needs facing seniors in the hilltowns.
The focus group came back with transportation as being the greatest need. There is no public transportation in any of the towns.
MacKinnon said they sent out surveys to determine what kind of transportation was needed, and where people had to go. She said the town is serviced by the Franklin Regional Transport Authority handicap van to help with medical visits and food shopping, which she said is a wonderful service, but there are limitations.
The COA decided to try to fill some of the unmet transportation needs on their own, and began six months ago recruiting volunteers to transport seniors in their own cars for haircuts and other errands not covered under the FRTA agreement.
Then one of the members of the focus group, Juliana Mueller, who had been thinking of giving up driving, decided to donate her SUV to the town. MacKinnon said arrangements were made, and the town seal was put on the vehicle.
“We’ve just been using it for a few weeks,” MacKinnon said, adding that she wanted to publicize the fact that the town has the car available, so more people may take advantage of the rides being offered.
The COA has also recruited five or six volunteers as drivers who are available on different days of the week. MacKinnon herself took Tuesdays and Thursdays, which she said must be the “busiest days” as she has been keeping busy driving people for blood tests and other appointments, and bringing them to the COA. One woman she drove had a car and license of her own, but could not drive during recovery from an operation, which would be eligible in the FRTA program.
The group is also brainstorming on other ways to use the donated vehicle, such as taking a group of members to the YMCA or to the Senior Center in Westfield.
Ultimately, the COA’s goal is to seek a grant to purchase a handicap van. MacKinnon said they will have a better idea of the need after they track the demand for trips with the donated SUV.