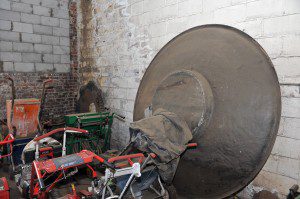 A fountain from the former Thayer Estate in Westfield remains in pieces at the Westfield Parks and Recreation garage. (Photo by chief photographer Frederick Gore)

WESTFIELD – A cascading fountain that was once the focus of a Victorian garden fronting the Broad Street mansion will be used to enhance a proposed urban garden.
The Historical Commission approved, conditionally, the use of artifacts in the construction of a new park to be constructed as an element of the Gaslight District Project that carries a total estimated cost of $5 million.
City Engineer Mark Cressotti said the Gaslight Project would improve the infrastructure and streets, while enhancing pedestrian movement in one of the city’s oldest neighborhoods abutting Elm Street.
Cressotti said existing underground utilities would be replaced to support further commercial and residential development in the neighborhood that lies between Elm and Washington streets and between Court and Franklin streets. Street and sidewalks will also be installed, as well as reconfiguration of the off-street parking facilities and the eventual construction of a parking garage.
A key focus of the Gaslight Project will be to improve and enhance pedestrian movement between the municipal parking facilities and the city’s downtown commercial and entertainment district. The proposed park will be constructed in an existing parking area off Church Street and located to the rear of the School Street Bistro.
The parking spaces lost to the park creation will be replaced in nearby parking lots, Cressotti said.
Cressotti asked the Historical Commission Monday to approve the use of the cascading cast-iron fountain, which once graced the front Victorian garden of the Thayer Estate that was located at the intersection of Broad and East Silver streets and of granite blocks reclaimed from the General Shepard memorial during the recent Main/Broad streets reconstruction.
“This fountain was the focus of the Thayer Victorian Garden back in the day when Broad Street was the center of wealth and power in Westfield,” Cressotti said.
The fountain, which has been in storage at the Park & Recreation Department for decades, will become the focal point of the new park, while the granite will be used to define the park and to create architectural focus and that the park will be a feature linking pedestrian routes to the downtown.
The Historical Commission voted to approve the reuse of the fountain and granite with the condition that the city protect the cast-iron artifact from vandalism and damage.