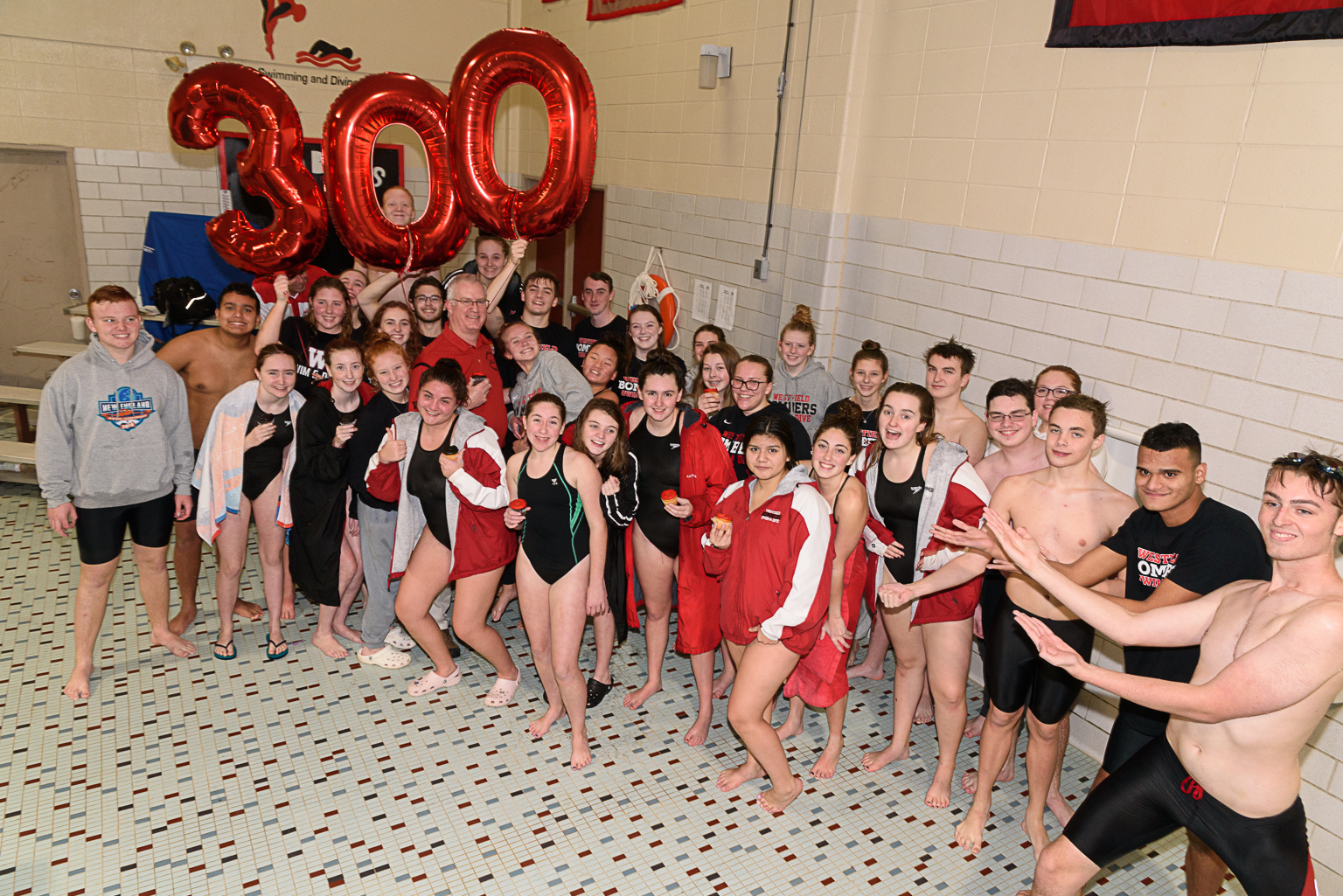 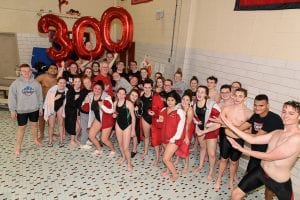 WESTFIELD – Throughout a good portion of the last two decades, the Westfield High School swim program has produced superstar swimmers and championship teams. On Friday, their leader, 19-year head coach Tom Lewis celebrated not only another victory by sweeping Amherst in a dual meet but a milestone in posting his 300th win.
“It’s something I’ve never really thought about,” said coach Lewis, who was showered with a surprise party following Friday night’s victory. “I’ve been blessed with some really great swimmers. It’s hard to think about all the swimmers with all the great winners we’ve had along the way.”
From Westfield High senior swimmer Tommy Russell to former Bomber and current Westfield State swimmer Kelsey Johnstone and countless others like Hope Walsh, Lizzie Fraser, Chris Chambers, Jimmy Stinehart, Brendan Day, John Dolan, Tim Kwarcinski, Nick Rosso, and coach Lewis’s own daughter, Erin Lewis, the list of quality student-athletes that the team has produced is truly something to behold.
“We’ve had teams that are strong because of superstar swimmers, or just teams,” coach Lewis said. “When I started here, I said it’s not just about the individuals. We put team before individual accomplishments. I’ve always approached it that way from day one.”
Aubrey Cook was another such swimmer, continuing her amazing journey with a sprint triathlon victory in 2008 and silver medal finish at the sprint World Championships two years later. She would go on to compete in Olympic distance events, eventually placing in the top 20 at both Nationals and Worlds in the 10k runs.
“Aubrey was the epitome of just a great team person,” coach Lewis said. “We won meets that we never should have won because we were a team. One year, Northampton came into our pool, we just chipped away and chipped away and Gina Gallo, who wasn’t supposed to compete (in a particular event that day) ended up being the difference in the meet. We just have good athletes.”
Whether it has been Northampton, Minnechaug, Longmeadow, or East Longmeadow standing in their path, Westfield has always found a way to make their competition earn their spot at the top.
Friday’s meet was no different as the Westfield girls swim team turned back Amherst 109-73 while the Bombers boys slipped past the Hurricanes 93-76.
The girls were led by junior Kathryn O’Connor, who won both the 200 freestyle (2:12.59) and 500 freestyle (5:53.58) and was part of the winning 400 free relay team (4:06.04), also comprised of junior Emily Mihalek, senior Emily Langlois, and junior Alexa Richter.
Richter (50 free, 26.67), junior Jordan Bannish (diving, 197.85 points), and sophomore Ally Russell (100 free, 1:00.28) also posted first-place finishes.
Russell, who just recently signed a National Letter of Intent to attend St. Leo University in Florida, won the 50 free (22.23) and 100 free (51.37). He also teamed up with freshman Anton Bonacci, senior Jack Beaulieu, and Matt Morash for a winning time of 1:47.37 in the medley relay; and, Morash, freshman Jaden Noel, and Bonacci in the 200 free relay (1:38.52).
“That was a very fast time for early in the season,” coach Lewis said.
Beaulieu (100 backstroke, 1:05.23), Morash (100 breaststroke, 1:10.92), and Noel (200 free, 2:00.77) also won individual events.
No divers competed for either boys’ team.
Said coach Lewis: “It was a nice solid start for Westfield.”
Westfield next travels to Chicopee to take on the Chicopee Comp Colts Tues., Dec. 17 at 4 p.m.