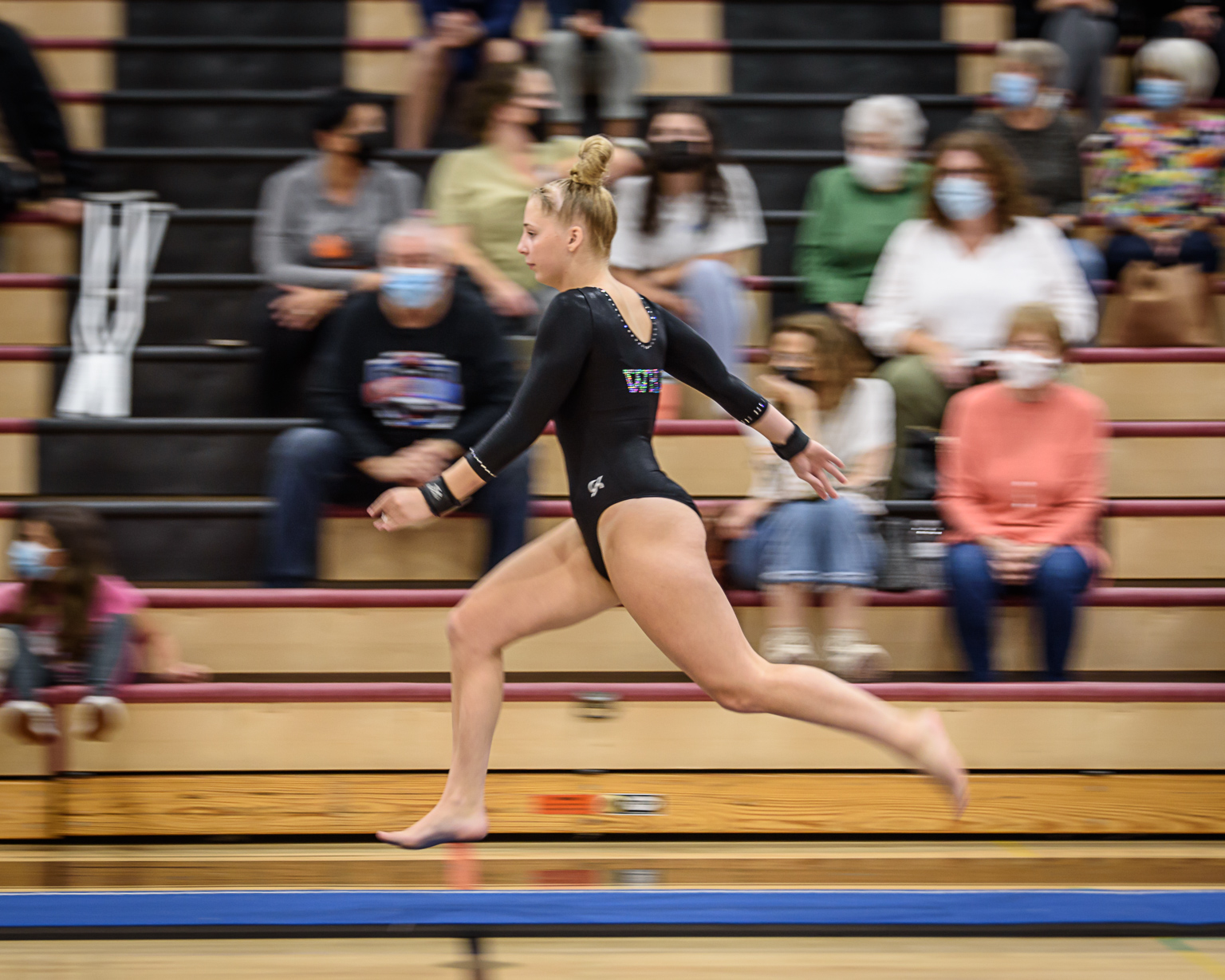 WESTFIELD – A new era for Westfield High School gymnastics began with some pomp and circumstance, and a sweeping victory.
Westfield opened the 2021 fall season with an impressive display of unity last Tuesday. The Bombers scored 132.15 points, defeating both the Minnechaug Falcons (128.50) and the Agawam Brownies (119.35). 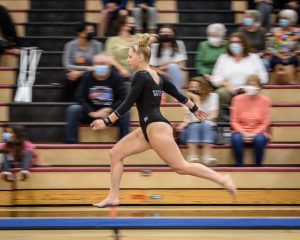 Westfield’s Kaela Johnson flies down the approach to her first vault of the evening in the season opener. (MARC ST.ONGE/THE WESTFIELD NEWS)

Westfield’s versatility was on display – – the Bombers claimed the top three all-around spots with senior captain Kaela Johnson leading the way. Johnson finished first with 34.10 points. Elizabeth Galczynski and Bella Goodreau placed second and third, respectively, with scores of 33.25 and 32.80.
“We have three really, really strong all-around girls,” Westfield first-year head coach Christina Pagella said. “These girls worked really hard over the summer, upgraded some of their skills. It’s nice to have three solid all-arounders who work hard and have fun at the same time. … Each one of them brings something different to the table.”
Johnson took first on the beam with (8.8), second on the floor exercise with (8.7), and tied for second on the uneven bars (8.2).
“Kaela is super consistent in all events,” coach Pagella said. “She is a fierce competitor [and] brings her ‘A’ game to every event.”
Galczynski finished third on the balance beam with a score of 8.4. “Lizzie’s floor and beam flawless performance is so pretty to watch,” Pagella said.
Goodreau, who drew praise from her coach as being a “strong, consistent bar girl” captured third with her floor routine (8.65).
There were other Westfield gymnasts who also garnered top three performances in the individual events, including Rylee Alteri, who tied Agawam’s Neve Mickiewicz for first on vault (8.65); Emery James, who tied for second on vault (8.55); and Sierra Borges, who tied for third on vault (8.5).
Minnechaug’s Megan Odell was tops on bars with an 8.5 and Agawam’s Mia DiLullo grabbed the top spot on floor (9.05). 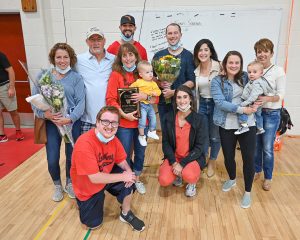 Retired WHS gymnastics coach Joanne Hewins, surrounded by family, was honored with flowers and a plaque at Tuesday’s meet for her 22 years of service with the school. (MARC ST.ONGE/THE WESTFIELD NEWS)

“We knew we had a good opportunity to score well coming in,” coach Pagella said. Pagella said although her team made a few mistakes, “we were mentally and physically prepared. It was really nice to watch and coach.”
Pagella’s sterling opening debut should come as no surprise. She is a former Westfield High gymnast, who also assisted longtime head coach Joanne Hewins. Hewins created a winning culture within the Bombers program for decades and was honored for those efforts Tuesday night after retirement this past offseason.
None of this is lost on the new head coach.
“I hope to bring my experience with some years in the sport as a team and as an individual,” coach Pagella said. “I want to carry on Joanne’s legacy. I definitely say I have some big shoes to fill but much of my coaching success is really from her guiding me. I think Joanne has prepared me well to succeed.”
Pagella and the Bombers will attempt to carry the good vibes into their next meet Oct. 6 at Agawam.
Westfield also has meets scheduled this season at Minnechaug (Oct. 13), at Hampshire (Oct. 21), vs. Chicopee Comp (Oct. 28) and at Chicopee Comp (Oct. 29).
Westfield High will host the Western Massachusetts West Sectionals championship Nov. 6.
“It’s a great start to the season, but obviously we have to build upon those scores,” coach Pagella said. “We are going to keep building upon our skills, perfecting our game, and getting points wherever we can.”