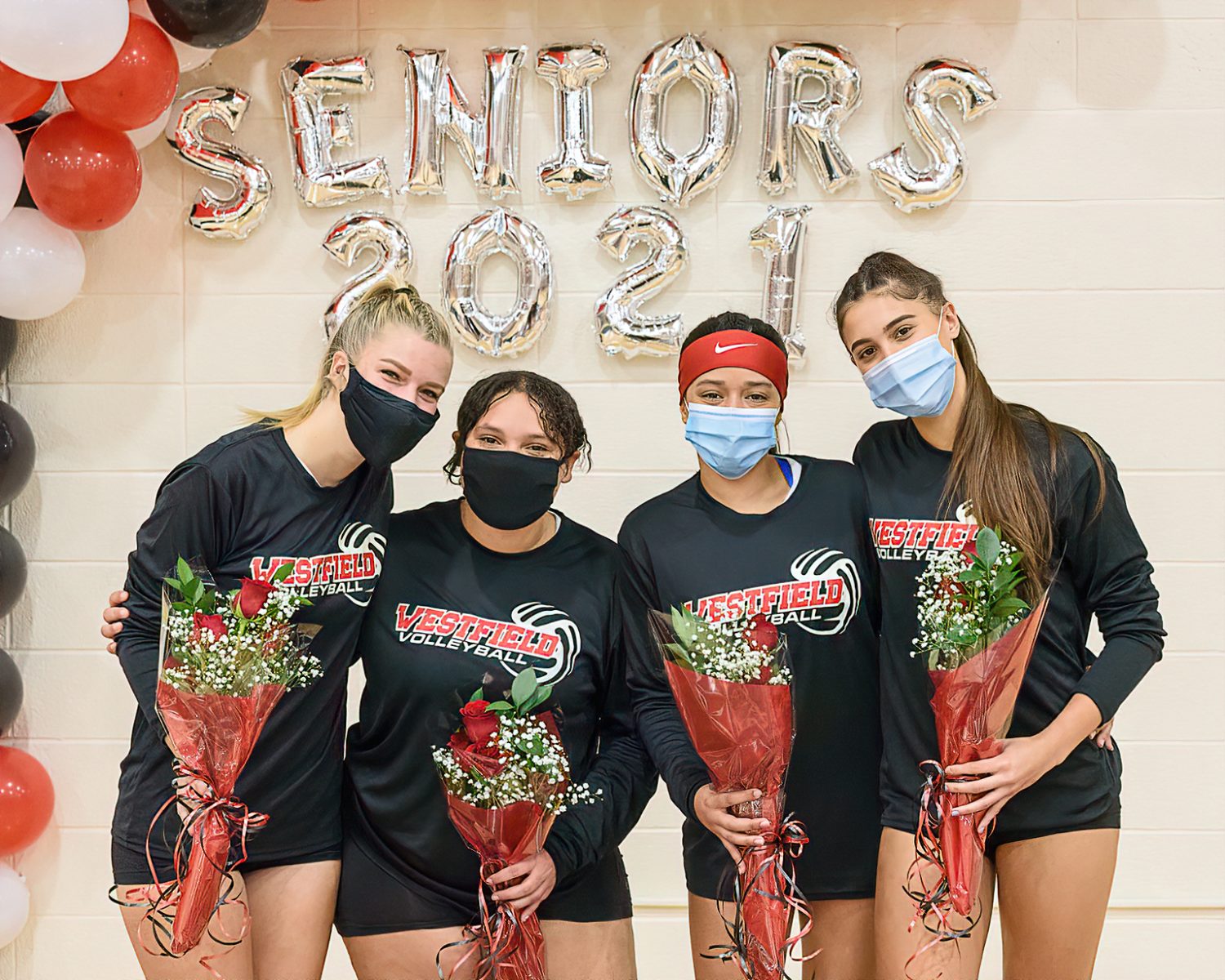 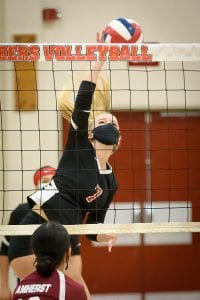 WESTFIELD – The Westfield High School girls volleyball team has overcome several obstacles this season, including COVID – – and seven opponents.
The Westfield Bombers dispatched their latest opponent, the Amherst Hurricanes, in four sets on a somewhat subdued “Senior Night” Wednesday in front of a sparse home crowd, 25-12, 25-7, 26-28, 25-16.
“Maybe we were feeling the good vibes of senior night, but honestly, that was some of the best volleyball we have played in a couple of years,” said Westfield girls volleyball coach Tyler Wingate.
Those are big words from a head coach that led his team out of obscurity and into the semifinals last season, as well as a championship appearance in 2018.
“That was top notch stuff in those first two sets,” he said.
Sparked by strong play from seniors Viktoria Pavlyuk and Irelis Rodriguez, Westfield posted a convincing 25-12 victory in the opening game. Then, in one of the most dominating sets recorded by any high school girls or boys volleyball team in some time, the Bombers opened up a commanding lead.
With Rodriguez serving to begin the second set, Westfield (7-0) reeled off 15 straight points. She landed an ace during the 15-0 run; Abigail Menzel (35 assists) and Emma Petzold converged for a nice block of Amherst; and Pavlyuk landed several kills with regularity.
“We were playing every ball aggressively with a lot of confidence and trust in our teammates,” said Pavlyuk, who finished with a total of 19 kills to go along with 15 digs.
As much disparity there was between Westfield and Amherst in the first two games, there was very little separation between the two teams in the third set. Both squads were playing in lockstep during the third game, so much so that they were tied 16 times. The Hurricanes squeaked it out, 28-26.
Up until that third game, Westfield had led every step of the way. 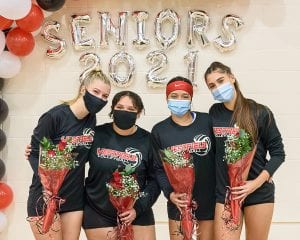 “(Amherst is) a dangerous team,” coach Wingate said. “We kind of played with fire a little. That third set was a little bit more of us getting in our own way.”
With Amherst’s spirits re-ignited, the Hurricanes played a close-knit fourth game early before getting burned late.
The final set was tied 2-2 and 6-6 before Westfield senior Raeana Edwards and the Bombers served up a 5-0 run to re-establish a more comfortable lead, 11-6. Still, Amherst battled back, pulling to within 15-14. With Pavlyuk serving – – she landed an ace – – the Bombers went on a 4-0 run to reclaim the upper hand, 19-14.
Westfield smelled victory. Rodriguez and Petzold smashed kills in the final minutes to close the door on Amherst. For Rodriguez, it was her 13th kill. Rodriguez and Pavlyuk combined for nine aces.
Rodriguez, who also finished with 13 digs, said the motivating factor is quite simple. “We really wanted this season,” she said. “We keep looking forward to keep on doing it.”
Pavlyuk echoed the sentiments of her teammate.
“We’re super thankful that we have a team this year and to be able to play,” Pavlyuk said. “Our coaches worked really hard to make this season happen. We’re just super thankful we get to play with such an amazing team of players this year.”
Wingate appeared just as appreciative as his players, following Wednesday night’s game.
“You value every day in the gym,” the Bombers head coach said. “You go out and give your best performance every match day. We’ve really been doing a really good job of that. This group has been extremely focused given the circumstances with everything that’s going on….We’re just trying to play really well on a given night.”

GIRLS SOCCER
Goodreau nets six points in Saints’ sixth straight win
St. Mary’s 7, Pioneer Valley Chinese Immersion Charter School 0
St. Mary’s stayed unbeaten, improving to 6-0 with a convincing shutout on “Senior Day.” Saints junior Ali Goodreau led the way offensively with a tremendous effort, scoring six points on four goals and two assists.
Freshman Emma Goodreau put home a goal and had two assists and fellow freshman Anna Puttick notched a goal and an assist. Getting in on the offensive fun as well were junior Anna Williams with a goal and senior Chloe Lussier and eighth grader Eliana Umana Kimura with one assist apiece.
St. Mary’s sophomore goalie Amelia Willenborg notched her sixth straight shutout with five saves.
“I was so happy the weather held up enough for us to have ‘Senior Night’ for Chloe Lussier and Paighton Ramos,” St. Mary’s girls soccer coach Patrick Olearcek said. “Each player has put so much hard work into the Lady Saints program for so many years (Chloe, 6 years; Paighton, 4) that we really wanted to show them how much they have meant to us. They are part of the foundation that has been built to make us a better all-around team, and a team that is competitive year in and year out. They are both wonderful young ladies whom we wish all the success in the world to and cannot thank them enough for all their contributions.”
Olearcek also noted the strong play up front from the Goodreau sisters, Williams, Puttick, Kimura, and Lussier, as well as the stout defensive effort from Ramos, Macy Woodger, and Willenborg.