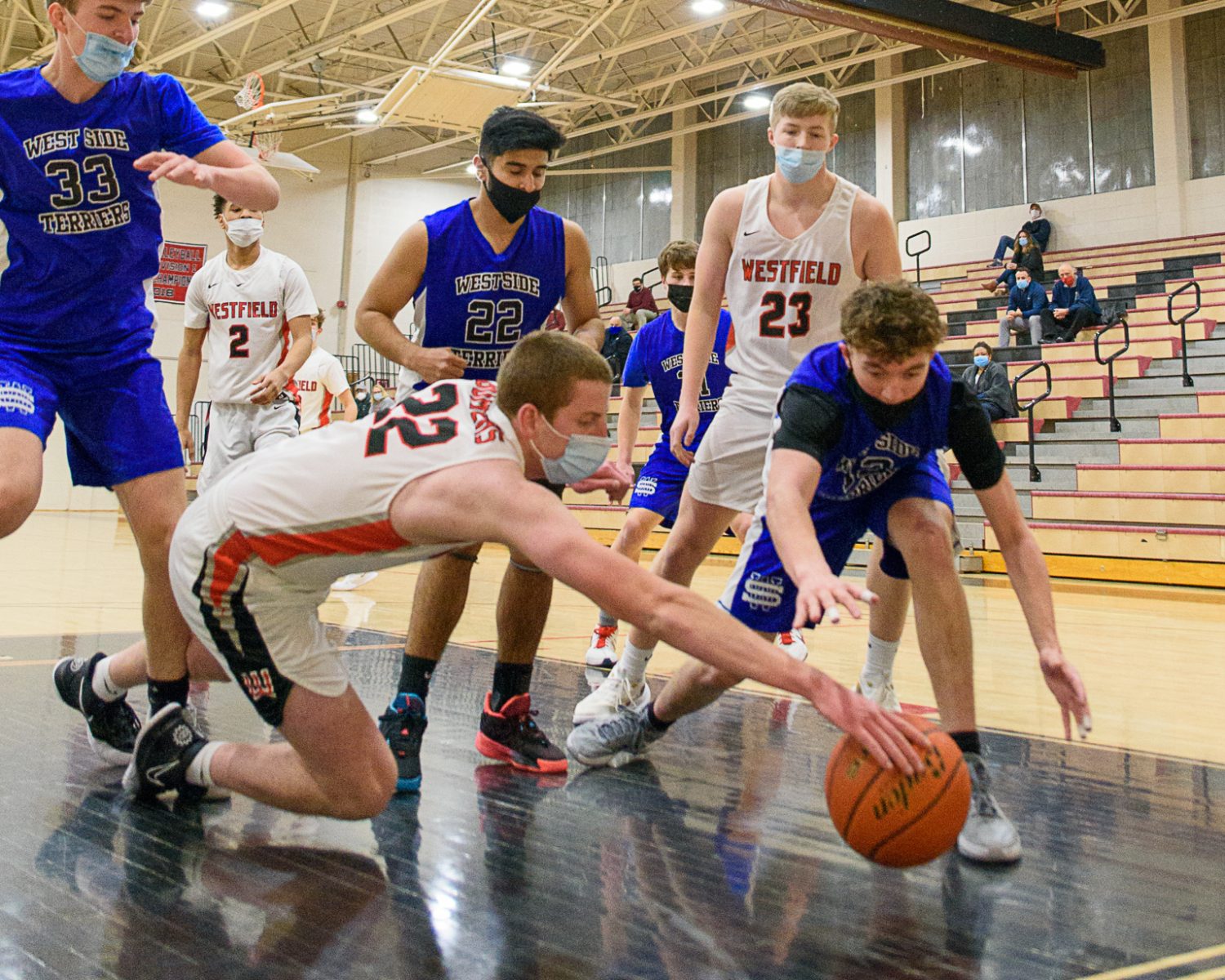 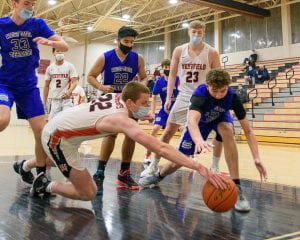 WESTFIELD – The coronavirus may have caused the world to come to a crawl, but the Westfield Bombers are soaring high atop the high school boys basketball bubble right now in Western Mass.
Westfield turned back West Springfield 50-37 Thursday night at Westfield High School to improve to 2-0. The Bombers broke through the teeth of the Terriers defense by attacking the rim with unparalleled ferocity.
“(Westfield) did a really good job of driving and dishing, getting in the lane and getting (the ball) up,” Westfield High School boys basketball coach Josh Balestracci said.
Nick Anciello (13 points) and Hunter Cain (10) combined for 23 of Westfield’s 50 points with several strong moves in the post.
“I thought Nick Anciello had a great game tonight,” coach Balestracci said. “He finished around the rim really well. I think Hunter Cain did a really good job being physical on the boards. He’s just an animal; he worked hard.”
Although the big men enjoyed a productive outing by night’s end, Westfield’s offense came out a bit slow from the start.
“I don’t think we did a good job matching our guys up,” Balestracci admitted. “I think we switched sometimes.”
Westfield fell behind by six points early in the first quarter, but Brian Strange bailed his team out with two consecutive 3-point shots to tie the game 8-all. West Springfield responded with a 3-pointer of its own, and then the Bombers offense went as frigid as the air outside the gymnasium walls.
Westfield went more than four minutes without scoring a single point. The Bombers trailed by five points before Cain stole the ball and dribbled the length of the court before laying it in to cut the deficit to 13-10 with 42 seconds remaining in the quarter. Cam Theriault closed out the quarter with a nice pull up shot in the lane, pulling Westfield within 13-11.
Fueled by six points from Anciello in the second quarter and a Jon Bulan 3-pointer with 4:40 on the clock, Westfield took a 23-16 lead. Strange followed with a couple of nice plays on both ends of the court, delivering a monstrous block on defense and skying high for an offensive rebound just moments later.
Still, West Springfield rallied in the final two minutes of the half, knotting the game at 24-24 with two quarters to go.
Both teams waged a tug-of-war early in the third quarter with neither side budging at all. Westfield went scoreless for three minutes, 30 seconds. Fortunately for the Bombers, their defense allowed just three points during that span of time.
Cain ended the scoring drought for Westfield 3:30 into the third quarter on a putback, pulling his team within one, 27-26. A three-pointer from Brennon Jarvis helped the Bombers regain the lead, 29-27.
Westfield continued to push the ball inside.
Cain scored with an aggressive move to the basket. David Tirrell hit back-to-back shots, scoring on a putback and knocking down an inside shot to give Westfield a 35-27 lead with just over two minutes left in the quarter.
A made 3-pointer by West Side briefly halted the run, but Cain went back into the paint for another basket just before the quarter ended.
“These kids worked really hard,” coach Balestracci said.
Westfield closed out the fourth quarter with some key buckets – – two low post shots from Anciello sandwiched around a sweet baseline drive dipsy-do for two from Jarvis – – and smothering defense.
“We just turned up the intensity on them,” Anciello said.
The Bombers head coach said that ultimately proved to be one of the decisive factors in determining the outcome of the game.
“Defensively,” Balestracci said, “I thought we gave a great effort.”
Westfield looks to defend its unbeaten 2-0 start against Pope Francis Mon., Feb. 1. Tip-off is at 7 p.m.