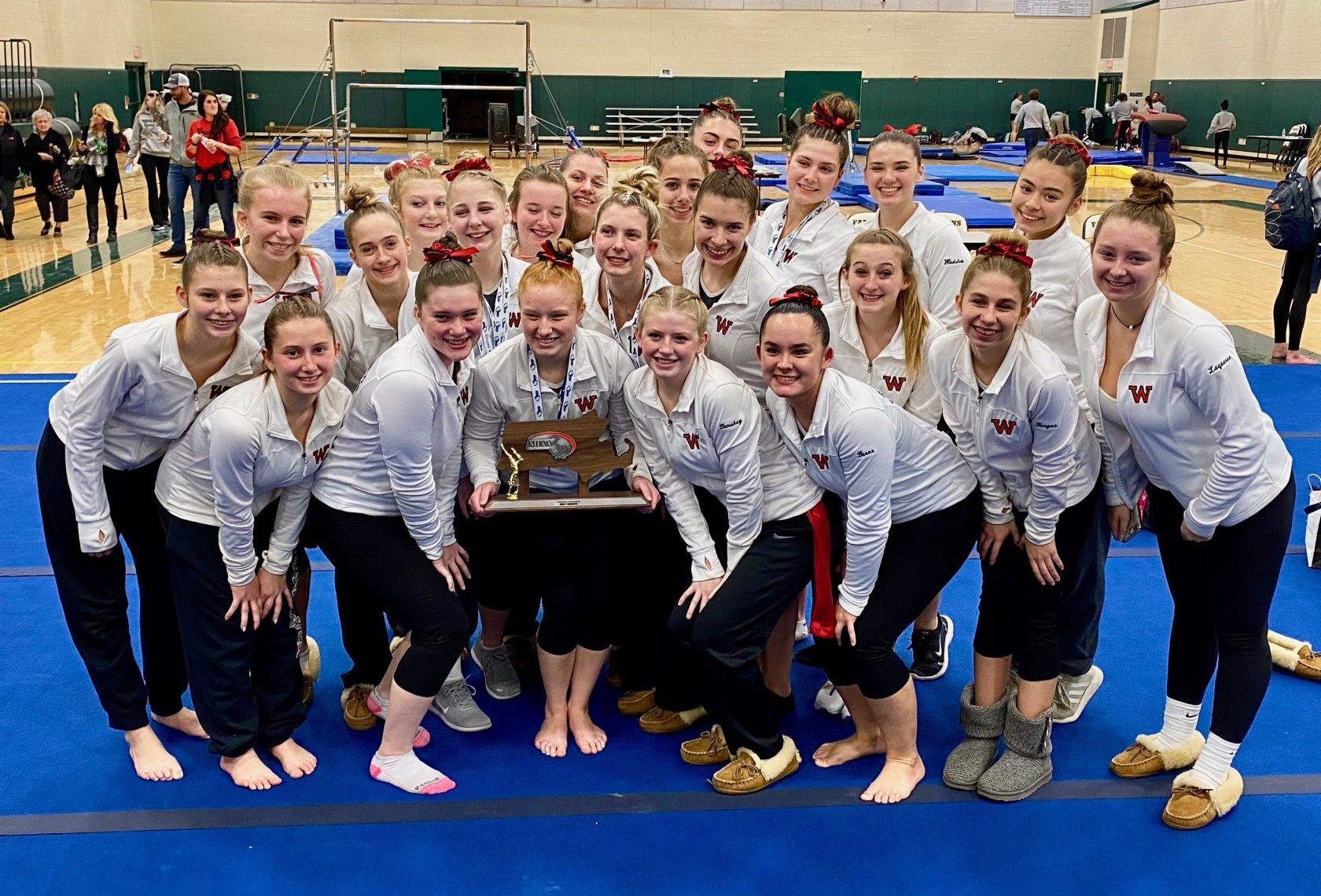 WILBRAHAM – Mission accomplished, sort of.
The Westfield High School gymnastics team’s return to the top of Western Massachusetts is nearly complete. The Bombers finished as runners-up with 133.70 points at Thursday night’s west sectional at Minnechaug Regional High School. Only the host Falcons were better with a team total of 137.6.
“Not back at the top but I thought they did an awesome job,” said longtime Westfield gymnastics head coach Joanne Hewins, who returned to coach the team this season following a brief absence from the sport.
Hampshire (127.825), Agawam (128.5), and Chicopee Comp (115.875) rounded out the field.
While Minnechaug produced three of the top four overall All-Around gymnasts – Kyla Miller (34.35) and Haylie Calver (34.1) finished 1-2; Samantha Druckenmiller was fourth (33.6) – two Westfield gymnasts cracked the top five. 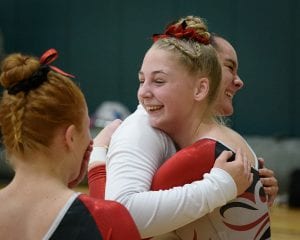 Westfield’s Kaela Johnson is congratulated by teammates after scoring a 9.0 on the balance beam during Thursday night’s West Sectional Gymnastics Championship at Minnechaug Regional High School in Wilbraham. (Photo by Marc St. Onge)

Westfield junior Kylie Liptak took home a bronze medal with a score of 33.9. Bombers’ Kaela Johnson placed fifth with a 33.2.
Liptak tied for fourth on the vault (8.3) and floor routine (8.85), finished alone in fourth on the balance beam (8.7), and just missed taking the podium again for the awards ceremony with a seventh-place finish on the uneven bars (8.05).
“We worked really hard as a team for the last month-and-a-half,” Liptak said. “It’s a tough loss, but I know in the future we’re going to get them.”
Liptak said Minnechaug presented a formidable challenge all season with a solid lineup of gymnasts. “They were just a couple steps ahead. Our biggest issue … came down to the little things.”
Still, there were several big moments for the red, white, and black.
Westfield’s Claire Smith owned the uneven bars, scoring an 8.9 to become the event champion. Johnson earned a 9.0 on the balance beam, second only to Miller (9.2). Smith also took the podium for the beam (6th place tie, 8.45); Johnson managed a sixth-place finish on the bars (8.1). Caitlin Daniels landed a sixth-place tie on the vault (8.2).
It was a bittersweet night for coach Hewins. Hewins, who is also an instructor and coach at Roots, coaches Minnechaug’s Miller, among other elite high school gymnasts, at the Westfield facility.
“I really enjoyed coming back because I really missed it after I left,” Hewins said. “It’s fun working with these kids. A lot of them I’ve been coaching since they were toddlers.”
The feeling is apparently mutual between coach Hewins and her gymnasts.
“I loved my old coaches for the (last) two years, but this year was good to have Joanne back,” Liptak said. “She adds a lot of background knowledge … a lot of motivation and pushes us to keep doing the best of our ability.”
Liptak said she is motivated for even greater success next season.
“I had a couple stumbles,” Liptak said, “but I’ll definitely be on top of my game more and be ready to hopefully come out on top senior year.”