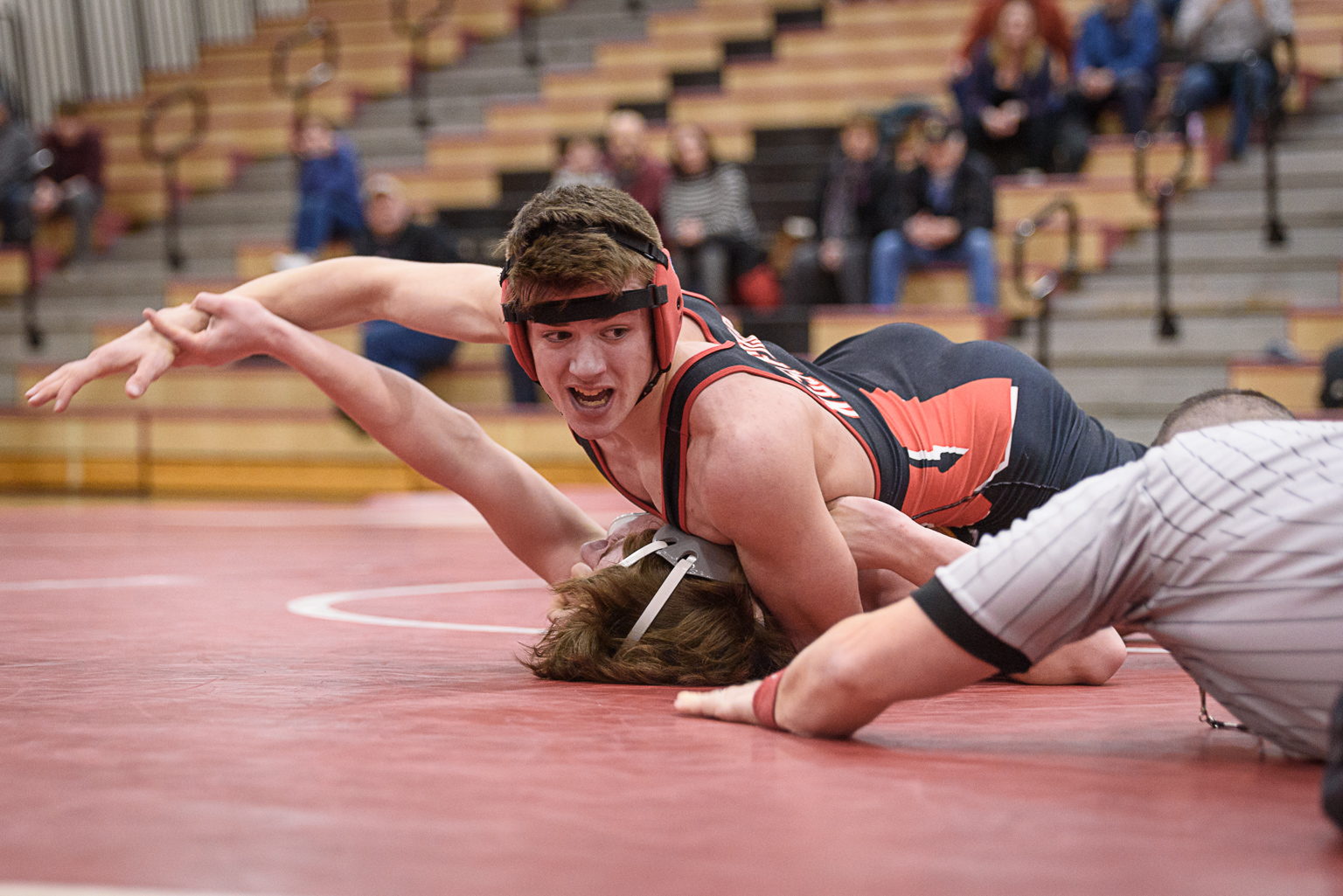 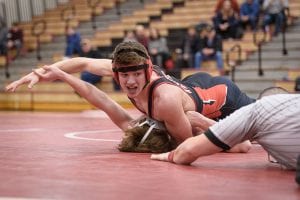 WESTFIELD – Earlier this season, Smith Vocational posted a convincing victory over the Westfield High School wrestling team 54-24. On Wednesday night, the Bombers narrowed that gap, falling just 42-30.
“This was a much closer match than the score indicates,” Westfield High School wrestling coach Chris Malinowski said.
Westfield senior captain Cam Foster (160 pounds) overcame a slow start to hit a fantastic hip over to pin a very tough Casey Baldwin with nine seconds remaining in the second period.
At 126 pounds, Westfield junior Zack Cernak overwhelmed Charlie Wintch with eight seconds left in the first period.
Westfield junior Chris Barber moved up to heavyweight to pin Joey Iamanna in 1:27 of the first period. At 132, Bombers freshman Anthony Gustafson had the highest scoring match of the night. Gustafson led 14-9 before falling to Abdullah Sheika. Sophomore Jackson Krause (182 pounds) moved up two weight classes and wrestled strong before falling to Smith Voke’s Zac Martinez. At 152, Nate Dinnie also moved up two weight classes and had a lead on Tyler Pratts before falling to the much larger wrestler.
“Our guys have continued to improve all year,” coach Malinowski said. “They made a match out of it tonight.”

Tues., Feb. 4
BOYS ICE HOCKEY
Bombers double up Brownies
Westfield 4, Agawam 2
Westfield skated out to a 3-0, first period lead and held off Agawam for a key victory at the Olympia Ice Center in West Springfield.
Brandon Shuman, Gavin Carzello, Peter Chrisanthopoulos, and Kevin Hosmer scored one goal apiece for Westfield. Bombers’ Matt Bacon had two assists. Daniel Buckalew, Carzello and Shuman each had one.
Westfield goalie C.J. Czarnecki finished with 22 saves.
“(Agawam) came out fired up, but we shut them down,” Westfield boys ice hockey coach C.B. “Moose” Matthews said. “The next two are just as big. …We’re still in the running. We can make the playoffs. We’re going to give it a good try.”
Westfield returns to action on “Senior Night” Friday against Grafton. The puck drops at Amelia Park Arena at 7.

GIRLS BASKETBALL
Indians turn back Rams
Ware 50, Southwick 34
Southwick battled Ware for much of Tuesday’s game, staying within 2 points of the Indians until the fourth quarter. The Rams fell to 2-13.

SKIING
Masciadrelli, Saints super on slopes
The St. Mary’s High School boys ski team won another division title, and will send four skiers to the state meet at Berkshire East. They won the overall five times in seven races.
Despite the challenging course due to tough conditions (warm temps, soft surface), Jack Masciadrelli added another overall and division win with the fastest run on the hill in the slalom.
“He didn’t overski the conditions and had great touch on the snow,” St. Mary’s ski coach Andy Lussier said of Masciadrelli. “He was fast across the top and clean on the steep.”
Collin Freeman had his best finish of the season, placing 8th overall and 4th in the division.
“(Collin has) been skiing well in practice and it was great to see him bring that same confidence into the race tonight,” coach Lussier said. “He really nailed his run tonight, skied at the next level.
Manny Umana Kimura had a big mishap but fought hard and finished 10th in the division and 27th overall.
Said coach Lussier: “He is why we won the division tonight and his perseverance paid off.”
Chloe Lussier paced the St. Mary’s girls ski team with a 9th overall finish (3rd division) in the Giant Slalom. Lussier will be going to states.
“It was a great run for her tonight,” coach Lussier said. “It was great to see her charge out of the start and attack the course.”
Elianna Umana Kimura continues to turn heads for St. Mary’s. Kimura finished 10th in the division, cracking the top 30 overall (23rd). She is also going to states.
“Our girls program is growing and they are improving their standing in the league,” coach Lussier said.
The St. Mary’s High School girls ski team had their highest finish ever in program history, placing fourth for the season.