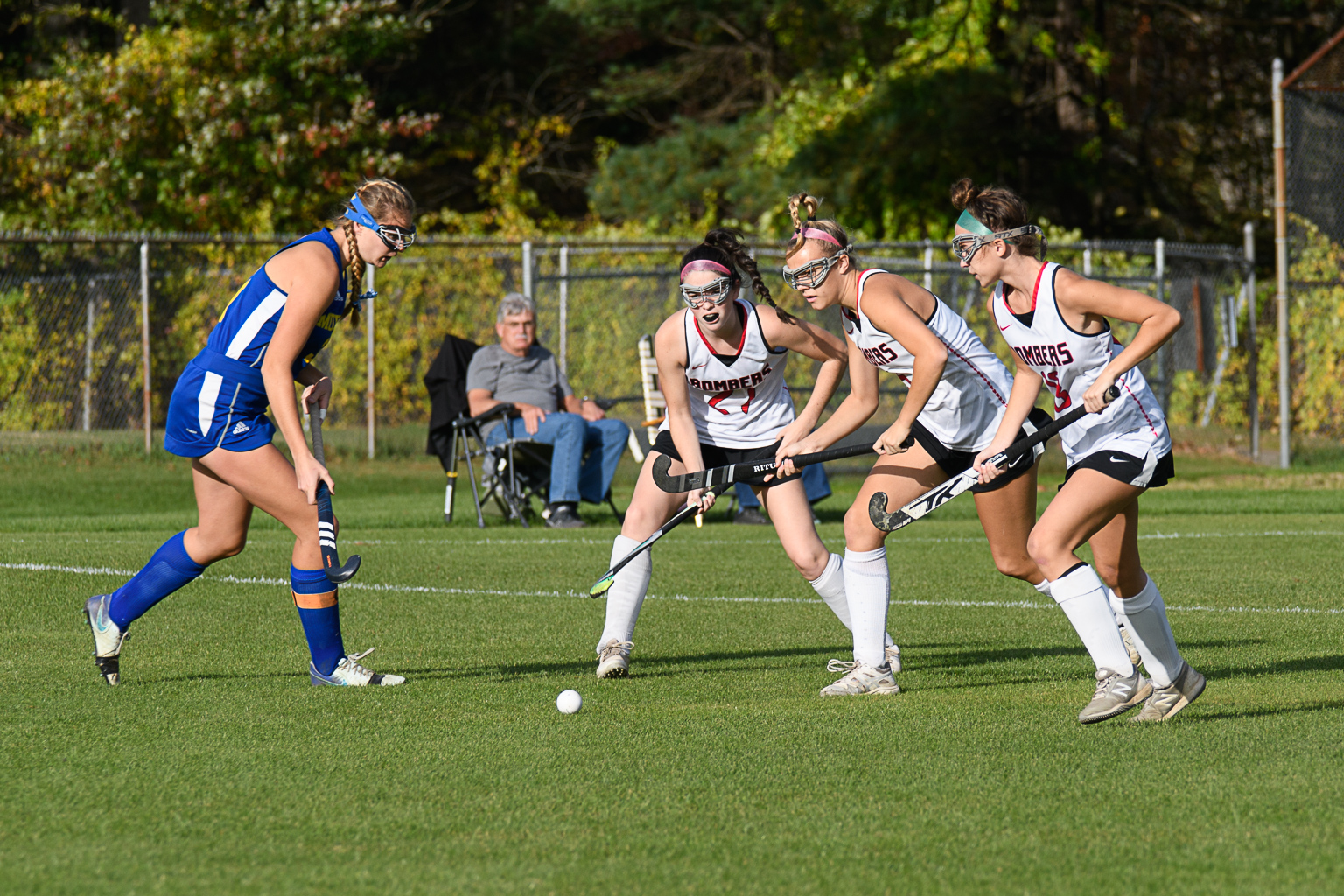 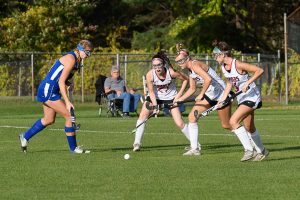 It’s three against one as Bombers move to control the ball. (MARC ST.ONGE/THE WESTFIELD NEWS)

SOUTH DEERFIELD – The Westfield High School field hockey team closed out the regular season with a win, and with it, a first place standing in the conference.
Four different players – – Gabi Ritter (2 goals), Norah Bargatti (goal, assist), Meghan Bowen (2 assists), and Rowan McDonald (2 assists) – – recorded two points apiece to lead Westfield past Mohawk in a rout, 6-1.
Westfield’s Jessica Isler, Lilly Taglieri, and Karlie Harlin each scored a goal. Bombers’ goalie Lindsey Brown made two saves.
“The pressure was on today needing the win but we stayed calm and composed and got the job done,” Westfield field hockey coach Courtney Albee said. “Mohawk put on the pressure, scoring early in the first quarter but we found our momentum and the goals kept coming. Now we look forward to Western Mass playoffs and state tournament.”

Green Wave washes over Rams
Greenfield 1, Southwick 0
Lilia Kachelmeyer scored with 1:04 remaining in the game to lift Greenfield past Southwick.
“(Our) defense put up a tough fight but Greenfield was able to slip it through,” Southwick field hockey coach Jenn Oakland said.
Southwick clinched a spot in the state tournament with a win over Northampton Wednesday. The Rams will now await the final state power rankings expected to be announced November 1. That is when they should find out whether they are ranked in the top 32 or have to play a “play-in” game.

BOYS SOCCER
Baillargeons carry Saints to victory
St. Mary’s 5, Franklin Tech 3
St. Mary’s capped off a spectacular 14-1-1 regular season with a solid victory. The Saint built a 4-0 lead behind four goals from Jonathan Baillargeon.
Franklin Tech rallied for three second half goals, two within a 60-second span. Baillargeon responded with a fifth goal for some insurance.
Trevor Corriveau had three assists, and Ben King had one.
St. Mary’s goalie Thomas Baillargeon made 14 saves, including a stop on a second half penalty kick.

Stryharz, Bulatov lift Tigers
Westfield Technical Academy 2, Hoosac Valley 0
Adam Strycharz assisted on a first half goal from David Bulatov and tallied an unassisted goal in the second half to silence Hoosac Valley.

GIRLS SOCCER
Tigers shut out Beavers
Westfield Technical Academy 2, Putnam 0
Westfeild Tech senior Mackenzie Chase had an unassisted goal on a loose ball in the box, following a corner kick. Shortly after scoring, Chase then assisted Rileigh Sagan by crossing a ball to center that Sagan was able to touch past the defense and when the Putnam keeper challenged her she put one in the net.
Westfield Tech’s defense limited Putnam to just one shot. Tigers goalie Lindsey Deland had one save.
Westfield Tech seniors Caitlen Carter, Katelynn Pellegrini, Megan Maloney, and Mackenzie Chase were each recognized for their contributions to the team. The Tigers finish the regular season 7-3-2.