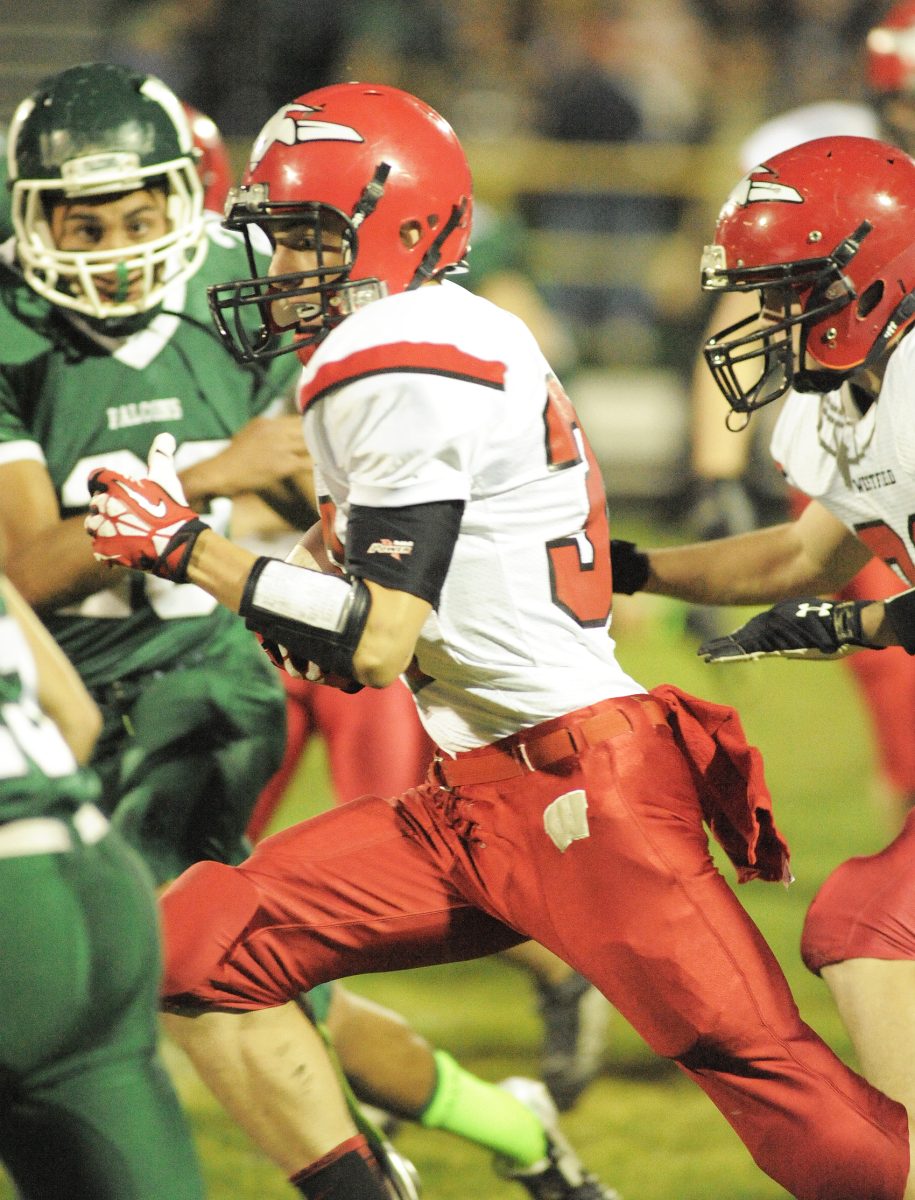 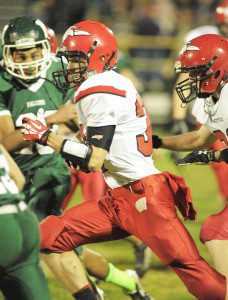 Westfield’s Cody Neidig carries past a wall of Minnechaug defenders during Friday night’s game at Falcon Field in Wilbraham. (Photo by Frederick Gore)

WILBRAHAM – The Westfield High School football team got a bit defensive against Minnechaug’s offensive threat.
Westfield clamped down on Minnechaug, forcing three key turnovers in a 13-6 win on the road Friday night. The Bombers picked off two passes, including one on a potential game-winning drive in the waning seconds, and stripped the Falcons of another TD in the first half.
Minnechaug (3-2) drove 55 yards in the game’s final minutes, but stalled in the red zone when Westfield linebacker Jordan Cree intercepted Falcons’ sophomore quarterback Kyle Trombley’s 10-yard pass in the end zone.
Westfield ran out the final seconds to secure the victory and a 4-0 start.
“Our defense kept coming up with big plays,” Westfield coach Bill Moore said. “It was a total team defensive effort. One guy after another guy made tackles and plays. The turnovers were the biggest.”
It was an old school, slug-it-out, tug-of-war for much of the game with Westfield chewing up yardage and time with its no-huddle, quick option ground game.
Westfield lit up the scoreboard first.
Cody Neidig plunged into the end zone from four yards out with 8:28 remaining in the first quarter. Neidig, also the team’s kicker, tacked on the extra point for a 7-0 lead.
Neidig proved to be a triple threat on the team’s opening series, returning the opening kickoff all the way to the Minnechaug 40-yard line.
Early in the second quarter, Trombley completed what appeared would be a long catch-and-run touchdown pass to junior wideout Josh Henry. But Westfield linebacker Garrett Fitzgerald tracked down Henry from behind and stripped the ball just before the goal line. The ball bounced out of the end zone, resulting in a touchback.
Minnechaug finally struck pay dirt midway through the third quarter.
After both teams exchanged series to begin the second half, Minnechaug drove 74 yards for a touchdown. Sophomore running back Shawn St. Marie sprang through the middle of the Westfield defense, bounced outside, and raced for a 29-yard score. The Falcons’ 2-point run failed.
Westfield wasted little time in regaining a one touchdown lead.
On its next offensive possession, Westfield drove 61 yards in a long, time-consuming drive that culminated in senior fullback Ben Geschwind’s 1-yard score with 47 ticks left in the third quarter. The extra point was blocked.
The Bombers converted two fourth down plays on the drive. Sophomore quarterback Jake Toomey converted a fourth-and-inches near midfield, and Neidig slipped a tackle and bounced outside for five yards on a fourth-and-4 from the Falcons’ 28.
In the fourth quarter, Toomey converted another fourth down play to extend a drive. Both offenses bogged down a bit before Minnechaug’s final drive. On the Falcons’ final play, Trombley sat in the pocket for about seven seconds before firing a pass into the end zone. Cree, who already had a first-quarter interception, picked up another by jumping in front of the intended receivers to secure the pick.
Notes: Moore said, while hard work and strong practices have helped fuel Westfield’s unbeaten start, the scout team has also been instrumental in the team’s learning process by helping to simulate the pace of game play in practice leading up to game day. “These kids don’t see a lot of the Friday night lights,” the Bombers coach explained, “but they’re huge.”