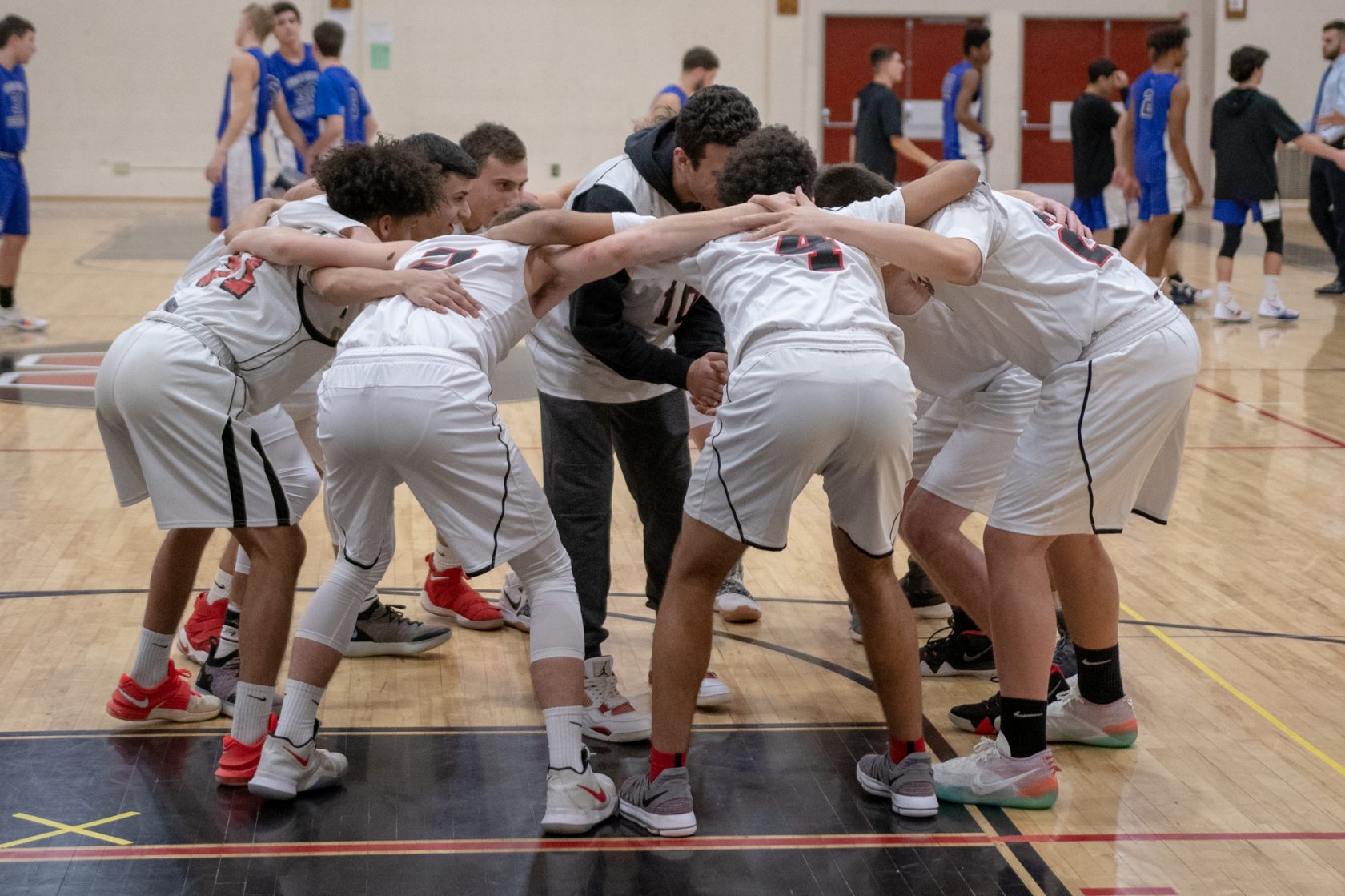 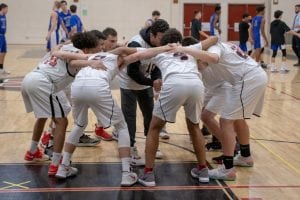 The Westfield Bombers, pictured here against West Springfield on Dec. 11, finally broke through in the win column Thursday night at Amherst. (File photo by Bill Deren)

AMHERST – New Year, new results.
The frenzied crowd and a potential road block could not rattle the Westfield High School boys basketball team as the visiting Bombers recorded their first win of the 2018-19 season with a 54-46 victory over the Amherst Hurricanes Thursday night.
“I was really proud of the kids,” Westfield coach Josh Balestracci said. “You can tell they’re growing.”
Westfield (1-6) played phenomenal defense in the first half, limiting Amherst to just 18 points. The Bombers stumbled a bit in the third quarter as Amherst rallied from a double-digit deficit to take an early fourth quarter lead.
Westfield would have none of that though. The Bombers wrestled back the lead, making key baskets and sinking free throws down the stretch.
“They came through tonight,” coach Balestracci said of his players. “Hopefully we can build off of it.”
Tony Torres led Westfield with 15 points. Bombers’ Riley Coughlin finished with 14 and had several rebounds. Jaylen Moore scored 13.
Will Cameron and C.J. Flores provided solid defense and rebounded the ball well for Westfield.
Amherst’s Evan Perry scored a game-high 20.

Indians push back Rams
Ware 81, Southwick 52
WARE – Ware withstood a strong push by Southwick, but turned back the visiting Rams.
Southwick rallied from a first-half deficit, whittling away with hard-nosed, inspired play. The Rams managed to seize a slim lead in the second quarter, but the opposition were gathering up a viscous response.
Ware (6-1) put together a double-digit lead in the third. Southwick still managed to cut its deficit nearly in half, but the Indians pulled away in the fourth.
“Our defense was great in the first half,” Southwick coach Peter Fiorentino said. “We had some good shots, stops and rebounds. We didn’t play very good defense (in the second half). They’re good and they took advantage of that.”
Ware’s Devin Slattery led all scorers with 33 points. He made six 3-pointers. Keith Smith and Collin Doty chipped in 13 and 12, respectively, for the Indians.
Dan Scharmann (14 points), Connor Roy (13), and Devin Parrow (12) led Southwick, which fell to 4-3.

Tikonchuk, Tigers down Gators
Westfield Tech 57, Gateway 40
Dave Tikhonchuk scored a game-high 28 points, and Westfield Tech upended host Gateway. Tigers’ Josh Bush had 12.
“It was a nice win because we took care of the ball,” Westfield Tech coach Kyle Dulude said. “(There were) not many reckless turnovers and … everyone played scrappy.”
Santiago Lopez led Gateway with 10 points. Gators’ Evan Cortis and Dylan Lafreniere each had seven.

WRESTLING
Bombers throttle Spartans
Westfield 71, East Longmeadow 6
Westfield improved to 5-1 overall, 3-0 in dominating fashion on its home mat.
It all started with senior captains Ed Borodin (126 pounds) and Ed Towers (138). Borodin used an array of tilts to build a large early lead against Connor McCarthy en route to a technical fall win, 16-0. Towers built a 14-0 advantage before pinning Jack Learnd in the second period.
At 132, Westfield senior Mike Minchala swarmed East Longmeadow’s Jake McCarthy, winning by pin in 1:08. At 152, Bombers junior Nick Clauson built a 7-0 lead, and won by injury default when Spartans’ Adam McCarthy was unable to continue. At 182, Carlito Serrano continued to impress as he was all over Mitch Aarons early, winning by pin in 1:11.
Westfield’s Cam Foster wrestled up a weight class and wrestled well before falling to Austin Cypher. Freshman Peyton Bates (195 pounds) had an impressive showing for the Bombers, grinding out a third period pin.
Westfield next wrestles Northampton Wednesday at 6 p.m.