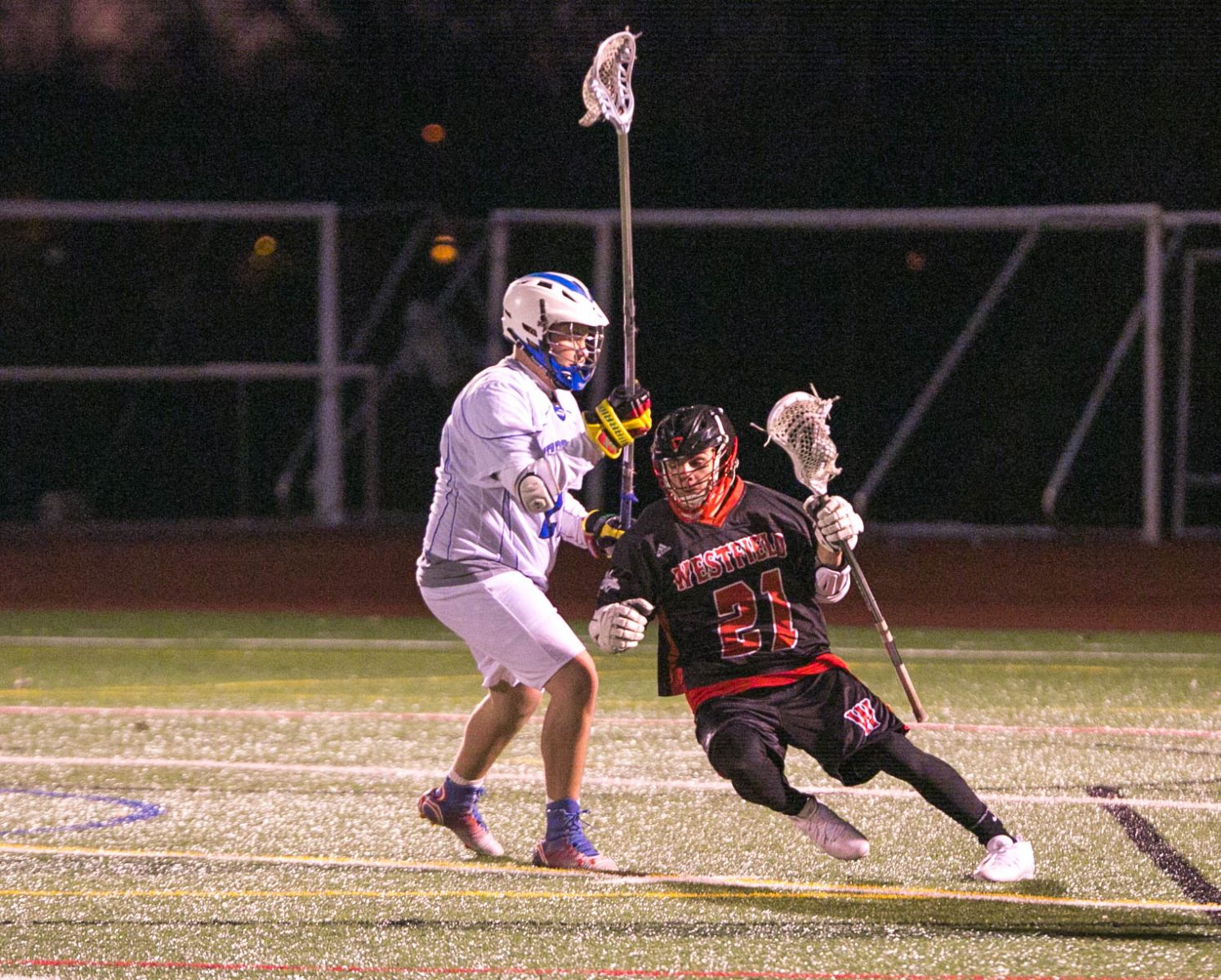 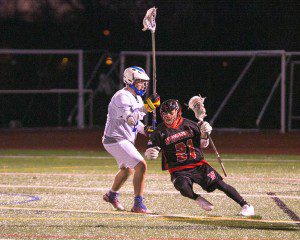 Westfield’s Sam Scarfo makes a move against a West Side long pole defender, and makes a drive to the net. (Photo by Liam Sheehan)

WEST SPRINGFIELD – They’re baa-aack!
If anyone thought that the Westfield High School boys’ lacrosse team would get complacent after upending Longmeadow and forging one of its deepest tournament runs in school history, they were dead wrong.
Westfield got right back to punishing opponents, dispatching West Springfield 14-6 in a season opener Tuesday night at West Side. The Bombers scored the first 14 goals of the game, including six in each of the first two quarters to effectively end the competition early.
Mercy-rule running time began late in the first half.
“Everyone kept their heads up, working hard to get open, said Westfield’s Sam Scarfo, who led the team with four goals and two assists. “Everyone just found the right guy.”
Craig Ward spotted Matt Chlastawa splitting the defense through the center lane, connecting on a laser feed. Chlastawa corralled the laser feed a few feet in front of the West Springfield net and scored 11 seconds into the game. 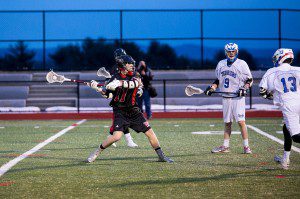 Junior Anthony Sullivan winds up for a Westfield shot on Tuesday night at West Springfield. (Photo by Liam Sheehan)

It was a harbinger of things to come.
Scarfo collected a rebound, and scored the team’s second goal 2:15 into the opening quarter. About 90 seconds later, Mason Balch made it 3-0. Scarfo tallied the fourth goal 21 ticks after that. Chris Gentle’s successful slingshot effort from about 20 yards out midway through the quarter brought the score to 5-0.
Over the course of the next few minutes, West Springfield attempted to slow down the Westfield offense by setting up a few plays of its own. The Bombers’ defense held serve – even during a 30-second spurt with a man down due to penalty – keeping the Terriers 20 to 40 yards away from the net most of the time.
When Westfield recaptured the ball, Craig Ward scored in the final two minutes of the half for a 6-0 advantage.
There was no let up in Westfield’s offensive attack.
One minute, eight seconds into the second quarter, Gentle fired a shot into the back of the net from about 20 yards out for a 7-0 lead. Two minutes later, Scarfo came around the back of the net and squeezed a goal through the West Springfield defense.
The floodgates opened. 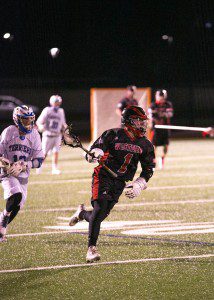 Westfield continued to pepper the West Side net, scoring four more goals before the end of the first half – two from Chlastawa and one each from Balch and Scarfo. Another goal from Gentle and one from Jeff Bourgoin signaled the end of the day for several of the team’s starters.
Drew Rossman scored five of West Springfield’s six goals during garbage time in the closing eight minutes, 25 seconds.
Westfield goalie Jake Cupak recorded a shutout in net. He finished with 33 saves.
“It was nice to finally get out here,” said Westfield coach Mark Cavalon, whose team struggled to practice with Old Man Winter still clinging to life in much of the region.
The Bombers did manage to scrimmage some tough opponents in the preseason, and on Tuesday, it showed.
“We moved the ball pretty well,” Cavalon said.
If Mother Nature cooperates and field conditions improve, Westfield will return to action next Tuesday in its home opener against Amherst. The game will begin at 4 p.m.