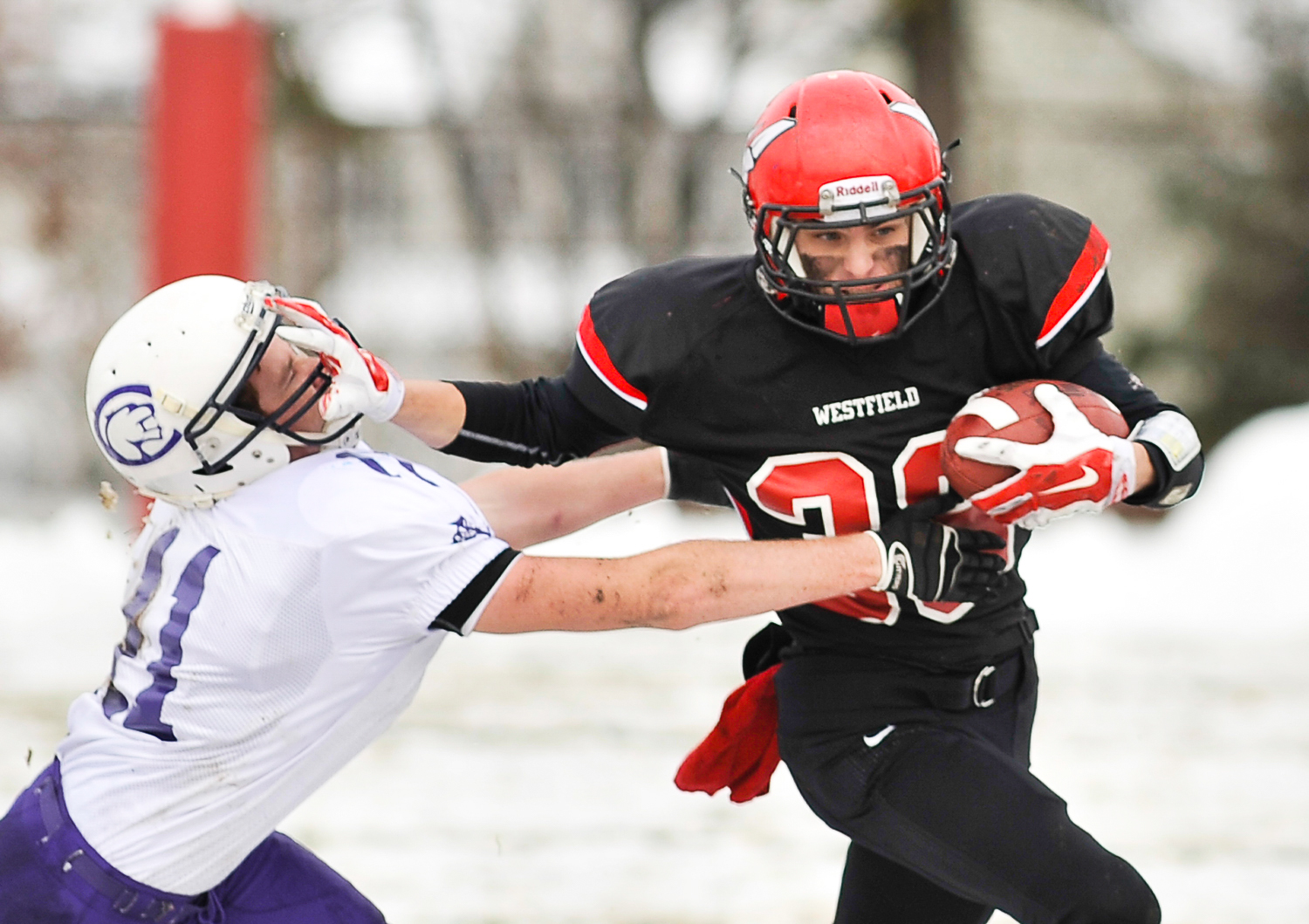 WESTFIELD – It has been a season marred by injuries, and littered with losses. But a win on Thanksgiving Day could go a long way in taking the bad taste out of the mouth of the Bombers football team.
“We’ve had a quite a bit of adversity and dealt with injuries,” said Westfield High football coach Robert Parent, whose team lost eight straight games to open the 2015 season. “It limited what our progression could have been.”
In its season opener, Westfield rallied from a two-touchdown deficit, only to lose by three points in a barnburner on the road against defending Division 5 Super Bowl champion Abbington , 42-39.
Westfield lost its starting quarterback, junior Austin St. Pierre, to injury late in that game. Backup quarterback Scott Walsh’s one-yard touchdown plunge put the Bombers ahead with 4:31 remaining in the fourth quarter. Abbington responded with a four-play, 57-yard drive that culminated with senior Brendan Glavin’s third TD of the game, a 14-yard scamper. On the next drive, the Green Wave forced four straight incompletions to halt the Bombers’ comeback, ending the game.
Over the course of the next seven games, St. Pierre and several other Westfield players limped in and out of the lineup. Seven of the eight Bombers’ seniors missed at least one game this season.
Although Westfield failed to produce a win in any of those contests, they continued to approach the edge of victory with more resolve each time. With a healthier St. Pierre, and a resurgent running game, the Bombers finally broke through in the win column.
Westfield won its last two games soundly.
“We have put a better product on the field week in and week out,” coach Parent said. “Our younger guys have gained valuable experience while we have gotten some key guys back from injury. It’s good timing. We’ve also been playing more inspired football.”
Westfield now looks to close out the season on a three-game win streak with a win against Cathedral on Thanksgiving Day.
“We would like to send our limited seniors out the right way and end our season properly,” coach Parent said. “I hope our guys show up and execute our game plan efficiently.”
“Westfield has delivered overwhelming results in the annual turkey day classic throughout the past decade. 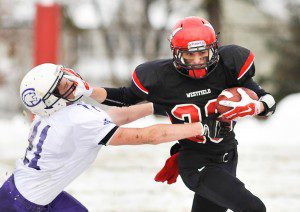 Westfield running back Cody Neidig stiff arms a Cathedral defensive player while carrying the ball during the 2014 Thanksgiving Day football game at Bullens Field. The Bombers stuffed the Panthers, 48-0. With Neidig and others having graduated last spring, it is time for a new hero to emerge in this year’s annual turkey day classic. The two teams kick off Thursday at Central High School at 10:30 a.m. (File Photo by Fred Gore)

The Bombers have won each of the last eight meetings with Cathedral, and 13 of the last 14 contests in a series that dates back to 1943.
Westfield is 43-28 over the lifetime of the series, and has dominated the last eight contests, outscoring Cathedral 312-72. Four of those victories were shutouts, including last year’s 48-0 thrashing of the Panthers.
While it has been one of total domination recently, statistics mean very little when the two teams step on the field together for, quite possibly, the last time.
“This is a rivalry game – records don’t matter,” coach Parent said. “Your (opponent) can be winless, and next thing you know it’s a loss on your end … When I was in high school, you could win a championship but if you lost on Thanksgiving the season was a failure.”
This belief has been passed on to the senior class.
“Anybody can win this game,” Westfield senior wide receiver/defensive back Dylan Wainscott said. “They want to go out with a boom.”
Cathedral, who opened the season with a two-game win streak, has lost seven straight. The Panthers lost by less than a touchdown though in four of those games.
“Cathedral is a good team,” Westfield senior lineman Matthews Reynolds said. “We can’t take them lightly. We need to play our best.”
Said Parent: “The tradition throughout the country from the NFL (National Football League) all the way to high school football … is like a playoff atmosphere … The team you have a history with is good and bad. The two teams know each other well … It is a championship game.”
It appears it might be even much more than that.
Much uncertainty surrounds the future of this annual game following the recent announcement that Cathedral and Holyoke Catholic high schools will merge together to form a new school, Pope Francis High, in 2016.
It is likely that this is not only the final game for the seniors, but all involved.
“I do not know what the future holds,” Cathedral High School athletic director Joseph Hegarty said. “It is a big decision on whether to have a Pope Francis football team. With the number of participants we have had in the last few years, I see it is very unlikely to be able to continue the program, especially facing the cost of outfitting a new team with uniforms and helmets.”
Cathedral football has struggled to put a team on the field for the last five years. The Panthers entered into a cooperative program with Holyoke Catholic and Sabis to keep the program afloat during that time period.
“Our numbers are very low,” Hegarty said, “but the kids have players hard this year.”
Facing rising costs, declining enrollment numbers, and a school ravaged by a tornado in June 2011, the Catholic diocese recently decided to end the school’s existence as it is now known.
“I am really excited for this game, regardless of the outcome, as it will be a great send-off to our beloved school,” Hegarty said. “There are 20,000-plus alumni who have fond memories of this school and this Thursday will be the last of those great Cathedral memories.”
Westfield-Cathedral kicks off at Central High School in Springfield, beginning at 10:30 a.m.