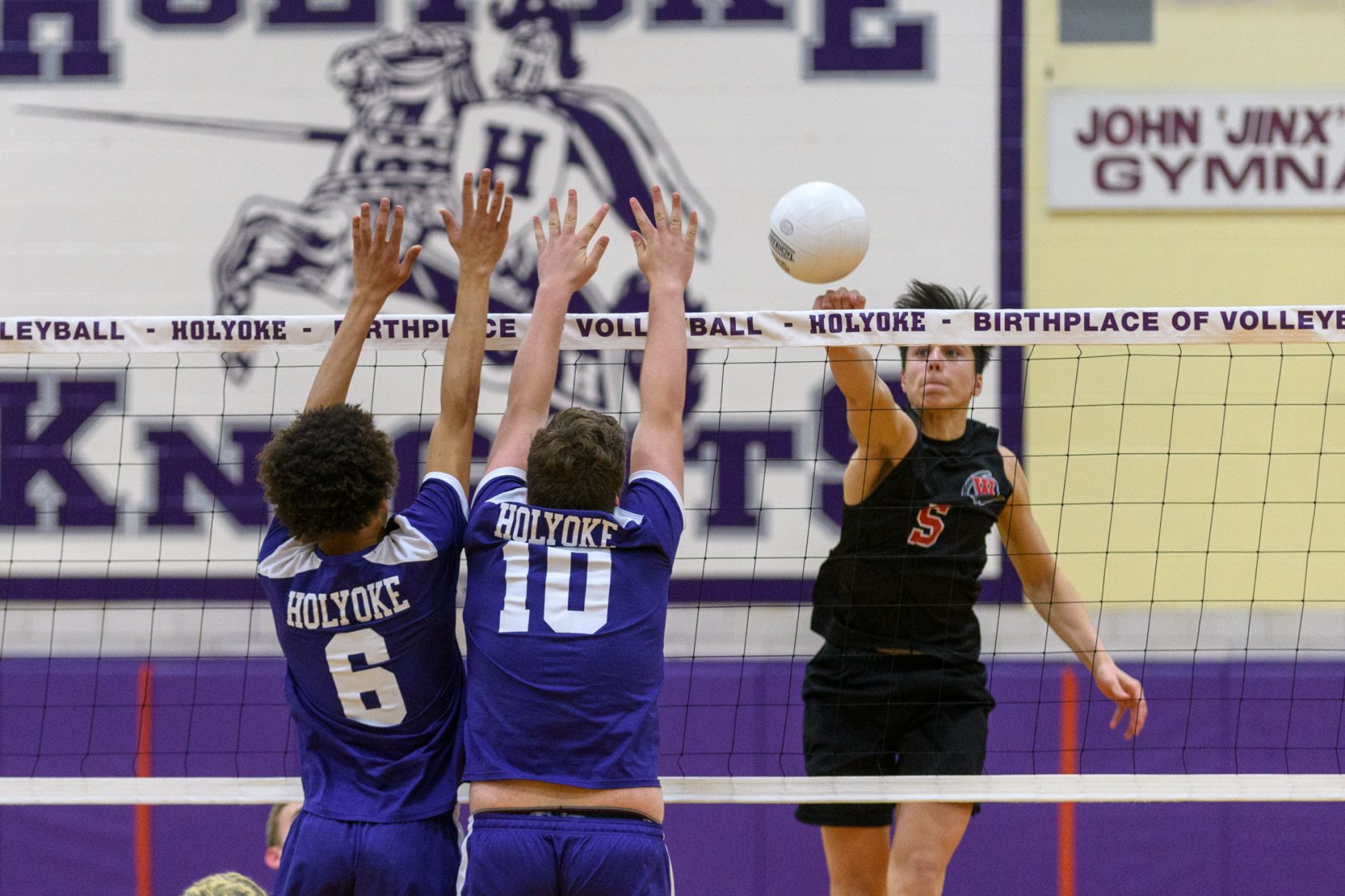 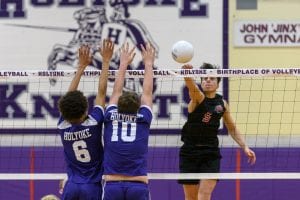 WESTFIELD – While the rest of the world began flocking to movie theaters to see Avengers: Endgame Friday, the Westfield Bombers were just completing Phase One of their game plan to three-peat as boys volleyball state champions.
Westfield rang up their 10th win of the season, officially punching their ticket to the postseason with a rather convincing sweep of Holyoke 25-12, 25-7, 26-24.
“To be 11 games in to be 10-1, we feel good about the record but we have high expectations,” Westfield boys volleyball head coach Tyler Wingate said. “You never take anything for granted. We don’t necessarily set goals at the beginning of the season. Its’s just something we can feel good about and know it’s taken a lot to get up until this point. The second half of our schedule … is going to test us. I hope it prepares us well for the postseason.”
The match against Holyoke began like it has for much of the season – with Westfield dominating play.
Westfield cruised to an easy victory in the first set, a set that saw James Pavlyuk (5 kills, 5 digs, 6 aces) reel off nearly a half-dozen points with strong serves and solid play by his teammates in front of him.
The second set was a thing of beauty.
Early in the middle frame, Pavlyuk skied high to launch a thundering kill that echoed throughout the gymnasium louder than the thunder outside. Ethan Flaherty soon matched the intensity with two emphatic kills. He finished with five.
The only thing that appeared to stop Westfield was themselves like on a service error following an 8-0 run for a 13-4 lead, or a botched rally. Riley Coughlin fueled another strong run with a block and an ace. R.J. Piper landed a kill. A few points later, the Bombers enjoyed a 25-7 win.
In the final set, Westfield built a commanding 20-9 advantage before making some lineup adjustments to get some reserves additional playing time.
“We have to be composed, work hard, and do our thing,” Pavlyuk said. “We’re just training hard during practice. …We need to stay humble and work hard.”
Eric Yurtuc contributed 22 assists and one block for Westfield. Bombers’ Ryan Rix collected five kills, four aces, and a block; Mike Bowen landed seven digs.

GIRLS LACROSSE
Shrewsbury storms past WHS
Shrewsbury 14, Westfield 5
Lara Finnie notched two goals and one goal to lead Westfield. Bombers’ Kylie Buchanan, Mackenzie Kiltonic and Olivia Hadla each also scored a goal.
Westfield goalie Liz Clarke finished with 14 saves.
The game was delayed briefly due to a tornado warning with both teams sheltered in the school building in Shrewsbury. When the game finally resumed, it was played in wet conditions.
“It was an adventure we won’t soon forget,” Westfield coach Paul Fenwick said.
Westfield next returns to action Tuesday in a showdown with Granby (7-1) at Roots Athletic Center. Game time is 4 p.m.