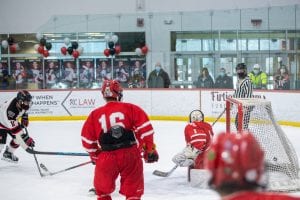 Going down the slot, Westfield’s Ethan Clarke (11) blasted the puck past the East Longmeadow goalie for the game-winning goal. (BILL DEREN PHOTO)

WESTFIELD – Westfield’s Ethan Clarke scored an eventual game-winning goal late in the second period and the Bombers held off a scrappy East Longmeadow High School boys ice hockey team, 2-1, on “Senior Night” Monday at Amelia Park Arena.
Dan Bennett skated deep into the offensive zone on the right wing in the middle frame before delivering a pass to Clarke out in front of the right side of the East Longmeadow. Clarke beat his defender to the puck, and slipped it past the goalie just inside the right post with 54.5 seconds remaining.
“I think (East Longmeadow) came to play,” Westfield boys ice hockey first-year head coach Dave Pelletier said. “They’re young but they have good hockey sense and they’re obviously well-coached. …I’m not sure the better team won today.”
It was a tightly contested battle for most of the game – – maybe even more so than Bombers’ fans are accustomed to.
“I don’t think we played traditional Bomber hockey,” coach Pelletier said. “We kind of came out flat. It just took us awhile to get things going and even when we got them going we just couldn’t find the net.”
Westfield wasted very little time finding the back of the net in the early moments. The Bombers scored 1:21 into the opening period when Matt Kotfila took a pass from Kevin Hosmer and hammered home a goal.
East Longmeadow scraped together a goal of its own from Luke Haynes with 7:39 remaining in the period. The game was knotted 1-all until Clarke’s heroics.
Westfield goalie C.J. Czarnecki and the Bombers’ defense held off East Longmeadow’s final offensive push in the last minute of the third period with the Spartans goalie pulled. C.J. Kolodziey ripped off a slapshot from just inside the blue line in the waning seconds, but Czarnecki slid his leg pad in front of the shot to deflect the puck away.
“It might be senior night, the emotions, the end of the road coming quick … but we did not go out in style.”
Czarnecki and fellow seniors Sean Rowbotham, Alex Maggipinto, Garrett Bacon, Jason Rokosz, Matt McMahon, Mike Antonellis, Joe Taupier, Aidan Fitzgerald, and Connor Fitzgerald were honored in a brief ceremony before Monday’s contest.
As for the seniors’ moments in the midst of a pandemic, coach Pelletier said: “We did things a lot different this year knowing that we wanted to give the seniors the best experience possible. Knowing that for lack of better terms, we are skating on thin ice, tomorrow might not come so take advantage of every practice, every game, make it the best experience you can because you just don’t know it’s going to be there tomorrow. For them, it’s bittersweet.”