The girls are off and running at Tuesday’s high school cross country meet between Westfield and Amherst at Stanley Park. (Submitted photo)

WESTFIELD – Westfield High School hosted 2014 Western Mass cross country runner-up Amherst Pelham Regional High School at Stanley Park on Tuesday. The meet was also the inaugural developmental outing for Westfield Technical Academy under Coach Ralph Figy.
The Westfield girls’ team came out on top, 25-30, against Amherst for its first win since moving to the Pioneer Valley’s most elite division in 2012. The Bombers were coming off a loss to 2014 WM Champs Northampton last week and were seeking faster times and a good showing on their home course against the Hurricanes.
What Westfield delivered was far beyond what most expected.
Amherst’s Sophia Jacobs-Townsley (20:56) inched ahead of second place teammate Lydia Sawyer (20:57). Westfield’s Sophie Gronbeck followed in a close third with a personal best (21:10).
The excitement came in the form of a loose pack of girls that followed a minute behind and would decide the meet. The Bomber girls rose to the challenge and finished strong with black and red shirts taking fourth through seventh, with an all out sprint to the finish by rookie sophomore Mia McDonald (22:03), senior captain Carley Censabella (personal best 22:07), senior captain Madison Eline (22:30), and rookie junior Libby Irwin (22:22), to secure the victory.
Amherst’s Neosha Narayanan (22:25), Hannah Lebowitz (22:25), and Ariel Christy (22:34) rounded out the top 10 scoring positions.
Other noteworthy performances from Westfield included: rookie sophomores Mary Philpot (23:57) and Shyanne Jones (24:52), freshman standout Clara Hinck (23:09), and personal best times by juniors Victoria Sardinha (24:13) and Ally Davis (25:21).
WTA’s Joselyn Rodriguez (43:59), Paulina Ubanek (45:29) and Brittany Fountain (45:30) set a fine mark for their team’s debut outing. – Courtesy of Mike Rowbotham 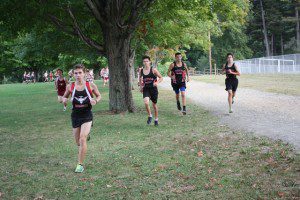 BOYS’ CROSS COUNTRY
Bombers’ new journey continues
Westfield kept pace with a skilled Amherst team during Tuesday’s meet at Stanley Park in Westfield. The Bombers displayed great spirit during their home opener. Rick Doiron, who served at the helm of the Westfield program over the past three years, now mentors new coach, Ben Hatch on his journey to push the team to greatness.
Westfield continues to drop race times as the season unfolds.
When asked about the team’s progress, senior captain Ben Jury responded: “All those hills are starting to pay off.”
Gabe Piepergerdes continued to lead the Bomber boys this season, hanging with some of the best runners in western Mass so far this season. With so many talented individuals in the area, how can one possibly be competitive? Senior captain Eric Johnson claimed to have the answer: “Don’t ask me why I run….. ask yourself, why you don’t!” – Courtesy of Benjamin Hatch