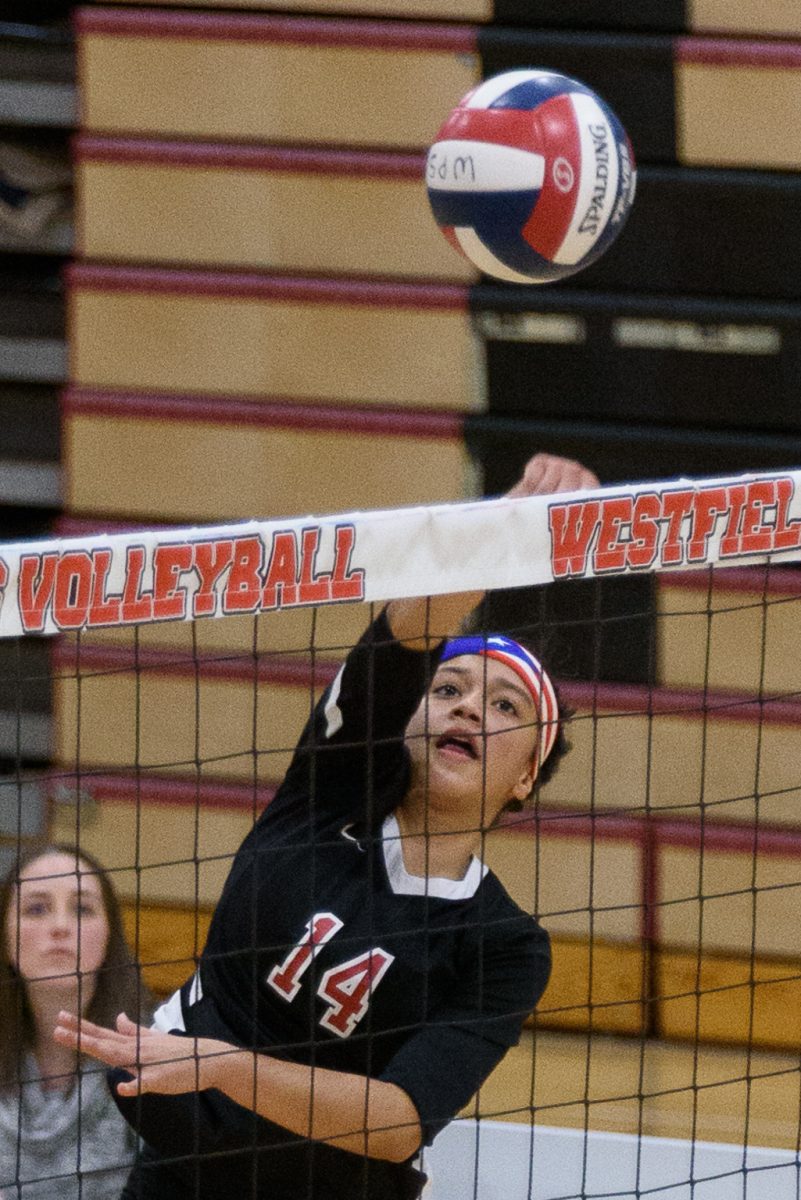 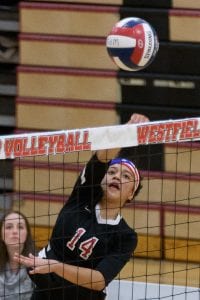 Irelis Rodriguez (14) sends one back for No. 4 Westfield during a West Division 2 girls volleyball quarterfinal against No. 12 Putnam Tuesday night. (Photo by Marc St. Onge)

WESTFIELD – Even the West Division 2 girls volleyball quarterfinal game between the Westfield Bombers and Putnam Beavers was too close to call.
No. 4 Westfield survived a potential Election Night upset, holding off 12th-seeded Putnam by a 3-1 margin of victory at home Tuesday. The Bombers narrowly avoided defeat, winning a thriller 25-21, 23-25, 25-19, 26-24.
“That 12 seed was not indicative of how good that team was,” Westfield girls volleyball head coach Tyler Wingate said.
Putnam was the last seed in the tournament field, but boasted a regular season record of 15-5. The Beavers upset the fifth-seeded Chicopee Pacers (14-5) in the first round of the tourney.
“We knew we were going to face a good opponent,” coach Wingate said. “They were playing well coming in. …They play really well together; they play their system. You have to remain really patient against a team like that because you’re going to get some opportunities.”
Westfield took advantage of its first chance, putting together a 9-3 lead with a 6-0 run behind some solid serves from Brigid Moriarty and a pair of kills from Viktoria Pavlyuk as Putnam still appeared to be settling in.
Putnam rallied to within three points of a tie seven more times in the set, but Westfield answered with a key play each time to remain firmly entrenched in the driver’s seat. Abigail Menzel found a crease in the middle of the defense deep near the end line for an ace. Irelis Rodriguez (16 kills, 17 digs) struck for a kill. Olivia Hadla and Maia Kelso converged for a shared block late in the set. Pavlyuk landed a kill to secure the first small victory.
The second set resembled an episode of Stranger Things as the Whip City’s world was turned upside down. Putnam controlled the pace of play, and squeaked out a two-point win.
This was no traditional double-digit sweep.
Like two prize fighters, the teams battled back and forth. The third set featured 10 ties and five lead changes. Putnam remained close with several tough digs. Westfield finally gained the upper hand by stretching the lead to two, 17-15. The Bombers never trailed again in the set and won with a bit more ease.
“It was a lot of ups and downs,” said Pavlyuk, who finished with 17 kills. “It was a little bit stressful, but we always fought back really well.”
The battle became even fiercer in the final frame as the two sides tied a whopping 11 times. There were seven lead changes.
Hadla, known for her acrobatic lay-ups and sharp-shooting from beyond the arc on the basketball court, provided a spark. With Hadla serving, Westfield reeled off five straight points to surge ahead 18-15. The Bombers went on a 4-0 run with Rodriguez serving to take a 22-16 advantage.
Putnam made one last gasp, tying the final set at 24-all. Westfield regrouped.
Pavlyuk tipped the ball onto Putnam’s side of the court for a one point lead, 25-24. Rodriguez smacked down the last dagger, a searing spike that sailed off the hands of a Beaver and out of bounds.
“I was just thinking put the ball in play no matter what,” Rodriguez said of the game-winning point. “Even if it’s a mistake … there’s always another opportunity.”
Rodriguez said every one of her teammates is there to pick each other up.
“It’s all about teamwork,” Rodriguez said. “If there’s not a team, there’s no pass, no set, no kills. My mindset was be in a good spot every single time. We all did what we had to do.”
Next on Westfield’s to-do list is a semifinal matchup against top-seeded, unbeaten Minnechaug (18-0) Thursday night at Chicopee Comprehensive High School at 6:30.
“There’s going to be good teams,” Rodriguez said. “You just have to play your best, and do just what we just did.”
Notes: Emily Gelinas had a solid night for Westfield, finishing with 35 assists, six kills, and three aces. Bombers’ Yanaira Henry collected seven digs.